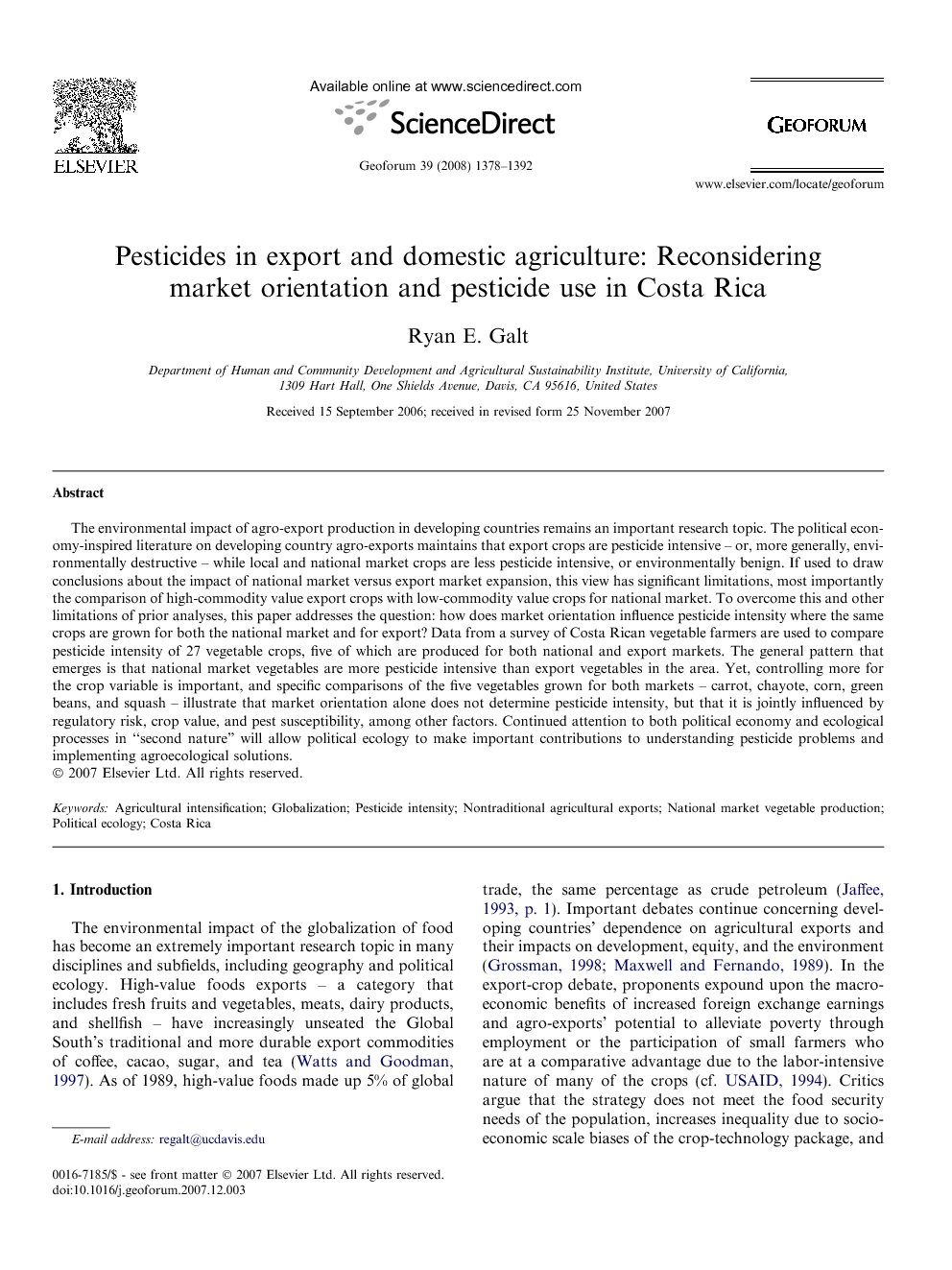 The environmental impact of agro-export production in developing countries remains an important research topic. The political economy-inspired literature on developing country agro-exports maintains that export crops are pesticide intensive – or, more generally, environmentally destructive – while local and national market crops are less pesticide intensive, or environmentally benign. If used to draw conclusions about the impact of national market versus export market expansion, this view has significant limitations, most importantly the comparison of high-commodity value export crops with low-commodity value crops for national market. To overcome this and other limitations of prior analyses, this paper addresses the question: how does market orientation influence pesticide intensity where the same crops are grown for both the national market and for export? Data from a survey of Costa Rican vegetable farmers are used to compare pesticide intensity of 27 vegetable crops, five of which are produced for both national and export markets. The general pattern that emerges is that national market vegetables are more pesticide intensive than export vegetables in the area. Yet, controlling more for the crop variable is important, and specific comparisons of the five vegetables grown for both markets – carrot, chayote, corn, green beans, and squash – illustrate that market orientation alone does not determine pesticide intensity, but that it is jointly influenced by regulatory risk, crop value, and pest susceptibility, among other factors. Continued attention to both political economy and ecological processes in “second nature” will allow political ecology to make important contributions to understanding pesticide problems and implementing agroecological solutions.

The environmental impact of the globalization of food has become an extremely important research topic in many disciplines and subfields, including geography and political ecology. High-value foods exports – a category that includes fresh fruits and vegetables, meats, dairy products, and shellfish – have increasingly unseated the Global South’s traditional and more durable export commodities of coffee, cacao, sugar, and tea (Watts and Goodman, 1997). As of 1989, high-value foods made up 5% of global trade, the same percentage as crude petroleum (Jaffee, 1993, p. 1). Important debates continue concerning developing countries’ dependence on agricultural exports and their impacts on development, equity, and the environment (Grossman, 1998 and Maxwell and Fernando, 1989). In the export-crop debate, proponents expound upon the macroeconomic benefits of increased foreign exchange earnings and agro-exports’ potential to alleviate poverty through employment or the participation of small farmers who are at a comparative advantage due to the labor-intensive nature of many of the crops (cf. USAID, 1994). Critics argue that the strategy does not meet the food security needs of the population, increases inequality due to socioeconomic scale biases of the crop-technology package, and is not sustainable due to its reliance on heavy agrichemical inputs which cause environmental degradation and serious human health problems (cf. Lappé et al., 1999). While sympathetic to critiques of agro-export dependence, here I argue that by exclusively focusing on export crops and neglecting to focus critical attention on the environmental impacts of national markets, the critical literature on the environmental effects of agro-exports makes empirically-questionable assumptions about pesticide use on crops bound for different markets.1 Specifically, the literature concludes that export crops are pesticide intensive2 – or, more generally, environmentally destructive – while local and national market crops are less pesticide intensive or environmentally benign (Barry, 1987, Thrupp, 1990, Thrupp, 1991, Thrupp, 1996, Thrupp et al., 1995 and Weir and Schapiro, 1981). While generally correct when pesticide intensity data are aggregated at a national level, these prior analyses face three important limitations in drawing conclusions about the local environmental effects of export versus domestic production. First, they compare very different crop types. Second, they assume that staple crops accurately represent domestic agricultural production. Third, they do not pay enough attention to the local social relations of exchange. This paper seeks to overcome these limitations by addressing the following question: how does market orientation influence pesticide intensity where the same or very similar crops are grown for both the national market and for export? To answer this question I explore together the effects of three important factors that vary by market orientation – regulatory risk,3 crop value, and pest susceptibilities – on the intensity of pesticide use on vegetable crops. Research methods involved fieldwork in the vegetable producing area of Northern Cartago and the Ujarrás Valley, Costa Rica (Fig. 1), where farmers produce more than 30 crops for the domestic and export market. The research combines an understanding of political economy in the area – especially the social relations of exchange in contract farming (cf. Clapp, 1994 and Watts, 1992) – with the use of a crop-specific perspective from human–environment geography (Sauer, 1969 and Zimmerer, 1996).The paper is organized as follows. I first review the critical literature on Latin American agro-exports to demonstrate the common view of market orientation and pesticide use. I then provide a brief conceptual revision of conventional wisdom to allow for better comparisons. Methods are then discussed, with most attention given to the farmer survey from which crop-specific pesticide intensity data were obtained. Results show that pesticide use on national market vegetable crops is generally higher than on exported vegetables in the study site, a situation I refer to as the “pesticide paradox”. Yet, looking beyond this general finding reveals considerable variability of pesticide intensity within market segments, leading me to problematize the binary thinking about pesticide use and market scale in developing countries. By examining specific crop comparisons, I suggest that regulatory risk, crop value, and pest susceptibility all jointly influence pesticide intensity, thereby making it inaccurate to draw conclusions about pesticide intensity based solely on market orientation. In the conclusion I discuss nuanced considerations about the environmental effects of markets, explore the geographical variability of the conventional wisdom on pesticide use and markets, and highlight the continued need for political ecologists to pay attention to material processes in “second nature,” defined by Biersack (2006) as nature that is humanly produced and that is part of, but not entirely within, the human realm.

The conventional wisdom in the critical literature about pesticide use and markets – that exports are pesticide inten- sive while national market crops are not – is too simplistic. While political economic influences are clearly important, pesticide intensity on crops within and between market seg- ment is highly variable. I have proposed that this variability is strongly influenced by the interactions of regulatory risk, crop value, and pest susceptibility, and likely other factors not discussed here. This study is not meant to refute all pre- vious political economic literature on export crops that argues that they are pesticide intensive. Indeed, Fig. 2 shows clearly that vegetable exports from Northern Cartago and the Ujarra ́ s Valley are more pesticide intensive than the average agricultural pesticide intensity in Costa Rica. Instead, this study addresses a blind spot in this literature that arises from the common comparison of high-commod- ity value, pest susceptible export crops to low-commodity value and typically pest resistant staple crops. I wish to conclude on three interrelated points. First, the conventional wisdom on pesticide use and markets is another example of the ‘‘scalar trap ” ( Brown and Purcell, 2005 ). While Brown and Purcell (2005) note that political ecologists and others in allied fields assume that local polit- ical control of resources results in more sustainable human– environment relations than organization at other scales, this paper reveals that the local trap is also evident in the litera- ture on the environmental effects of economic globalization and export market integration. Implied in the literature is that integration into local and national markets is less harm- ful to local environments than integration into the export market. Marx, in using the case of England to inform his ideas of the tendencies of capitalism, did not differentiate between market scale and socio-environmental impact: all progress in capitalist agriculture is a progress in the art, not only of robbing the worker, but of rob- bing the soil ... Capitalist production, therefore, only develops the techniques and degree of combination of the social process of production by simultaneously undermining the origin sources of all wealth – the soil and the worker. ( Marx, 1990, p. 638 ) My point is that before society reins in capitalist agricul- ture’s most egregious problems (cf. Polanyi, 1957 ), capital- ist agriculture, regardless of how distant its markets are, generally has detrimental environmental and social effects locally, especially when compared to non-capitalist modes of production based mostly on use value. Thus, Marx’s observations on the spread of capitalist relations in English agriculture serve to remind us that we should not forget that environmental degradation is created through the pen- etration of national markets as well as international mar- kets. National market expansion and regulation are important but severely understudied processes in most developing countries, though this is being remedied some- what through more attention to the expansion of super- markets in developing countries (e.g., Berdegue ́ et al., 2005 ). Many other topics of interest to political ecologists and environmental historians could be addressed through symmetrical comparisons of the environmental effects of export and national markets. These comparisons are likely to become more interesting with social movements’ contin- ued demand for increasingly regulated agri-food markets in industrialized countries and the often incipient expressions of these pressures in developing countries. Second, the geographical applicability of the narrative that national market farmers increased their pesticide use by producing for export markets is highly variable and depends strongly on the agricultural systems that existed before the spread of export market relationships. While the narrative fits staple crop producing areas, it is likely that farmers in national market vegetable production sys- tems in Latin America did not substantially change their pesticide use intensity since they swapped one high-com- modity value horticultural crop for another. Alternatively, in these national market horticultural areas, a process sim- ilar to that in Northern Cartago and the Ujarra ́ s Valley may have occurred in which they decreased their pesticide use as a way to conform to export market pesticide residue requirements. Thus, considerable opportunities exist in documenting location-specific cropping patterns, agro- environmental history, and social mediation of market requirements in order to understand the local environmen- tal impacts of changes in agro-export production and mar- ket orientation Lastly, these findings highlight the importance of eco- logical processes and interactions in the differential envi- ronmental outcomes of capitalist production, thereby resonating with a political ecology that pays considerable attention to these material processes and resists a merger with environmental politics that is based in the social sci- ences and humanities ( Walker, 2005 ). While the social sci- ence-based field of political economy of agriculture has shown the limits that natural processes place on the devel- opment of a capitalist agriculture in the industrial world ( Mann and Dickinson, 1978 ), we still lack a wider socio- environmental theorization of what geographers and polit- ical ecologists call ‘‘social nature ” ( FitzSimmons, 1989 )or ‘‘second nature ” ( Biersack, 2006 ) in industrialized and industrializing agriculture in developing countries. Diag- nosing pesticide problems and creating agroecologically- based solutions demand an integrated understanding of political economy and second nature ecology, a task to which political ecologists can greatly contribute