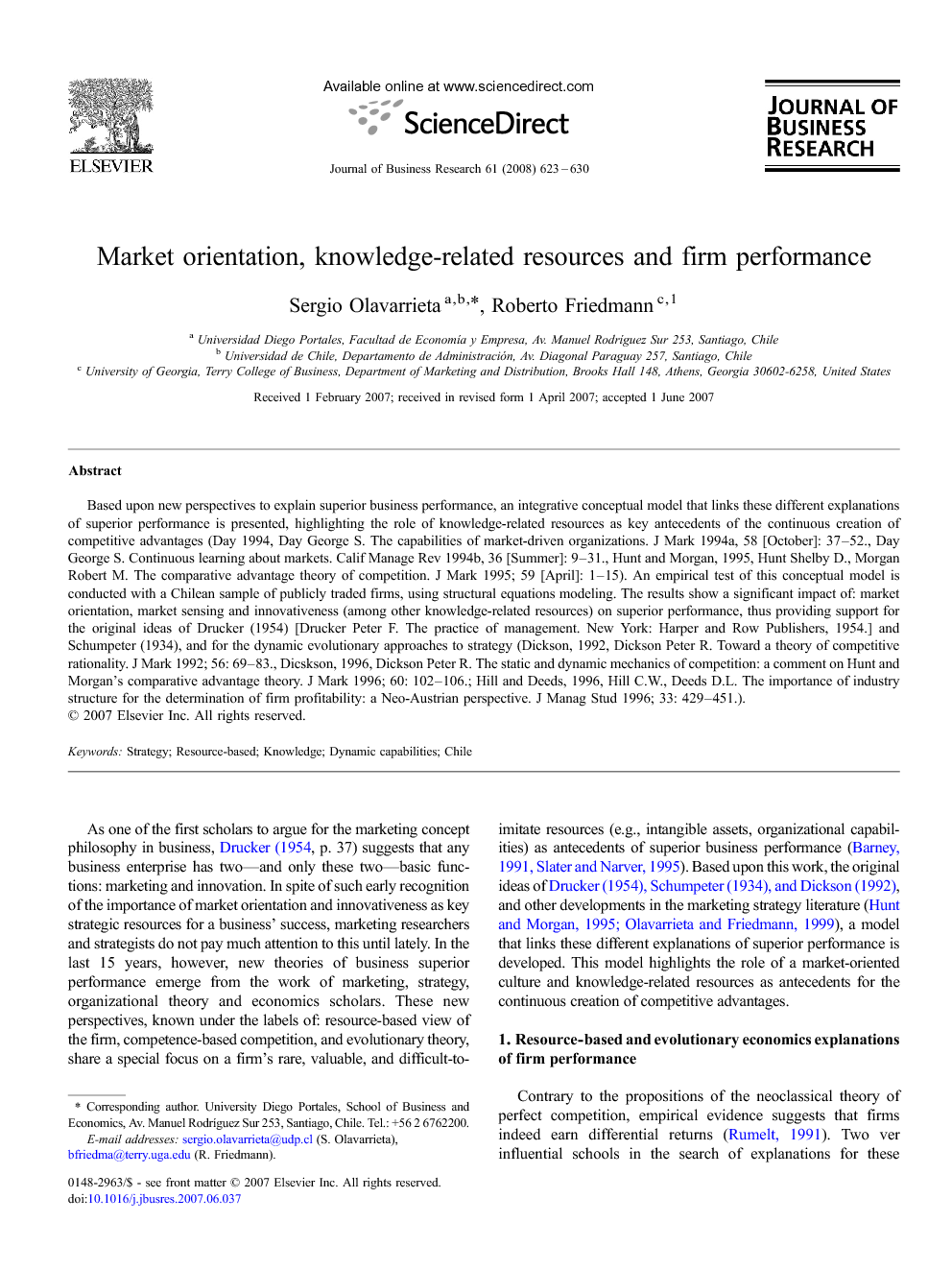 As one of the first scholars to argue for the marketing concept philosophy in business, Drucker (1954, p. 37) suggests that any business enterprise has two—and only these two—basic functions: marketing and innovation. In spite of such early recognition of the importance of market orientation and innovativeness as key strategic resources for a business' success, marketing researchers and strategists do not pay much attention to this until lately. In the last 15 years, however, new theories of business superior performance emerge from the work of marketing, strategy, organizational theory and economics scholars. These new perspectives, known under the labels of: resource-based view of the firm, competence-based competition, and evolutionary theory, share a special focus on a firm's rare, valuable, and difficult-to-imitate resources (e.g., intangible assets, organizational capabilities) as antecedents of superior business performance (Barney, 1991 and Slater and Narver, 1995). Based upon this work, the original ideas of Drucker, 1954, Schumpeter, 1934 and Dickson, 1992, and other developments in the marketing strategy literature (Hunt et al., 1995 and Olavarrieta and Friedmann, 1999), a model that links these different explanations of superior performance is developed. This model highlights the role of a market-oriented culture and knowledge-related resources as antecedents for the continuous creation of competitive advantages.

In summary, the model shows an acceptable level of fit and a reasonable representation of the data. The model explains 50% of the variance in overall firm performance and 46% of the variance in new product performance, the two key dependent variables in the study. These results provide support for theoretical explanations of firm performance based on firm-specific resources and dynamic capabilities approaches. Overall, the model indicates a significant effect of market orientation on firm performance, which is mediated by the role of knowledge-related resources. This study highlights the importance of a market-oriented culture and the possession of market-sensing skills to develop and foster innovativeness and imitation capabilities in an organization. These resources might very well be keys for the survival and success of the firm. In terms of the effects of a firm's knowledge-related resources on performance, organizational innovativeness appears to be the most important one, having significant associations with both overall firm performance and new product performance. As the hypotheses propose, reputation resources are also an important determinant of firm performance. Finally, market turbulence appears to have a moderating effect on the relationships between overall firm performance and market orientation, market-sensing capabilities, and imitation capabilities. These results are important because they empirically test theories developed mainly in the first world, in the context of a very vibrant Latin American marketplace. Becoming market-oriented does matter, and can have important effects on both new product performance and overall firm performance. Then, Latin American managers need to strengthen their efforts to continue transforming firms and more fully embrace a market-oriented culture. In that sense, a practical starting point for becoming market-oriented may be the measurement, and monitoring of market-oriented values and beliefs among employees, and the use of these scores in setting managers' objectives and compensation schemas. The study provides support for the ideas that building knowledge-related resources is strongly associated with market orientation. In other words, the construction of dynamic capabilities such as: market-sensing, innovation, and imitation capabilities, requires particular values and beliefs in the organization, linked to a special focus and attention on market forces. For firms in many Latin American countries, and for companies that have foreign market presence and/or exporting as the major sources of revenues, these findings impose higher challenges. These companies may need to develop a market-oriented culture not just constrained to their own national marketplaces but to the different foreign markets where they operate. This is a very real challenge that some firms are starting to realize the hard way. There are currently many examples of many Latin American firms, very successful in their national markets, which have experienced failures when expanding to neighboring countries. This too, has also happened in several occasions to U.S. and European retailers, entering Latin American markets (Bianchi, 2006). Value capturing resources, such as brands and companies' reputations, need to complement dynamic capabilities. Being innovative or having excellent benchmarking skills is just not enough; value in the marketplace also requires signaling to consumers through brands and reputation. Building strong brands, of course, requires a deep understanding of consumers and competitors' brands. Otherwise, establishing special, distinctive and strong connections with consumers' minds and hearts is a most difficult task. These managerial implications may also represent interesting avenues for research. As an example, further investigations can study the importance of particular and/or specific types of market orientation (e.g., responsive and proactive) on firm performance and new product success in the Latin American setting and other international settings.