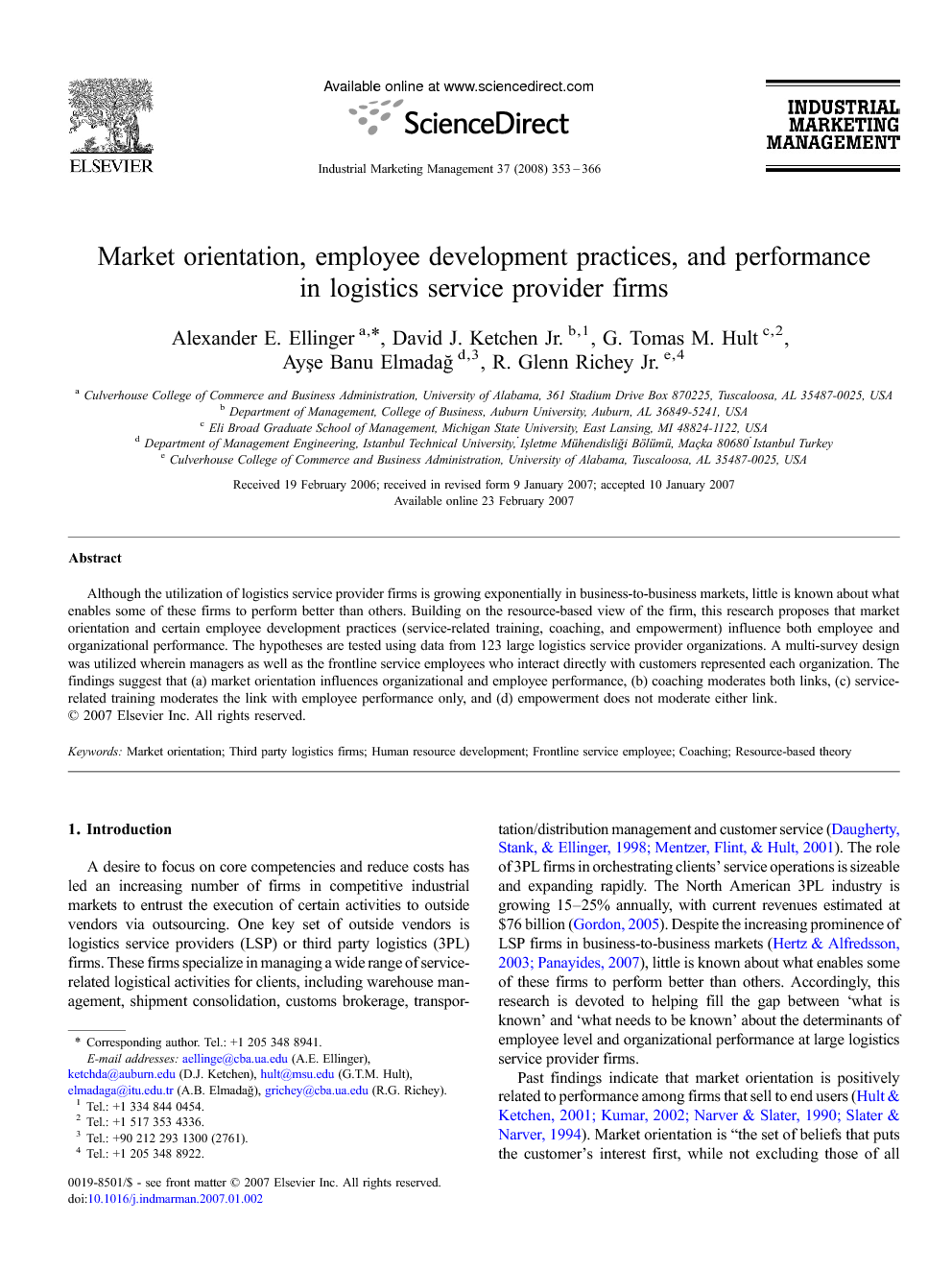 Although the utilization of logistics service provider firms is growing exponentially in business-to-business markets, little is known about what enables some of these firms to perform better than others. Building on the resource-based view of the firm, this research proposes that market orientation and certain employee development practices (service-related training, coaching, and empowerment) influence both employee and organizational performance. The hypotheses are tested using data from 123 large logistics service provider organizations. A multi-survey design was utilized wherein managers as well as the frontline service employees who interact directly with customers represented each organization. The findings suggest that (a) market orientation influences organizational and employee performance, (b) coaching moderates both links, (c) service-related training moderates the link with employee performance only, and (d) empowerment does not moderate either link.

A desire to focus on core competencies and reduce costs has led an increasing number of firms in competitive industrial markets to entrust the execution of certain activities to outside vendors via outsourcing. One key set of outside vendors is logistics service providers (LSP) or third party logistics (3PL) firms. These firms specialize in managing a wide range of service-related logistical activities for clients, including warehouse management, shipment consolidation, customs brokerage, transportation/distribution management and customer service (Daugherty et al., 1998 and Mentzer et al., 2001). The role of 3PL firms in orchestrating clients' service operations is sizeable and expanding rapidly. The North American 3PL industry is growing 15–25% annually, with current revenues estimated at $76 billion (Gordon, 2005). Despite the increasing prominence of LSP firms in business-to-business markets (Hertz and Alfredsson, 2003 and Panayides, 2007), little is known about what enables some of these firms to perform better than others. Accordingly, this research is devoted to helping fill the gap between ‘what is known’ and ‘what needs to be known’ about the determinants of employee level and organizational performance at large logistics service provider firms. Past findings indicate that market orientation is positively related to performance among firms that sell to end users (Hult and Ketchen, 2001, Kumar, 2002, Narver and Slater, 1990 and Slater and Narver, 1994). Market orientation is “the set of beliefs that puts the customer's interest first, while not excluding those of all other stakeholders such as owners, managers, and employees, in order to develop a long-term profitable enterprise” Deshpandé, Farley and Webster, (1993, p.27). Recent studies suggest that this concept offers a powerful tool for the field of industrial marketing (Beverland and Lindgreen, 2006, González-Benito and González-Benito, 2005 and Sanzo et al., 2002). Therefore, in attempting to build knowledge about the performance of LSP firms that are increasingly utilized by business-to-business organizations to execute service processes for competitive advantage, the concept of ‘market orientation’ is the phenomenon of interest. Although market orientation has attracted considerable attention in the business-to-business marketing literature, several important questions require further examination. First, recent studies recommend additional assessment of the influence of market orientation on LSP firm performance (Martin and Grbac, 2003, Mason et al., 2006 and Min and Mentzer, 2000). Second, the extent to which, if any, market orientation enhances employee level outcomes remains unclear (Raju & Lonial, 2001). Adding clarity here is especially important in the context of logistics service provision because the frontline orchestration of LSP firms' activities are their customer contact agents and managers who interact with manufacturer and supplier customers to ensure that the right products arrive in the right places at the right times (cf. Vickery, Jayaram, Droge, & Calantone, 2003). Third, extant market orientation research suffers from a ‘black box’ problem (cf. Lawrence, 1997). It seems unlikely that customers buy a service provider's products simply because the organization adopts a market orientation. Instead, market orientation can best enhance performance if process and procedures that support its implementation are put in place. Thus, consistent with evidence that effective human resource development influences performance (e.g., Huselid, 1995), the current research proposes that certain employee development practices (i.e., service-related training, coaching, and empowerment) intervene in the market orientation–performance relationship. The resource-based view provides the foundation for the assertion that market orientation can enhance performance. From this view, market orientation is an asset that is valuable, rare, and inimitable and as such it provides a competitive advantage to organizations that possess it (Barney, 1991 and Day, 1994). The positioning of employee development practices as moderators between market orientation and performance is consistent with Deshpandé, Farley and Webster's contention that market orientation is an underlying part of corporate culture whereby a “deeply rooted set of values and beliefs…consistently reinforce such a customer focus and pervade the organization (1993, p.27),” and with recent resource-based theorizing which argues that resources create value only in conjunction with supporting systems and processes (Barney and Mackey, 2005, Santos-Vijande et al., 2005 and Sirmon et al., 2007). According to these ideas, beliefs (such as market orientation) must be supported by behavioral processes (such as employee development practices) to influence outcomes. Thus, recent research in marketing innovation suggests that the coordinated efforts of employees and managers are required to develop a firm's market orientation through the manipulation and deployment of resources (Menguc & Auh, 2006). Given this process and action based perspective, a natural fit between market orientation and the resource-based view can be envisioned.

Other more managerially-oriented implications arise from the results related to the control variables and the varying influences of the employee development practices in the moderator hypotheses. Hours of formal training received and the employees' tenure in the customer service profession were both positively associated with employee performance. The first result adds further credence to the positive influence of respondents' perceptions of formal training that was found in our analyses; the second indicates that FLSEs who remain in customer service perform better, perhaps because they stay because they are well-suited to the profession. The negative association found between the age of the organization and employee performance suggests that the newer LSP provider firms in our sample may be doing a better job of hiring or developing their customer contact personnel. Hypothesis 2 predicted that the formal service-related training of FLSEs would positively influence the market orientation-performance link. The findings reveal that service-related training benefits employee performance (H2a), but not organizational performance (H2b). Stated differently, the results indicate that service-related training helps employees do their jobs better, but not in ways that affect the bottom-line. We also examined the relationship between employee performance and organizational performance. However, the correlation (.10) between these two constructs was not statistically significant. These findings are consistent with recent contentions that although ‘operational recipes’ of market orientation can improve performance, the benefits may not be completely captured by bottom-line measures of organizational performance (González-Benito & González-Benito, 2005). In this sense, formal service-related training serves primarily as ‘preventive care’ for market-oriented organizations, acting as an employee performance enhancer that contributes to the long-term viability of the firm. This notion is in line with the idea that market orientation is rooted in an organization's culture, and takes time to develop and/or change before seeing an effect on the bottom-line (e.g., Hult and Ketchen, 2001 and González-Benito and González-Benito, 2005). Accordingly, managers should view formal service-related training initiatives as investments in market orientation that pay off over time rather than as immediate enhancers of the firm's bottom-line. Hypothesis 3 also predicted that informal managerial coaching would positively influence the market orientation-performance link. This prediction was supported for both employee (H3a) and organizational performance (H3b). Thus, at least for the large LSP firms in the respondent sample, coaching is a key moderator. Conceptually, this is logical. Coaching's informal nature fits well with the intangible beliefs/values involved in market orientation. Indeed, drawing upon Deshpandé et al.'s (1993) perspective, perhaps the informal coaching of employees represents the ideal mechanism or catalyst for managers to consistently reinforce the customer focus that pervades a truly market-oriented organization. Returning to an earlier theme, the strength of coaching as a moderator suggests that market orientation alone can constitute a valuable and rare cultural resource, but when coaching is fitted to market orientation, the resource becomes inimitable and thus creates much more value and perhaps sustained value (cf. Barney, 1991). This is consistent with Goleman's (2000) observation that coaching is the most overlooked leadership style among managers. If subsequent research confirms the existence and importance of market orientation and coaching's confluence as a resource, this would represent a significant step toward delineating the cultural resources described by Barney (1986). Finally, Hypothesis 4 predicted that empowerment positively influences the links between market orientation and performance. This expectation failed to gain support for either employee or organizational performance. These results are, however, consistent with Hartline et al. (2000) finding that empowerment does not help disseminate the prioritization of customer service to employees. One interpretation is that firms empower employees only after other developmental practices have sufficiently pre-programmed the premises upon which employees will be making “autonomous” decisions. Accordingly, consistent with Batt's (1999) research, while FLSEs may be granted substantial discretion and encouraged to focus on service quality, there are powerful reminders and incentives aimed at ensuring that they also take organizational efficiency requirements into account. Thus, the results related to Hypothesis 4 suggest that empowerment should not be a focus of managers' or researchers' efforts to understand how market orientation may evolve as a resource in conjunction with supporting behavioral systems. In conclusion, drawing on the resource-based view, managerial coaching of FLSEs was found to strengthen the relationships between market orientation and employee and organizational performance, while formal service-related training of FLSEs was found to favorably influence only the market orientation–employee performance link, and empowerment did not significantly influence either link. In today's highly competitive and increasingly service-oriented industrial markets, deciding how to allocate scarce resources for maximum impact has become increasingly challenging. Thus, the overall implication of our findings for managers and researchers is that service provider firms' efforts to build superior performance in business-to-business markets depend not just on reinforcing market orientation with employee development practices, but on leveraging the most potent developmental practices. In particular, managerial coaching appears to be a very valuable and appropriate tool for extracting value from a market orientation.