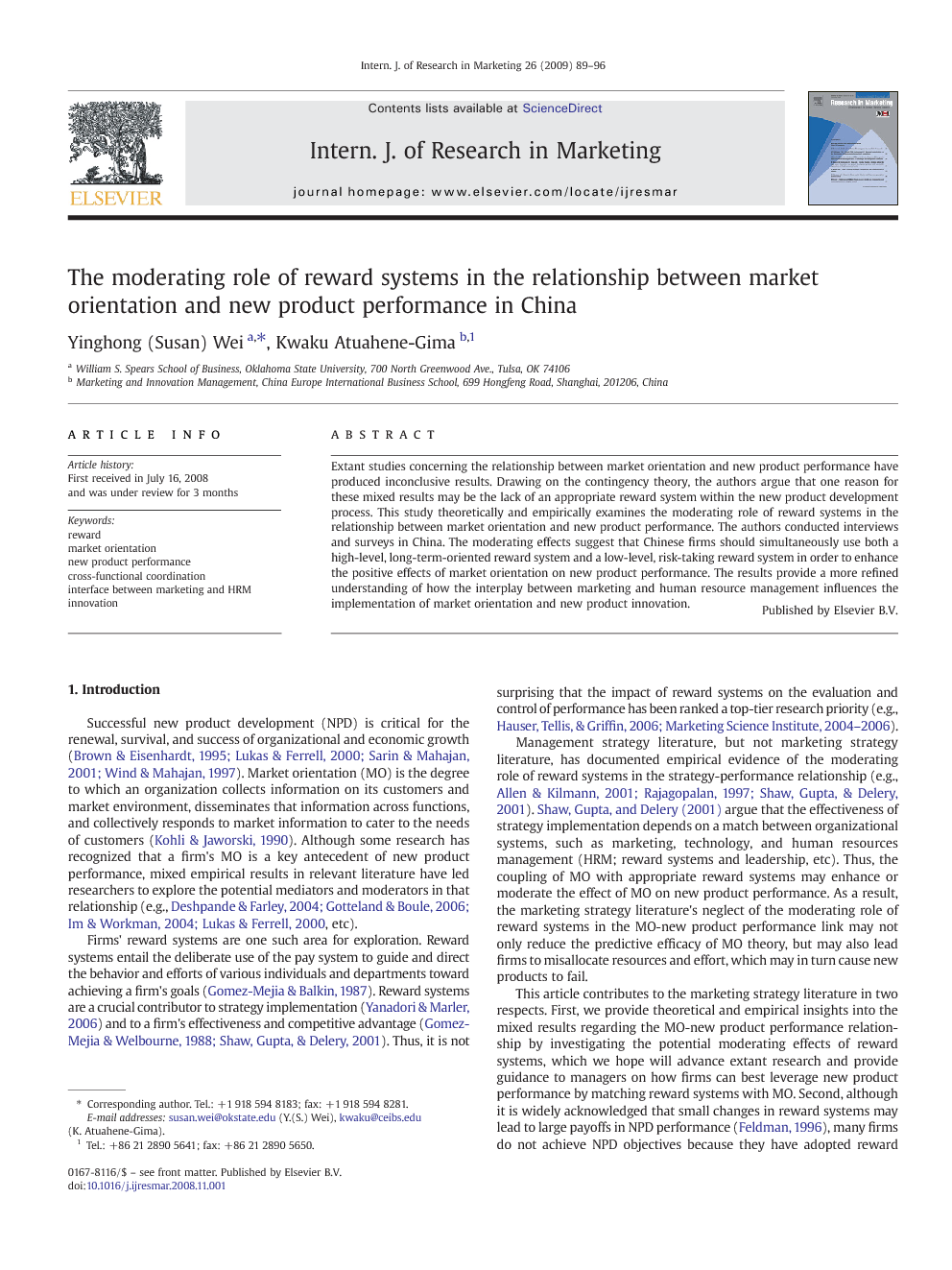 Successful new product development (NPD) is critical for the renewal, survival, and success of organizational and economic growth (Brown and Eisenhardt, 1995, Lukas and Ferrell, 2000, Sarin and Mahajan, 2001 and Wind and Mahajan, 1997, February). Market orientation (MO) is the degree to which an organization collects information on its customers and market environment, disseminates that information across functions, and collectively responds to market information to cater to the needs of customers (Kohli & Jaworski, 1990). Although some research has recognized that a firm's MO is a key antecedent of new product performance, mixed empirical results in relevant literature have led researchers to explore the potential mediators and moderators in that relationship (e.g., Deshpande and Farley, 2004, Gotteland and Boule, 2006, Im and Workman, 2004, April and Lukas and Ferrell, 2000, etc). Firms' reward systems are one such area for exploration. Reward systems entail the deliberate use of the pay system to guide and direct the behavior and efforts of various individuals and departments toward achieving a firm's goals (Gomez-Mejia & Balkin, 1987). Reward systems are a crucial contributor to strategy implementation (Yanadori & Marler, 2006) and to a firm's effectiveness and competitive advantage (Gomez-Mejia and Welbourne, 1988 and Shaw et al., 2001). Thus, it is not surprising that the impact of reward systems on the evaluation and control of performance has been ranked a top-tier research priority (e.g., Hauser et al., 2006 and Marketing Science Institute, 2004–2006). Management strategy literature, but not marketing strategy literature, has documented empirical evidence of the moderating role of reward systems in the strategy-performance relationship (e.g., Allen and Kilmann, 2001, Rajagopalan, 1997 and Shaw et al., 2001). Shaw, Gupta, and Delery (2001) argue that the effectiveness of strategy implementation depends on a match between organizational systems, such as marketing, technology, and human resources management (HRM; reward systems and leadership, etc). Thus, the coupling of MO with appropriate reward systems may enhance or moderate the effect of MO on new product performance. As a result, the marketing strategy literature's neglect of the moderating role of reward systems in the MO-new product performance link may not only reduce the predictive efficacy of MO theory, but may also lead firms to misallocate resources and effort, which may in turn cause new products to fail. This article contributes to the marketing strategy literature in two respects. First, we provide theoretical and empirical insights into the mixed results regarding the MO-new product performance relationship by investigating the potential moderating effects of reward systems, which we hope will advance extant research and provide guidance to managers on how firms can best leverage new product performance by matching reward systems with MO. Second, although it is widely acknowledged that small changes in reward systems may lead to large payoffs in NPD performance (Feldman, 1996), many firms do not achieve NPD objectives because they have adopted reward systems that are inappropriate for their strategic orientation or NPD approach (Sarin & Mahajan, 2001). Literature has documented the importance of the marketing, Research and Development (R&D), sales, and manufacturing interface (Leenders & Wierenga, 2008). The findings of this study, conducted in China, may improve the current level of marketing researchers' and managers' understanding of how an appropriate marketing-HRM interface influences NPD performance, which is the foundation of a firm's growth and success.