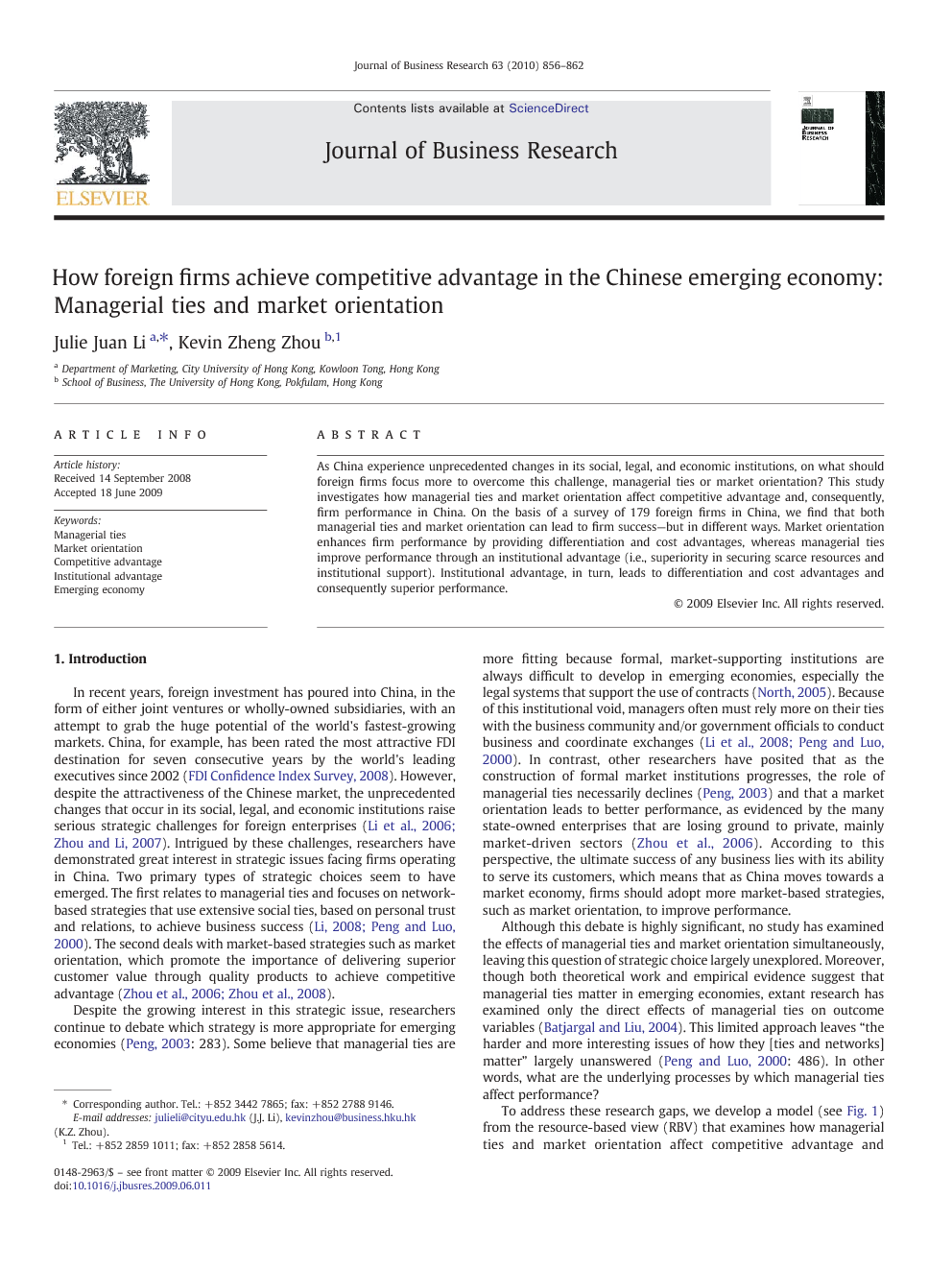 In recent years, foreign investment has poured into China, in the form of either joint ventures or wholly-owned subsidiaries, with an attempt to grab the huge potential of the world's fastest-growing markets. China, for example, has been rated the most attractive FDI destination for seven consecutive years by the world's leading executives since 2002 (FDI Confidence Index Survey, 2008). However, despite the attractiveness of the Chinese market, the unprecedented changes that occur in its social, legal, and economic institutions raise serious strategic challenges for foreign enterprises (Li et al., 2006 and Zhou and Li, 2007). Intrigued by these challenges, researchers have demonstrated great interest in strategic issues facing firms operating in China. Two primary types of strategic choices seem to have emerged. The first relates to managerial ties and focuses on network-based strategies that use extensive social ties, based on personal trust and relations, to achieve business success (Li, 2008 and Peng and Luo, 2000). The second deals with market-based strategies such as market orientation, which promote the importance of delivering superior customer value through quality products to achieve competitive advantage (Zhou et al., 2006 and Zhou et al., 2008). Despite the growing interest in this strategic issue, researchers continue to debate which strategy is more appropriate for emerging economies (Peng, 2003: 283). Some believe that managerial ties are more fitting because formal, market-supporting institutions are always difficult to develop in emerging economies, especially the legal systems that support the use of contracts (North, 2005). Because of this institutional void, managers often must rely more on their ties with the business community and/or government officials to conduct business and coordinate exchanges (Li et al., 2008 and Peng and Luo, 2000). In contrast, other researchers have posited that as the construction of formal market institutions progresses, the role of managerial ties necessarily declines (Peng, 2003) and that a market orientation leads to better performance, as evidenced by the many state-owned enterprises that are losing ground to private, mainly market-driven sectors (Zhou et al., 2006). According to this perspective, the ultimate success of any business lies with its ability to serve its customers, which means that as China moves towards a market economy, firms should adopt more market-based strategies, such as market orientation, to improve performance. Although this debate is highly significant, no study has examined the effects of managerial ties and market orientation simultaneously, leaving this question of strategic choice largely unexplored. Moreover, though both theoretical work and empirical evidence suggest that managerial ties matter in emerging economies, extant research has examined only the direct effects of managerial ties on outcome variables (Batjargal and Liu, 2004). This limited approach leaves “the harder and more interesting issues of how they [ties and networks] matter” largely unanswered (Peng and Luo, 2000: 486). In other words, what are the underlying processes by which managerial ties affect performance? To address these research gaps, we develop a model (see Fig. 1) from the resource-based view (RBV) that examines how managerial ties and market orientation affect competitive advantage and consequently firm performance. We suggest that in China, an important dimension of competitive advantage lies in a firm's superiority in securing scarce resources and institutional support, which we refer to as “institutional advantage.” For example, Li (2005) suggests that access to land, capital, and human resources is critical to business success in China. Luo (2007) indicates that support from local government is important because the legal system is not reliable and subject to particularism and personal accommodation. We argue that both managerial ties and market orientation can lead to firm success but that they accomplish this goal in different ways: Managerial ties foster firm performance through an institutional advantage, whereas market orientation enhances performance by achieving differentiation and cost advantages. Overall, our efforts aim to shed some light on how to overcome deleterious institutional challenges and achieve competitive advantage in the Chinese emerging economy.