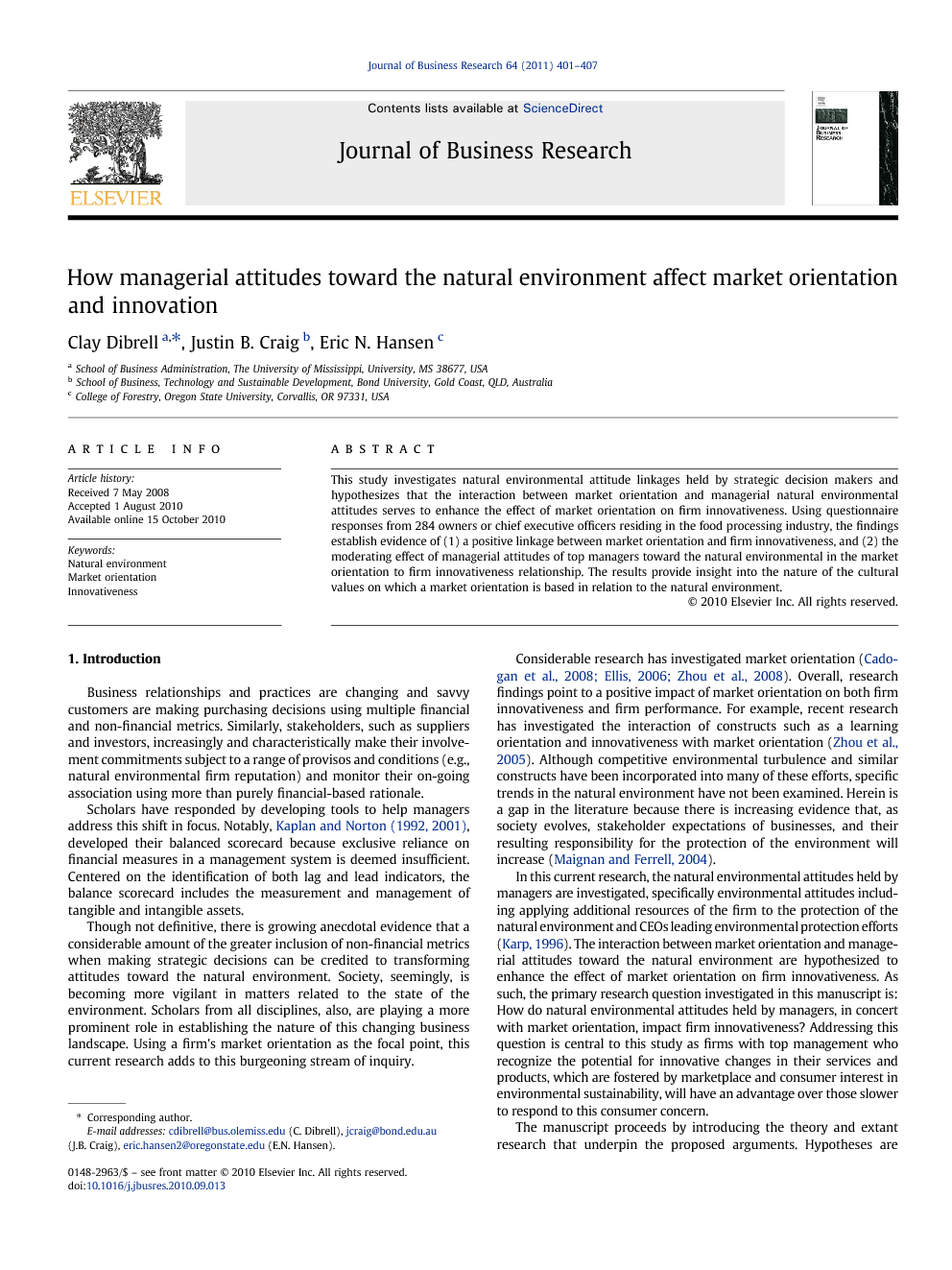 Business relationships and practices are changing and savvy customers are making purchasing decisions using multiple financial and non-financial metrics. Similarly, stakeholders, such as suppliers and investors, increasingly and characteristically make their involvement commitments subject to a range of provisos and conditions (e.g., natural environmental firm reputation) and monitor their on-going association using more than purely financial-based rationale. Scholars have responded by developing tools to help managers address this shift in focus. Notably, Kaplan and Norton, 1992 and Kaplan and Norton, 2001, developed their balanced scorecard because exclusive reliance on financial measures in a management system is deemed insufficient. Centered on the identification of both lag and lead indicators, the balance scorecard includes the measurement and management of tangible and intangible assets. Though not definitive, there is growing anecdotal evidence that a considerable amount of the greater inclusion of non-financial metrics when making strategic decisions can be credited to transforming attitudes toward the natural environment. Society, seemingly, is becoming more vigilant in matters related to the state of the environment. Scholars from all disciplines, also, are playing a more prominent role in establishing the nature of this changing business landscape. Using a firm's market orientation as the focal point, this current research adds to this burgeoning stream of inquiry. Considerable research has investigated market orientation (Cadogan et al., 2008, Ellis, 2006 and Zhou et al., 2008). Overall, research findings point to a positive impact of market orientation on both firm innovativeness and firm performance. For example, recent research has investigated the interaction of constructs such as a learning orientation and innovativeness with market orientation (Zhou et al., 2005). Although competitive environmental turbulence and similar constructs have been incorporated into many of these efforts, specific trends in the natural environment have not been examined. Herein is a gap in the literature because there is increasing evidence that, as society evolves, stakeholder expectations of businesses, and their resulting responsibility for the protection of the environment will increase (Maignan and Ferrell, 2004). In this current research, the natural environmental attitudes held by managers are investigated, specifically environmental attitudes including applying additional resources of the firm to the protection of the natural environment and CEOs leading environmental protection efforts (Karp, 1996). The interaction between market orientation and managerial attitudes toward the natural environment are hypothesized to enhance the effect of market orientation on firm innovativeness. As such, the primary research question investigated in this manuscript is: How do natural environmental attitudes held by managers, in concert with market orientation, impact firm innovativeness? Addressing this question is central to this study as firms with top management who recognize the potential for innovative changes in their services and products, which are fostered by marketplace and consumer interest in environmental sustainability, will have an advantage over those slower to respond to this consumer concern. The manuscript proceeds by introducing the theory and extant research that underpin the proposed arguments. Hypotheses are distilled, and the sample used to test these hypotheses is presented. Results precede the discussion and implications section, followed by limitations and future research.