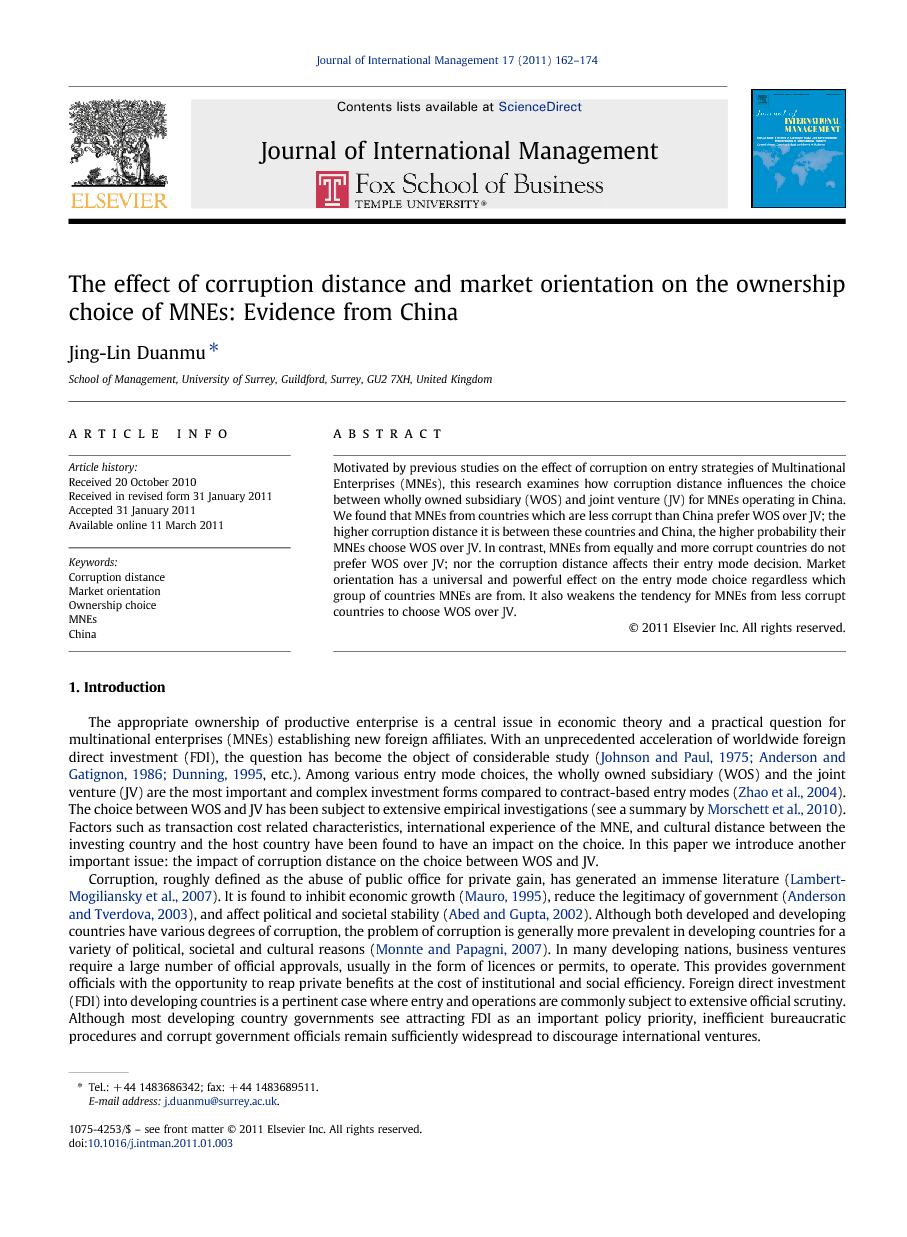 Motivated by previous studies on the effect of corruption on entry strategies of Multinational Enterprises (MNEs), this research examines how corruption distance influences the choice between wholly owned subsidiary (WOS) and joint venture (JV) for MNEs operating in China. We found that MNEs from countries which are less corrupt than China prefer WOS over JV; the higher corruption distance it is between these countries and China, the higher probability their MNEs choose WOS over JV. In contrast, MNEs from equally and more corrupt countries do not prefer WOS over JV; nor the corruption distance affects their entry mode decision. Market orientation has a universal and powerful effect on the entry mode choice regardless which group of countries MNEs are from. It also weakens the tendency for MNEs from less corrupt countries to choose WOS over JV.

The appropriate ownership of productive enterprise is a central issue in economic theory and a practical question for multinational enterprises (MNEs) establishing new foreign affiliates. With an unprecedented acceleration of worldwide foreign direct investment (FDI), the question has become the object of considerable study (Johnson and Paul, 1975, Anderson and Gatignon, 1986 and Dunning, 1995, etc.). Among various entry mode choices, the wholly owned subsidiary (WOS) and the joint venture (JV) are the most important and complex investment forms compared to contract-based entry modes (Zhao et al., 2004). The choice between WOS and JV has been subject to extensive empirical investigations (see a summary by Morschett et al., 2010). Factors such as transaction cost related characteristics, international experience of the MNE, and cultural distance between the investing country and the host country have been found to have an impact on the choice. In this paper we introduce another important issue: the impact of corruption distance on the choice between WOS and JV. Corruption, roughly defined as the abuse of public office for private gain, has generated an immense literature (Lambert-Mogiliansky et al., 2007). It is found to inhibit economic growth (Mauro, 1995), reduce the legitimacy of government (Anderson and Tverdova, 2003), and affect political and societal stability (Abed and Gupta, 2002). Although both developed and developing countries have various degrees of corruption, the problem of corruption is generally more prevalent in developing countries for a variety of political, societal and cultural reasons (Monnte and Papagni, 2007). In many developing nations, business ventures require a large number of official approvals, usually in the form of licences or permits, to operate. This provides government officials with the opportunity to reap private benefits at the cost of institutional and social efficiency. Foreign direct investment (FDI) into developing countries is a pertinent case where entry and operations are commonly subject to extensive official scrutiny. Although most developing country governments see attracting FDI as an important policy priority, inefficient bureaucratic procedures and corrupt government officials remain sufficiently widespread to discourage international ventures. Motivated by previous studies, we attempt to explore the effect of corruption distance on the ownership choice of MNEs operating in China. Our study departs from the existing literature in two principal respects. First, we propose that the direction of corruption distance matters. That is, relative to a given host country, MNEs from more corrupt and less corrupt countries may react differently to corruption in the host environment. Second, we study whether corruption distance between host and home country of MNE increases the preference of WOS over JV. In addition, we investigate whether MNEs establishing local market oriented affiliates and those establishing export oriented affiliates react to corruption distance differently. Current literature on the relationship between corruption and ownership choice has not considered this issue. But recent FDI studies have found that local market oriented FDI (also called horizontal FDI) and export-oriented FDI (also called vertical FDI) tend to be motivated by very different factors (e.g. Markusen and Maskus, 2002). Therefore, horizontal FDI and vertical FDI may have different responses to the host country institutional attributes such as the relative level of corruption in the host environment. Last but not least, we assess whether corruption distance and market orientation interact with each other in the process of entry mode decision. China has become one of the top FDI recipient countries in the world; yet surprisingly limited research has been conducted to understand whether and how corruption in China affects entry strategies of MNEs. The rapid economic development that China has achieved so far by no means suggests that corruption is diminishing in this country. Instead, some scholars are concerned that corruption in China is becoming systemic (Root, 1996 and Cheung, 1996). While there might be a host range of issues which are affected by corruption, we attempt to provide one of the first empirical investigations on the impact of corruption distance on the choice of entry mode of MNEs in China. This is a question of both empirical and practical significance to researchers, policy makers and MNEs in China. FDI regulations in China have long geared towards macroeconomic goal of promoting technology transfer and market competition. Therefore, policy makers may like to know how the relative corruption level in China affects the ownership structure of FDI projects because the structure affects the incentives of the foreign investors to apply their resources to the project, the degree of technology transfer, and the distribution of gains from FDI. For MNEs, ownership structure has a fundamental effect on how they allocate and control resources, coordinate with other parts of the corporation, and the prosperity of their operation in the host country. The remainder of the paper is organized as follows. We review the literature on corruption and its impact on the global expansion of MNEs in Section 2. This in turn motivates the key hypotheses of the paper. We then introduce our empirical strategy in Section 3. Empirical results are reported in Section 4. Finally, we discuss and conclude our paper in Section 5.

We now sum up our results. First of all, we found substantial evidence suggesting the direction of corruption distance matters. MNEs from less corrupt countries, compared to their peers from equally or more corrupt countries, prefer WOS over JV as their entry strategy. The larger the corruption distance between their home countries and China, the more likely they favor WOS over JV. Local market oriented operations are more likely to be JVs regardless whether the MNE is from more or less corrupt country. However, the tendency of MNEs from less corrupt countries to prefer WOS decreases with an increased level of local market orientation. Our study supports Tekin-Koru's (2006) finding that corruption distance leads MNEs to prefer WOS over JV. In addition, our study explores the impact of corruption distance in addition to corruption directions and also controls for project level variables that have shown to have significant power in predicting the entry mode choice of MNEs, which were not considered in Tekin-Koru (2006). Another interesting finding in our analysis is that the home country's rule of law system influences its MNEs decision making regarding entry mode choice. MNEs from countries with stronger rule of law favor collaborating with local firms perhaps to avoid potential difficulties that may arise due to substandard quality of contract enforcement, property rights protection, and the function of court in China. As the Chinese government has been constantly encouraging the formation of joint ventures between foreign firms and indigenous Chinese firms in the hope that it will accelerate potential knowledge spillovers from FDI, our study suggests that reducing the prevailing corruption will help the government to attain its purpose. Although the huge consumer base has helped China in inducing MNEs to establish joint ventures so far, an improvement in the country-wide institutional environment would no doubt provide more confidence for MNEs to consider whether to set up more joint ventures in China. From MNEs' perspective, especially those from transparent countries, a wholly owned subsidiary gives them higher control over the way their business and operations are organized and conducted. The extra cost that may occur to deal with corrupt environment could be justified considering the significant implications of protecting and sustaining their corporate governance and global image. Conflict with local partners regarding how to deal with corrupt officials could be equally or more taxing than resisting them in their own way. The bargaining power of MNEs, especially those large ones from developed nations, makes it all the more likely that they will encounter less corruption in the process of entry because they are usually the targets that many local governments compete to attract and appeal to. Therefore, MNE managers may consider WOS if they plan to enter the Chinese market given the multiple benefits that it brings. Joint venture can be a win–win strategy, but MNE managers will have to ensure that their local partners will comply with their corporate business code to protect their global image. In this regard, selecting a suitable business partner is essential to ensure a successful long-term cooperation if a partnership with local firms is perceived to be important for the subsidiary's success. For MNEs from corrupt countries, although our analysis shows that corruption is not significant in their entry mode decision equation, their managers will still have to manage the additional cost in dealing with corrupt business environment alone or with local partners. Higher level of local market orientation justifies joining forces with local partners, as our analysis suggests, but MNE managers need to ascertain that local partners indeed help lower the burden of corrupt business environment as well as contribute their local market knowledge and expertise. Future research can seek to establish whether there is a causal relation between the choice of entry mode and the performance of MNEs in China. A formal assessment of that type would provide MNEs with a more precise guide on how to design their entry strategies. In addition, future studies can examine whether there is a learning effect with respect to MNE's entry strategies. Do MNEs respond to corruption differently in their repeated investment in China? Do they learn from their peers in the same industry, or from same home country, regarding which entry mode to choose to best deal with corruption? A systematic examination of these questions will undoubtedly provide a more dynamic understanding of how corruption in China influences MNEs' strategies.