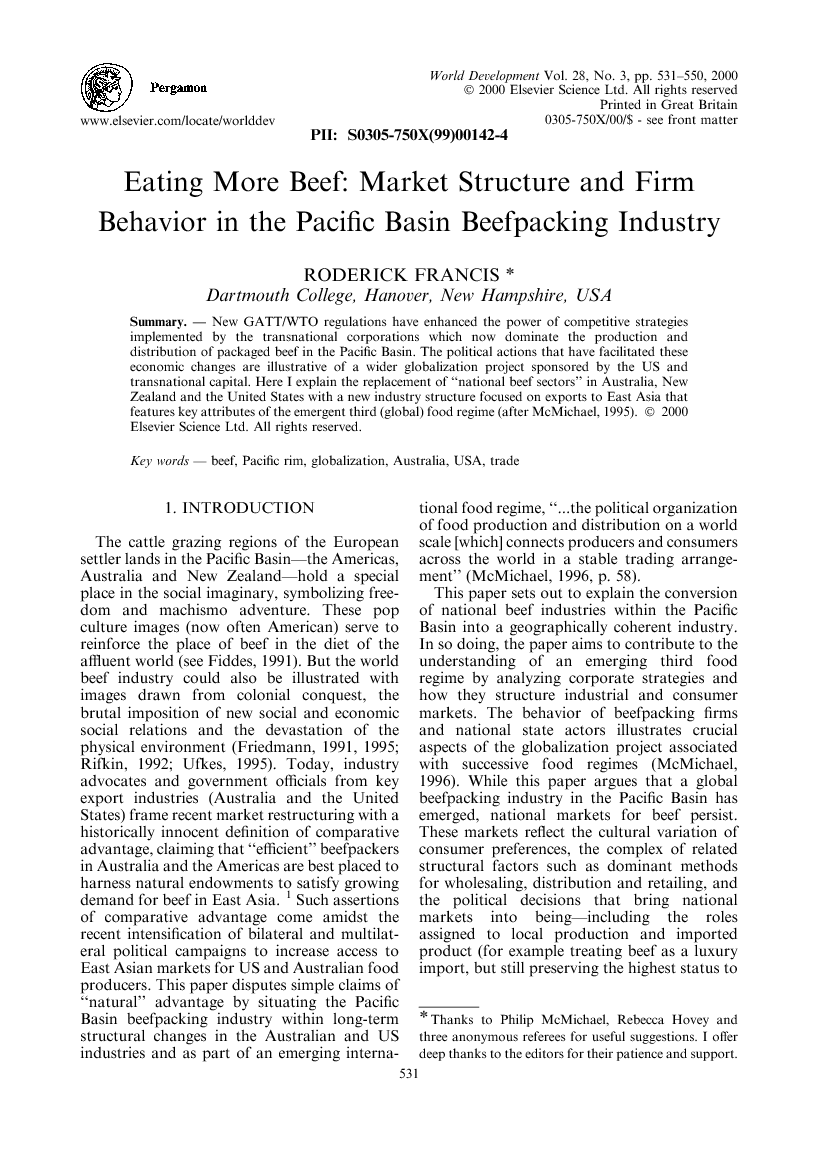 New GATT/WTO regulations have enhanced the power of competitive strategies implemented by the transnational corporations which now dominate the production and distribution of packaged beef in the Pacific Basin. The political actions that have facilitated these economic changes are illustrative of a wider globalization project sponsored by the US and transnational capital. Here I explain the replacement of “national beef sectors” in Australia, New Zealand and the United States with a new industry structure focused on exports to East Asia that features key attributes of the emergent third (global) food regime (after McMichael, 1995).

The cattle grazing regions of the European settler lands in the Pacific Basin—the Americas, Australia and New Zealand—hold a special place in the social imaginary, symbolizing freedom and machismo adventure. These pop culture images (now often American) serve to reinforce the place of beef in the diet of the affluent world (see Fiddes, 1991). But the world beef industry could also be illustrated with images drawn from colonial conquest, the brutal imposition of new social and economic social relations and the devastation of the physical environment Friedmann, 1991, Friedmann, 1995, Rifkin, 1992 and Ufkes, 1995. Today, industry advocates and government officials from key export industries (Australia and the United States) frame recent market restructuring with a historically innocent definition of comparative advantage, claiming that “efficient” beefpackers in Australia and the Americas are best placed to harness natural endowments to satisfy growing demand for beef in East Asia.1 Such assertions of comparative advantage come amidst the recent intensification of bilateral and multilateral political campaigns to increase access to East Asian markets for US and Australian food producers. This paper disputes simple claims of “natural” advantage by situating the Pacific Basin beefpacking industry within long-term structural changes in the Australian and US industries and as part of an emerging international food regime, “...the political organization of food production and distribution on a world scale [which] connects producers and consumers across the world in a stable trading arrangement” (McMichael, 1996, p. 58). This paper sets out to explain the conversion of national beef industries within the Pacific Basin into a geographically coherent industry. In so doing, the paper aims to contribute to the understanding of an emerging third food regime by analyzing corporate strategies and how they structure industrial and consumer markets. The behavior of beefpacking firms and national state actors illustrates crucial aspects of the globalization project associated with successive food regimes (McMichael, 1996). While this paper argues that a global beefpacking industry in the Pacific Basin has emerged, national markets for beef persist. These markets reflect the cultural variation of consumer preferences, the complex of related structural factors such as dominant methods for wholesaling, distribution and retailing, and the political decisions that bring national markets into being—including the roles assigned to local production and imported product (for example treating beef as a luxury import, but still preserving the highest status to culturally specific local production such as Waygu beef in Japan). Although the notion that markets are only brought into being through a large number of political actions is readily accepted in social science, such a claim still clashes with much mainstream neoclassical literature. As a way of encountering this and the market fetishism of much neoliberal ideology this paper argues for understanding markets as social constructs—not as some “natural” entity which exists prior to the model or investigation (see Mirowski, 1994, McCloskey, 1989 and McCloskey, 1994). The US and Australian governments have exerted considerable negotiating power on behalf of the beefpacking industry to “open” markets in East Asia. Ironically such actions simply redirect “managed trade”—a derisory term often applied by US trade negotiators to describe the role of East Asian national governments. For their part the governments of Japan, South Korea and Taiwan have protected small indigenous beef industries and subsidized the importation of feed to maintain these culturally important and politically powerful industries. At the same time large Japanese keiretsu with trading houses, domestic distribution businesses and diverse agribusiness holdings throughout the Pacific Basin (e.g., Mitsubishi, Nippon Meats) have become significant importers of Australian and US-grown beef Bolling, 1991, Morison, 1993 and Francis, 1997. These businesses also exert significant influence on the decision–making processes of the Japanese state, ultimately effecting the structure of the whole Pacific Basin industry. Meanwhile US corporations such as IBP, ConAgra and Cargill have extracted a wide range of tax concessions and other benefits from the state and federal governments of Australia, Argentina, Brazil and the United States, influencing business plans and the space economy of the industry. Firm strategy has a long-term effect on industry structure and has the most immediate influence on labor conditions within the industry and the manner in which beef is consumed. In a further disruption of mainstream neoclassical economics analytical categories I adopt methodologies from industrial organization theory and related industrial geography literature to analyze firm-level behavior in this period of globalization. My purpose is to reveal how ideological and political factors cannot be readily separated from the actions of firms as economic agents. A further justification for concentrating on firms as economic agents is the need to better understand how the relentless pursuit of scale economies is one of the most significant forces shaping the structure of the industry. Indeed it is this attribute that compels firms to find new markets or increase demand for beef products in existing markets. The realization of increasing returns to scale also helps explain the periodic crises of overcapacity (idle plant), the constant striving for technological innovations (improving efficiency) and the repressive approaches to worker unionization efforts (“labor management”). On a day-to-day basis it is these issues that affect workers, farmers and consumers most directly and ensure that a handful of firms enjoy high levels of market power. Indeed it is this structural attribute that beefpacking shares with other manufacturing industries and why consumers are urged to eat more beef.