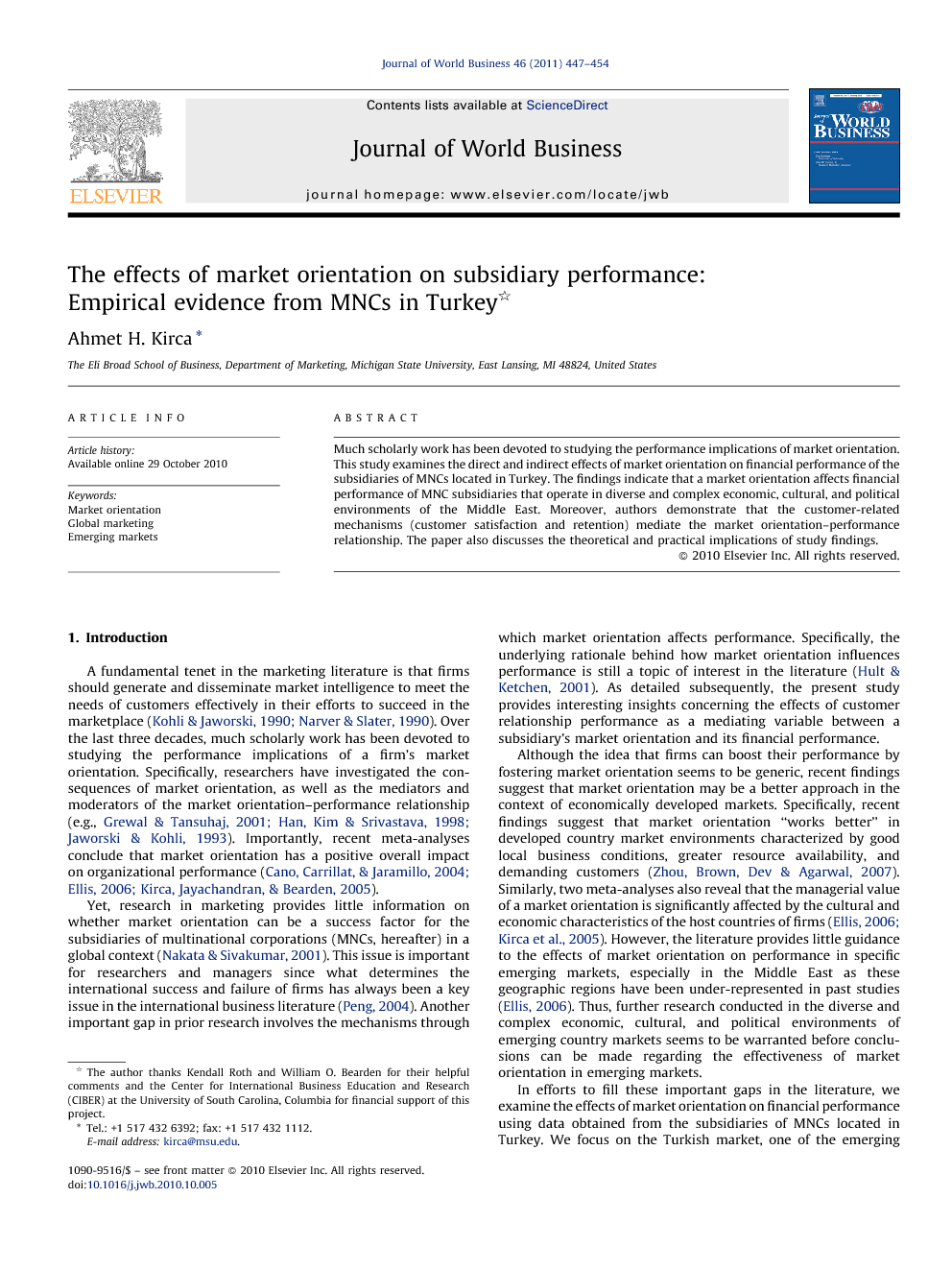 A fundamental tenet in the marketing literature is that firms should generate and disseminate market intelligence to meet the needs of customers effectively in their efforts to succeed in the marketplace (Kohli and Jaworski, 1990 and Narver and Slater, 1990). Over the last three decades, much scholarly work has been devoted to studying the performance implications of a firm's market orientation. Specifically, researchers have investigated the consequences of market orientation, as well as the mediators and moderators of the market orientation–performance relationship (e.g., Grewal and Tansuhaj, 2001, Han et al., 1998 and Jaworski and Kohli, 1993). Importantly, recent meta-analyses conclude that market orientation has a positive overall impact on organizational performance (Cano et al., 2004, Ellis, 2006 and Kirca et al., 2005). Yet, research in marketing provides little information on whether market orientation can be a success factor for the subsidiaries of multinational corporations (MNCs, hereafter) in a global context (Nakata & Sivakumar, 2001). This issue is important for researchers and managers since what determines the international success and failure of firms has always been a key issue in the international business literature (Peng, 2004). Another important gap in prior research involves the mechanisms through which market orientation affects performance. Specifically, the underlying rationale behind how market orientation influences performance is still a topic of interest in the literature (Hult & Ketchen, 2001). As detailed subsequently, the present study provides interesting insights concerning the effects of customer relationship performance as a mediating variable between a subsidiary's market orientation and its financial performance. Although the idea that firms can boost their performance by fostering market orientation seems to be generic, recent findings suggest that market orientation may be a better approach in the context of economically developed markets. Specifically, recent findings suggest that market orientation “works better” in developed country market environments characterized by good local business conditions, greater resource availability, and demanding customers (Zhou, Brown, Dev & Agarwal, 2007). Similarly, two meta-analyses also reveal that the managerial value of a market orientation is significantly affected by the cultural and economic characteristics of the host countries of firms (Ellis, 2006 and Kirca et al., 2005). However, the literature provides little guidance to the effects of market orientation on performance in specific emerging markets, especially in the Middle East as these geographic regions have been under-represented in past studies (Ellis, 2006). Thus, further research conducted in the diverse and complex economic, cultural, and political environments of emerging country markets seems to be warranted before conclusions can be made regarding the effectiveness of market orientation in emerging markets. In efforts to fill these important gaps in the literature, we examine the effects of market orientation on financial performance using data obtained from the subsidiaries of MNCs located in Turkey. We focus on the Turkish market, one of the emerging country markets in an exclusive location at the crossroads of Europe and Asia, because Turkey is the largest industrial economy in Eastern Europe, the Balkans, and the Middle East. Turkey has attracted substantial amounts of foreign direct investment in the last few years (Demirbag, Tatoglu, & Glaister, 2008). Moreover, the Turkish context provides an interesting and rich research setting for our purposes because Turkish business environment represents a diverse and complex setting for global companies as a unique country with its Western market style economy and Muslim cultural heritage (Demirbag et al., 2007 and Kabasakal and Bodur, 2002). Finally, the characteristics of the Turkish market environment provide a good case to investigate the market orientation of MNC subsidiaries because Turkey is an emerging market characterized by high economic growth, rapidly growing population, relatively low resource availability and customer demandingness. As such, Turkey is at an earlier stage of economic development compared to the markets in advanced economies (Demirbag et al., 2007 and Zhou et al., 2007). The present manuscript is organized as follows. To begin, after a brief literature review we offer a conceptual framework that provides the theoretical rationale for the effects of market orientation on firm performance in Turkey, as well as the hypotheses which guide our research. Then, the research design and methods of the study along with the results, the major findings, and their implications are discussed.