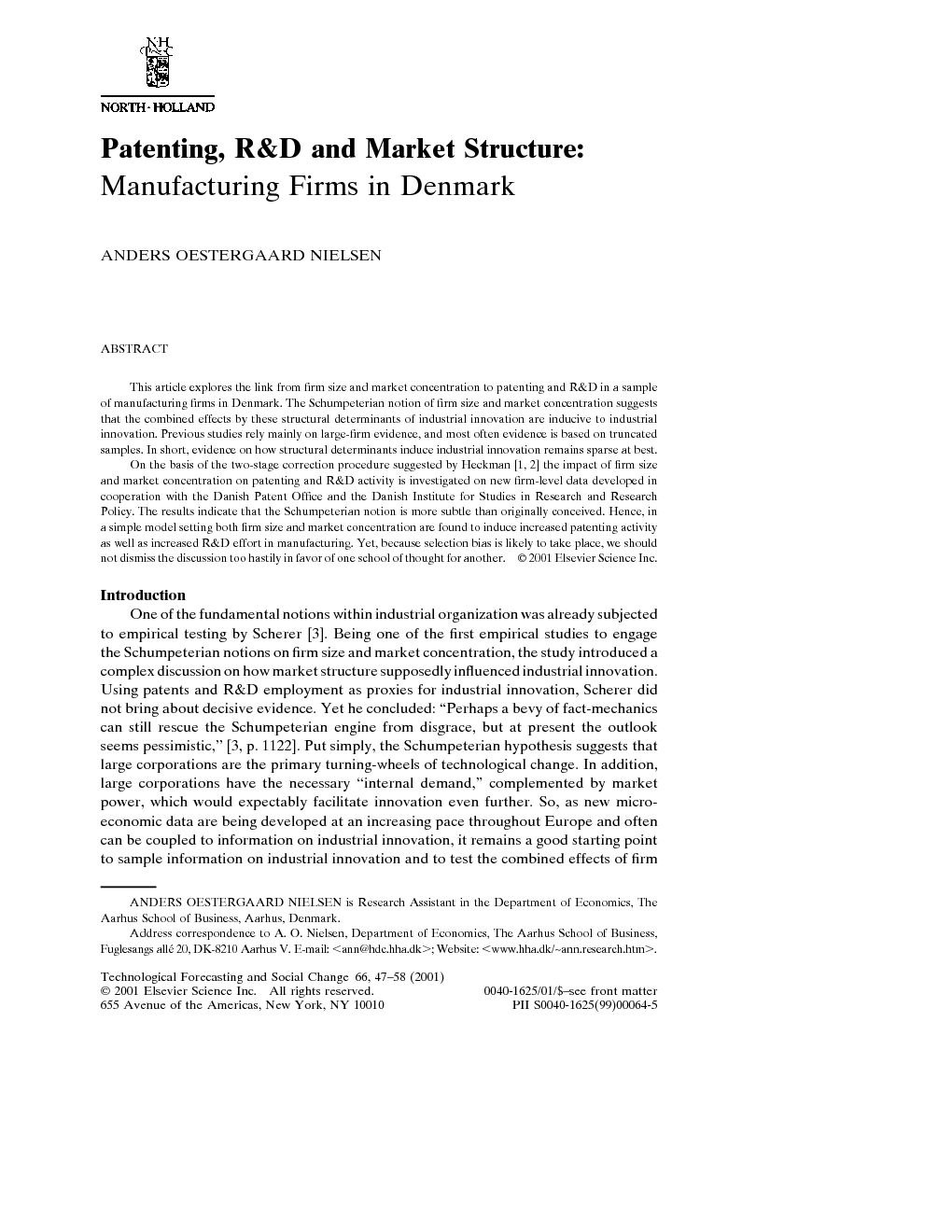 This article explores the link from firm size and market concentration to patenting and R&D in a sample of manufacturing firms in Denmark. The Schumpeterian notion of firm size and market concentration suggests that the combined effects by these structural determinants of industrial innovation are inducive to industrial innovation. Previous studies rely mainly on large-firm evidence, and most often evidence is based on truncated samples. In short, evidence on how structural determinants induce industrial innovation remains sparse at best. On the basis of the two-stage correction procedure suggested by Heckman 1 and 2 the impact of firm size and market concentration on patenting and R&D activity is investigated on new firm-level data developed in cooperation with the Danish Patent Office and the Danish Institute for Studies in Research and Research Policy. The results indicate that the Schumpeterian notion is more subtle than originally conceived. Hence, in a simple model setting both firm size and market concentration are found to induce increased patenting activity as well as increased R&D effort in manufacturing. Yet, because selection bias is likely to take place, we should not dismiss the discussion too hastily in favor of one school of thought for another.

One of the fundamental notions within industrial organization was already subjected to empirical testing by Scherer [3]. Being one of the first empirical studies to engage the Schumpeterian notions on firm size and market concentration, the study introduced a complex discussion on how market structure supposedly influenced industrial innovation. Using patents and R&D employment as proxies for industrial innovation, Scherer did not bring about decisive evidence. Yet he concluded: “Perhaps a bevy of fact-mechanics can still rescue the Schumpeterian engine from disgrace, but at present the outlook seems pessimistic,” [3, p. 1122]. Put simply, the Schumpeterian hypothesis suggests that large corporations are the primary turning-wheels of technological change. In addition, large corporations have the necessary “internal demand,” complemented by market power, which would expectably facilitate innovation even further. So, as new micro-economic data are being developed at an increasing pace throughout Europe and often can be coupled to information on industrial innovation, it remains a good starting point to sample information on industrial innovation and to test the combined effects of firm size and market concentration. For further readings, see Soete [4], Cohen and Levin [5], and Baldwin and Scott [6]. Three decades after Scherer began looking for structural determinants of technological change, we realize that our insights regarding the incentives for firms to innovate and how they distinguish themselves compared to non-innovating firms remain sporadic. In Denmark, for example, only a few explorative studies on the patenting activity of firms residing in Denmark have been carried out since the late 1980s. However, within recent years, the computerization of commercial online patent databases has provided economic research an improved opportunity to retrieve large amounts of information on patents filed worldwide. Patent data are compiled by patent organizations, such as the European Patent Office, as well as other commercial patent databases designed for novice investigation of the current statue of patent applications. For the purpose of studying patenting firms in Denmark, a database containing a naturally confined sample of patenting firms filing applications according to the European Patent Treaty was developed during 1996–1997 as part of a three-stage research strategy. The first stage investigated the total distribution of active patents issued to firms or persons with domicile in Denmark according to their application dates. On this basis, patents were additionally tracked by the first filing countries evaluating the initial pattern of designated countries by patenting firms and persons with domicile in Denmark. The second stage consisted of developing a database of the patenting activity of firms with domicile in Denmark, filing applications according to the European Patent Treaty. The raw data were retrieved from the INPADOC online database situated in Vienna, which is administered by the European Patent Office. The third stage was initiated in March 1998, and resulted in a full-scale patent database containing the total patent stock of firms or persons with domicile in Denmark. By autumn of 1998, the patent database was operative as the result of three years' co-operation with the Danish Patent Office. This article takes advantage of the Danish Patent Database for Economic Research and presents results from a follow-up study on the incentive for firms to become patent-active. Previous results from the United States and Great Britain, on firms' incentives to patent are based on truncated data and mainly on large firms. This article therefore investigates the potential bias that is likely to arise when, for example, industry-level variables according to market concentration are included in an empirical model of industrial innovation. According to the two-stage procedure suggested by Heckman 1 and 2, potential selection bias can be captured in terms of a specification error. This procedure takes advantage of the properties of the binary Probit procedure. As the available sample discerns between patenting and non-patenting firms, as well as R&D and non-R&D performing firms, it can initially be argued that the underlying competitive pressure of potential innovating firms is captured by a binary-dependent variable. Hence the dependent variable takes only two values representing whether the firms are observed as patent-active or not. The arguments for this methodology in testing the Schumpeterian assertions on market structure and innovation account for several intuitive shortcomings of the LS-regression approach. First, one way of testing the simple Schumpeterian hypothesis that large, well-established firms are more innovative than small entrepreneurial-like firms would be to divide the sample into small and large firms (see Acs & Audretsch [7]). By grouping innovating firms into categories according to the observed variable, these can be interchanged in a regression setting. For example, this model design allows for testing the impact of small firms' innovation on large firms by including the category of small firms as regressor. Unfortunately, this concept has a number of shortcomings, the most apparent being that this demands a rather large sample of innovative firms. Since this situation does not occur too often, we are forced to look for other methods; otherwise, the significance of estimates is likely to be weakened in relatively small samples by this straightforward procedure. An arbitrary division of firms into size categories may also overemphasize the magnitude of patenting activity in large firms. In small economies, we additionally face the obvious limitation that there are relatively few innovating firms. For the case of manufacturing firms in Denmark, further difficulties arise, as there are only a few large manufacturing firms.

The results indicate that we need to be cautious when we address the notion of firm size and market concentration. Although it is difficult to compare the results presented to previous evidence, which is based mainly on samples of very large firms, the results in this article point towards important implications of self-selection. Based on the two samples of patenting and R&D-active firms, two suggested selection variables provide evidence on selection bias in a sample consisting of 3,032 manufacturing firms in Denmark for which patenting and R&D activity can be observed for 354 and 359 firms. Consequently, results are not only sensitive to the econometric techniques we apply, but the methods applied to address the link from market structure to industrial innovation need to be carefully conceived and the results always interpreted on the basis of these. Hence, applying a standard regression technique only on truncated samples of innovative firms may provide biased estimates, as we should preferably attempt to assess the potential impact of non-innovating firms. As can be seen, the choice of selection variables can be independent of their impact on the propensity to patent when age of company and market share in both samples are of opposite effects. For the patent sample, both selection variables are significant, as they provide a significant correction variable in the OLS-model. Market share also provides a significant correction variable for the R&D sample that, in turn, provides a significant correction variable in the OLS-model. It is therefore suggested that selection bias is a potential source of bias in the study of industrial innovation. Further, it is proposed that it is important to control for selection bias, in particular for relatively small samples, as we intend to provide insight on how market structure influences innovation activity in a general model. Although we have only sparse knowledge on likely causes for selection, it should not deter our attention from these matters, as the results on the patenting and R&D-performing manufacturing firms in Denmark indicate that innovative firms can be distinguished precisely for being innovative. It remains to identify representative variables that we can rely on for correcting the selection bias, whether these are identified as single variables or as different functional forms. For now, these questions are beyond the present scope of this article. Finally, a crucial quality of the results concerns the reproducibility of the data. In other words, as detailed evidence on patenting activity, R&D efforts, and key business data continues to be compiled, we are in an advantageous position to refine our methods of investigation and apply new techniques. The ability to investigate the properties of a complete population of firms, for which we also can access highly representative information on sub-samples, presents us, in fact, with an entirely new research situation in the study of industrial innovation. This may eventually bring us in a situation where we are able to distinguish even better between technical properties of the included variables, the econometric technique, and the very nature of the phenomena we study. It is the hope of the author that this article will inspire fellow researchers to find it worthwhile to compile similar micro-economic data for other countries. This will allow us to study patenting and R&D activity by firm-level data in a cross-country setting.