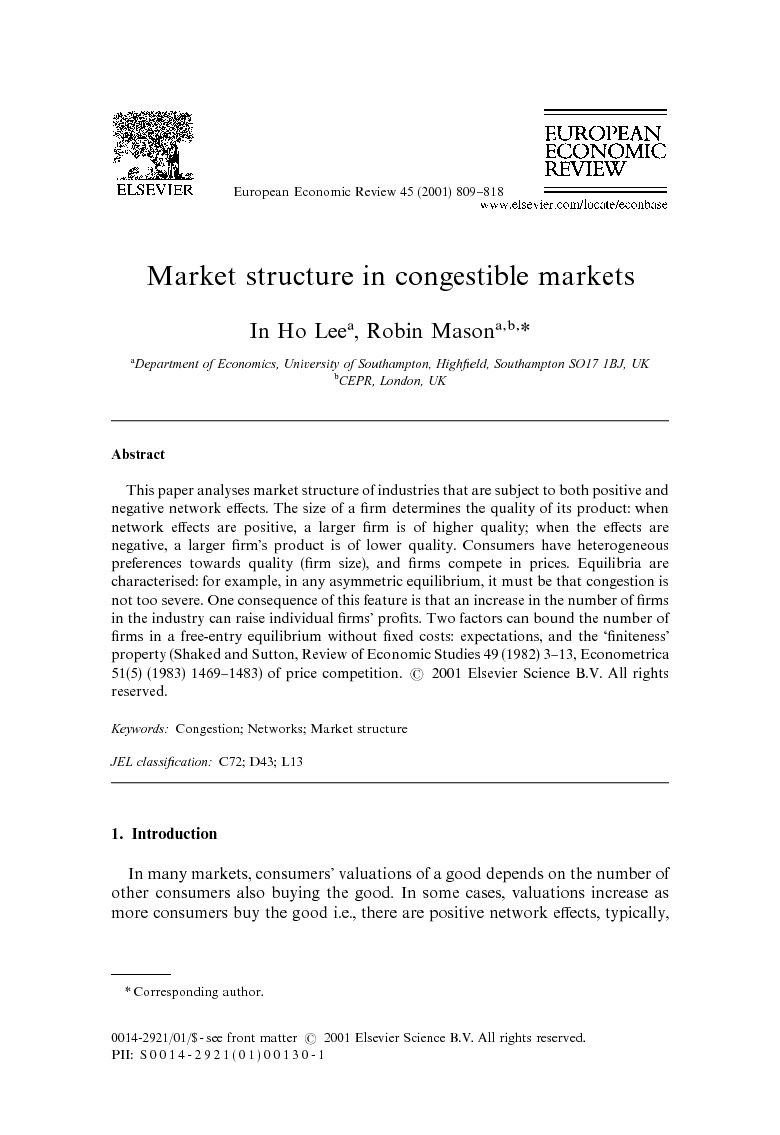 This paper analyses market structure of industries that are subject to both positive and negative network effects. The size of a firm determines the quality of its product: when network effects are positive, a larger firm is of higher quality; when the effects are negative, a larger firm's product is of lower quality. Consumers have heterogeneous preferences towards quality (firm size), and firms compete in prices. Equilibria are characterised: for example, in any asymmetric equilibrium, it must be that congestion is not too severe. One consequence of this feature is that an increase in the number of firms in the industry can raise individual firms’ profits. Two factors can bound the number of firms in a free-entry equilibrium without fixed costs: expectations, and the ‘finiteness’ property (Shaked and Sutton, Review of Economic Studies 49 (1982) 3–13, Econometrica 51(5) (1983) 1469–1483) of price competition.

In many markets, consumers’ valuations of a good depends on the number of other consumers also buying the good. In some cases, valuations increase as more consumers buy the good i.e., there are positive network effects, typically, when aggregate consumption of a firm's good is low. In other cases, valuations decrease as more consumers buy the good, e.g. because congestion occurs. This occurs in many markets of interest, and particularly communication and information-based industries. Each new web site, or the addition of information to an existing site, increases the value of the Internet to every existing user. However, as usage of the Internet grows, so does congestion: despite large increases in overall capacity, at least parts of the Internet (such as international lines and public peering points) are heavily loaded and experience consequent performance degradation. (See Odlyzko (1999) for a summary.) The two cases have been analysed extensively, but separately. In this paper, positive and negative network effects are combined. The paper departs further from most of the previous analysis of network effects, both positive and negative, by supposing that consumers have heterogeneous valuations of the network effects. Just as consumers may have different preferences towards quality as a physical attribute of a good (because they have different incomes, say), they may have different preferences towards quality as determined by network effects. People differ in the degree to which they gain utility from being able to send e-mails to a large number of people; and they differ in the degree to which they lose utility from having to wait while a page loads when the Web is congested. The effect of this is to combine vertical differentiation with network effects. When firms compete in prices, this has important implications for equilibrium market structure. Relatively few papers have examined market structure and network effects in a vertically differentiated environment. The early network papers, such as Katz and Shapiro (1985), allow for heterogeneous valuations for the basic good, but have homogeneous valuations of network effects. Bental and Spiegel (1995) extend Katz and Shapiro (1985) by allowing for heterogeneous preferences towards positive network effects, keeping the assumption of quantity competition. They compare market structures under a variety of competitive and technological conditions. This work differs from theirs in two respects. First, price, rather than quantity, competition is considered. This avoids the imposition of an exogenous minimum network size, which Bental and Spiegel require.1 It also means that expectations can be far more central to the analysis. Secondly, we consider both positive and negative network effects; this has a substantial effect on equilibrium outcomes. Section 2 lays out the model. Section 3 analyses the pricing stage; Section 4 considers the (prior) entry stage. Section 5 discusses the role of expectations in the analysis. Section 6 concludes. Due to space considerations, the proofs of propositions are omitted and are available from the authors on request.

Network effects are not always positive or always negative. In many cases – for example, communication networks such as the Internet – network effects are non-monotonic. This paper has shown that this can have important and surprising implications for market structure. It has also shown that equilibrium outcomes can depend critically on the form of expectations when there are heterogeneous preferences towards network effects and price competition between firms. Future work should investigate this dependence, and other extensions, further.