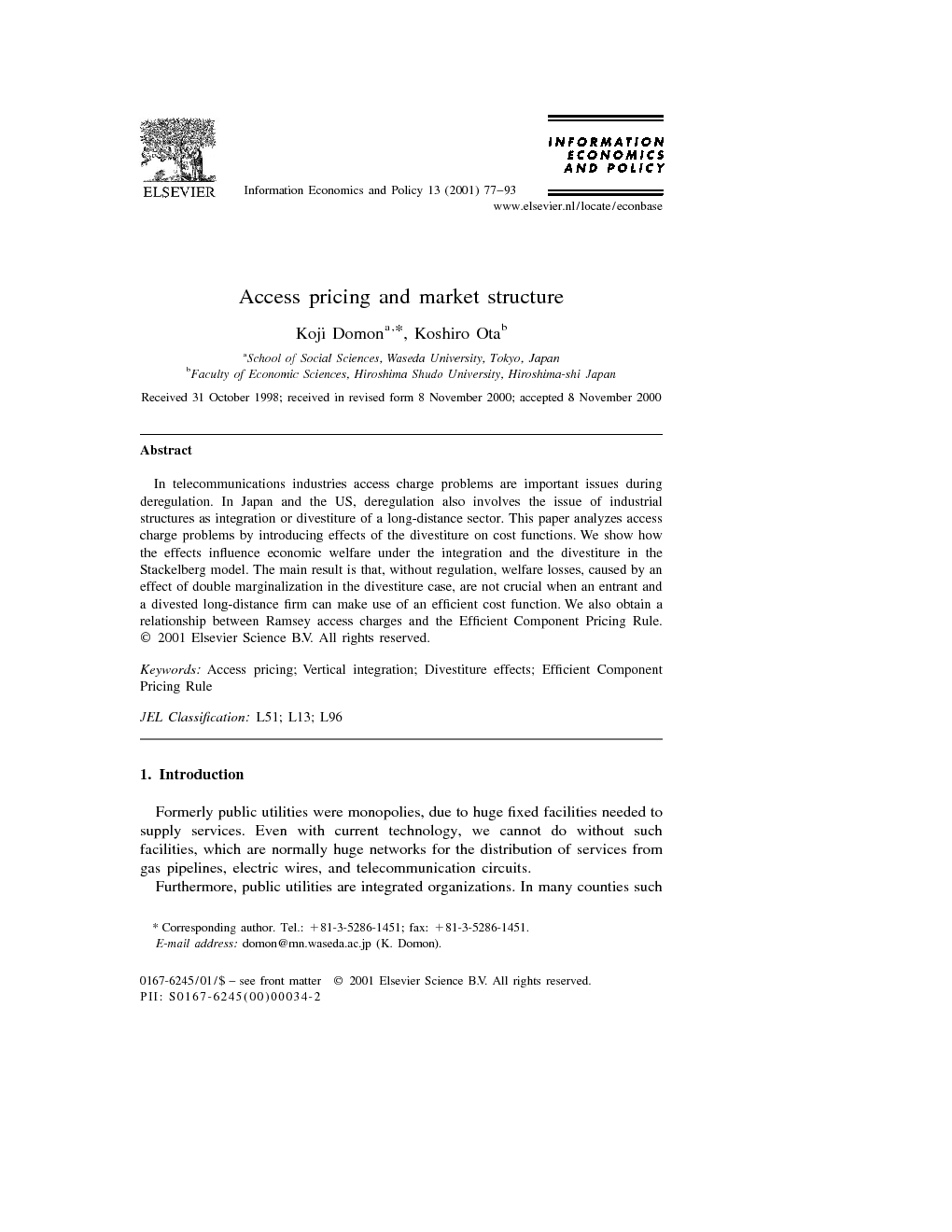 In telecommunications industries access charge problems are important issues during deregulation. In Japan and the US, deregulation also involves the issue of industrial structures as integration or divestiture of a long-distance sector. This paper analyzes access charge problems by introducing effects of the divestiture on cost functions. We show how the effects influence economic welfare under the integration and the divestiture in the Stackelberg model. The main result is that, without regulation, welfare losses, caused by an effect of double marginalization in the divestiture case, are not crucial when an entrant and a divested long-distance firm can make use of an efficient cost function. We also obtain a relationship between Ramsey access charges and the Efficient Component Pricing Rule.

Formerly public utilities were monopolies, due to huge fixed facilities needed to supply services. Even with current technology, we cannot do without such facilities, which are normally huge networks for the distribution of services from gas pipelines, electric wires, and telecommunication circuits. Furthermore, public utilities are integrated organizations. In many counties such public utilities have recently been deregulated since the basis for a natural monopoly has gradually disappeared due to technological advances, and the belief that competition is necessary for the social welfare. In such situations, upstream sectors with huge fixed facilities must be regulated, while downstream sectors do not need to be so. When the upstream sector supplies only distribution services and not the final services to consumers, the regulation problem resembles that of monopolies. In telecommunication industries, however, the upstream sector supplies services to both the downstream sector and the consumer. Such a situation complicates regulations because of access services and distorted competition. Regarding the access charge problem1, various authors have recently presented papers classified into three main categories: Ramsey pricing, the Efficient Component Pricing Rule (ECPR)2, and long-run incremental cost. For instance, Armstrong (1998) and Laffont et al. (1998) considered situations such as the UK market in which an incumbent (British Telecom), an entrant (Mercury), and CATV companies compete. In order to expand and cover service areas each company must interconnect to each other. They used the Hotelling model of product differentiation, and the characteristic of their models was consideration of a mature market in which firms equally compete with each other. These papers assumed situations causing interconnection, that is, a two-way access.3 However, there is another situation to be analyzed. Baumol and Sidak (1994), Armstrong et al. (1996), and Sidak and Spulber (1997) considered a one-way access and insisted on efficiency of the ECPR. One-way access takes place in the transit from monopolistic to competitive situations. Whenever a new entry occurred, the US telecommunications industry has seriously considered access charge problems of the one-way access. A similar situation arose in the Japanese telecommunications industry. In 1999, Japanese giant common carrier, Nippon Telegraph and Telephone (NTT), was divided into two local carriers and a long-distance carrier. The aim of such a divestiture was to create equal competitive conditions for long-distance common carriers. Since NTT’s long-distance sector had the advantage of integration in competition, to remove this advantage was significantly important for new entrants. In Fig. 1 we present a course from monopoly to competition. The US chose the lower course in the 1996 Telecommunication Act, and the UK did the same, but skipped the partial integration and the complete divestiture. Japan started deregulation from the partial integration and is now at the stage of complete divestiture.4 Full-size image (10 K) Fig. 1. Market structure in the transition from monopoly to competition. Figure options We need to note here that no researcher has theoretically considered divestiture and integration effects of quasi-public utilities such as telecommunication industries. These effects are associated with network access. In this paper we consider a key factor, an effect of the divestiture on cost functions. Our analysis proceeds as follows: In Section 2, we set up a basic model and explain the effect of divestiture on cost functions. In Section 3, we consider situations with no regulation and compare welfare under two market structures: the partial integration and the divestiture cases. In Section 4, we obtain Ramsey prices, make it clear how the Ramsey access charge is related to ECPR. In final section, we summarize our considerations.

In this paper we presented two clear conclusions regarding divestiture effects of cost functions and difference in Ramsey access charges between two market structures. The first conclusion, concretely explained in the linear model, suggests that the positive divestiture effect is not a sufficient but a necessary condition. A relatively large positive effect is needed to improve the social welfare in the divestiture case. The second conclusion is that we must modify the efficient component-pricing rule in the partial integration case and cannot use it in the divestiture case. We obtained new formulas for each case. Market structures are drastically changing in the information industries. What determines them is impossible to explain. However, we must take into account proper regulations, especially in telecommunications industries of many countries which have various regulations regarding market structures. The considerations in this paper can be applied analyzing various situations.