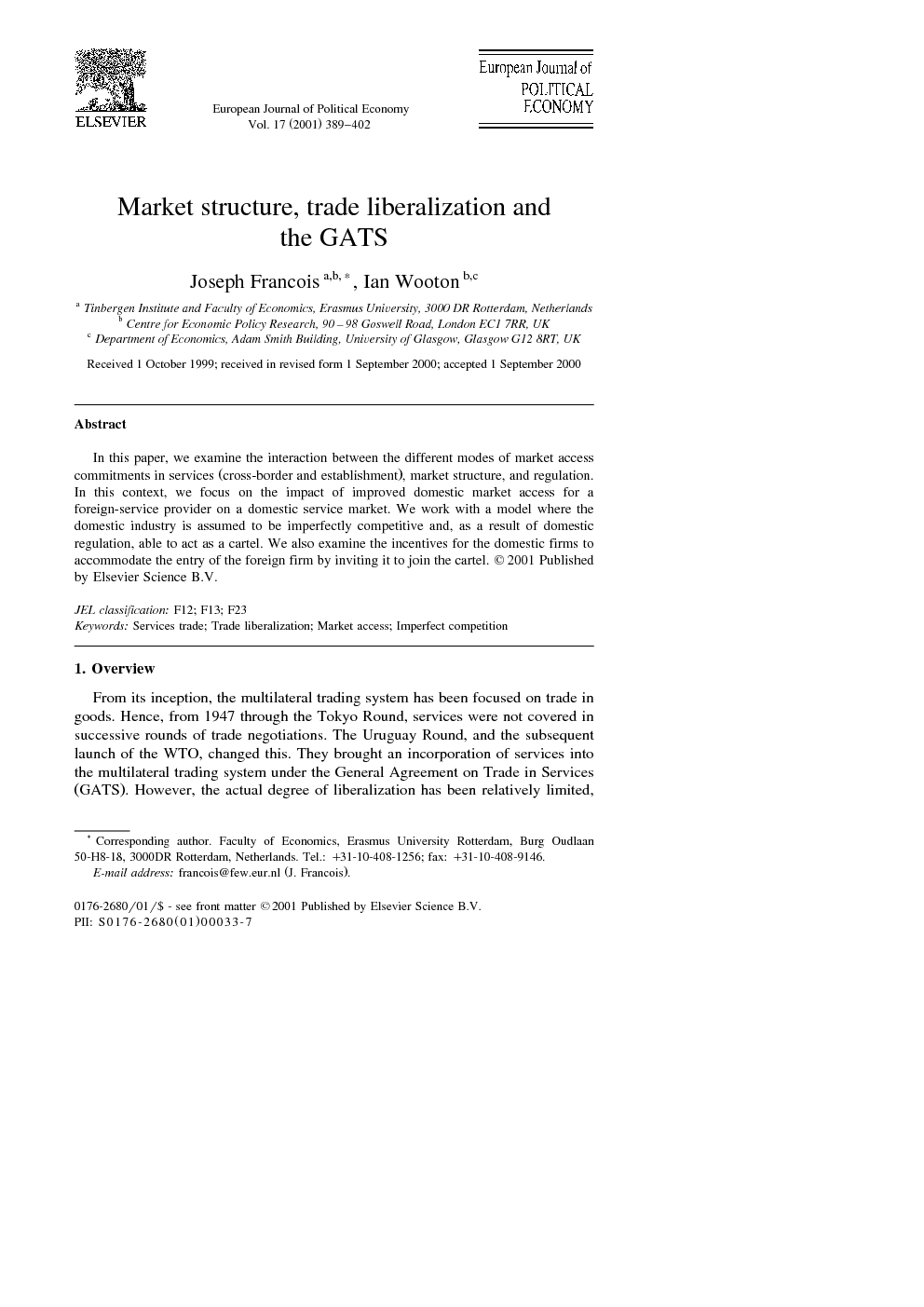 In this paper, we examine the interaction between the different modes of market access commitments in services (cross-border and establishment), market structure, and regulation. In this context, we focus on the impact of improved domestic market access for a foreign-service provider on a domestic service market. We work with a model where the domestic industry is assumed to be imperfectly competitive and, as a result of domestic regulation, able to act as a cartel. We also examine the incentives for the domestic firms to accommodate the entry of the foreign firm by inviting it to join the cartel.

From its inception, the multilateral trading system has been focused on trade in goods. Hence, from 1947 through the Tokyo Round, services were not covered in successive rounds of trade negotiations. The Uruguay Round, and the subsequent launch of the WTO, changed this. They brought an incorporation of services into the multilateral trading system under the General Agreement on Trade in Services (GATS). However, the actual degree of liberalization has been relatively limited, with many of the GATS schedules involving simple stand still commitments (or less). It is generally recognized that there still remains significant scope for liberalization in the service sectors. This paper is concerned with the analytical implications of service-sector liberalization, and in particular the role of market structure. The trade theory literature has traditionally focused on trade in goods, with the literature on international trade in services being a relatively limited and recent addition. (See, for example, Francois, 1990a, Francois and Schuknecht, 1999, Hoekman, 1994, Markusen, 1988, Markusen, 1989, Sampson and Snape, 1985, Stern and Hoekman, 1988 and Deardorff, 1985). In addition, while there is a sizable empirical literature on service sector policy and deregulation, this is largely focused on domestic deregulation.1 In contrast, we focus here explicitly on cross-border trade in services, and the interaction of international trade with market structure and public regulation.2 Of course, in many ways, the insights from the theoretical literature on international trade apply equally to goods and services. This is particularly true for cross-border trade. There are, however, some important differences. One is the role of proximity (see Francois, 1990b and Sampson and Snape, 1985), which has important analytical implications. The significance of proximity for service transactions means that “trade” in the case of services often requires a mix of cross-border transactions and local establishment (i.e., FDI). The importance of trade through affiliates is illustrated, for the case of the US, in Table 1. The US is the leading service exporter, with US$245.7 billion in 1998. The level of US service sales through affiliates (establishment trade) is comparable. Establishment sales amounted to US$258 billion in 1997, which compares to US$240 billion in direct exports. Table 1. US cross-border and affiliate trade in services Source: Bureau of Economic Analysis, 1999. Year US cross-border exports US cross-border imports US foreign sales through affiliates Foreign sales in US through affiliates Billions of dollars 1987 86.0 73.9 72.3 62.6 1988 100.1 81.0 83.8 73.2 1989 117.1 85.3 99.2 94.2 1990 136.2 98.2 121.3 109.2 1991 151.2 99.9 131.6 119.5 1992 162.3 100.4 140.6 128.0 1993 170.6 107.9 142.6 134.7 1994 186.0 119.1 159.1 145.4 1995 202.2 128.2 190.1 149.7 1996 221.1 137.1 223.2 168.4 1997 240.4 152.4 258.3 205.0 1998 245.7 165.3 Table options The empirical and operational importance of establishment leads to a second important difference between goods and services. This is an institutional difference. While the GATT emphasizes barriers at the border (tariffs, quotas, etc.), the GATS has a different focus. From the outset, it has emphasized both cross-border barriers and barriers to local establishment. Consequently, the GATS blurs trade and investment restrictions, and covers both trade and investment rules to the extent that they limit market access in service sectors. Given the structure of the GATS, negotiations involve parallel commitments on cross-border trade and local establishment by foreign service providers. We argue in this paper that these two modes (a simplification of the four modes actually listed in the GATS) can carry different implications for national welfare, market structure, profits, and related metrics tied to trade liberalization. In particular, given imperfect competition in services (often in conjunction with domestic regulation), realization of gains from trade liberalization is tied closely to issues of market regulation and market structure.3 This, in turn, means that assessment of services commitments should take into account market structure and regulatory issues that affect the degree of competition. The remainder of the paper is organized as follows. In Section 2, we provide some background and motivation. In Section 3, we develop a stylized model of trade in services, involving alternatively establishment or cross-border trade. In Section 4, we then examine liberalization of trade and establishment restrictions. Finally, our results are summarized in Section 5.

The GATS places emphasis on two broad modes of trade: cross-border (i.e., international) trade, and trade through local establishments. Cross-border trade includes movement of service providers, movement of consumers, and cross-border sales. Hence, in contrast to trade in goods, GATS-based negotiations take place on the dual margins of trade and investment concessions. Our approach in this paper has been to work with a formal model of oligopoly to examine the effects of market-access concessions on domestic and foreign firms and on domestic consumers. We have argued that the relative benefits of cross-border and establishment-related market-access concessions hinge critically on underlying issues of regulation and market structure. In particular, the interests of the domestic and foreign industry will depend, in part, on the impact that trade has made on the market power of domestic firms. We summarize our analytical results in three groupings: rather obvious, somewhat less obvious, and even less obvious. The last set of results constitutes the substantive contribution of the paper. On the rather obvious front, given an imperfectly competitive industry (whether Cournot competition or perfect collusion), less market access (i.e., greater restrictions) results in the foreign service provider having a smaller market share and profits; domestic service providers becoming increasingly profitable, and a higher home-market price. Our less obvious results arise from our consideration of the effects of less competition within a regulatory environment that tolerates collusion among a small number of domestic firms. We showed that the foreign firm will have higher profits the less competitive the domestic industry, profits of the home industry are not monotonic in the number of home firms, and initial moves away from monopoly can actually boost the market share and profits of the entire domestic industry. Even less obvious (and the main lesson to carry away from our analysis) is the incentive for bringing a foreign firm into a domestic cartel. This involves establishment, and yields the following three results. When the trade costs are high, a domestic cartel wants to keep the foreign firm out (i.e., it opposes establishment), while the foreign firm would like to have the right of establishment, even as part of the cartel. At more moderate trade costs, both the home and foreign firms favor bringing the foreign firm into the domestic cartel. At low trade costs, the foreign firm would rather compete with the home cartel than be a part of it. Collectively, this last set of results points to linkages between the degree of competition, the mode and degree of market access, and the pro-competitive effects of liberalization. When we introduce establishment in conjunction with low cross-border barriers, we find that the foreign-service provider takes on the domestic cartel. This is clearly a pro-competitive result. At higher levels of cross-border trade barriers, establishment may instead lead to an equilibrium where the foreign sector is simply co-opted into the domestic cartel. This has well known negative consequences related to profit shifting. The impact of establishment on the degree of competition, and on potential gains or losses from liberalization, hinges on the underlying degree of competition (a regulatory issue), but also on barriers to cross-border trade.