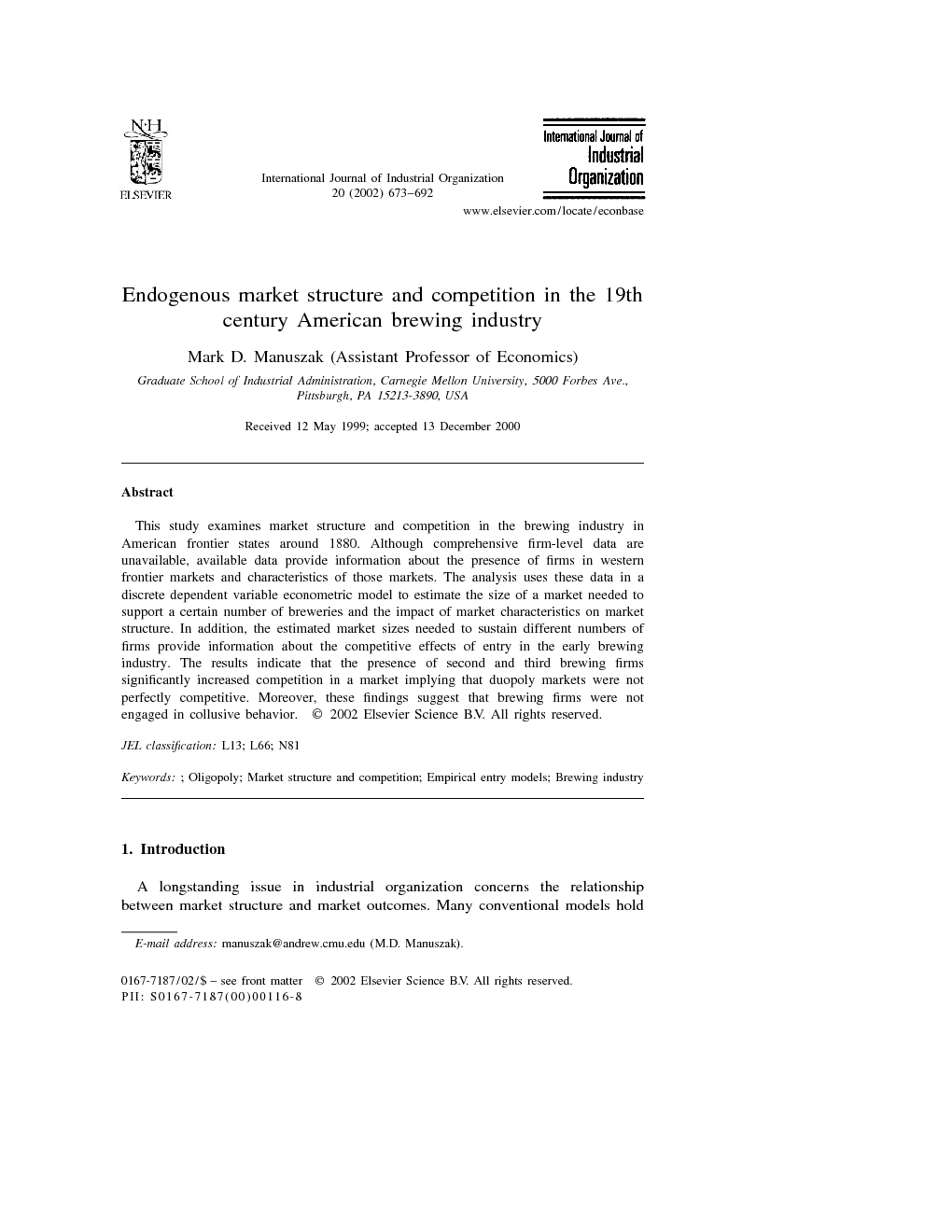 This study examines market structure and competition in the brewing industry in American frontier states around 1880. Although comprehensive firm-level data are unavailable, available data provide information about the presence of firms in western frontier markets and characteristics of those markets. The analysis uses these data in a discrete dependent variable econometric model to estimate the size of a market needed to support a certain number of breweries and the impact of market characteristics on market structure. In addition, the estimated market sizes needed to sustain different numbers of firms provide information about the competitive effects of entry in the early brewing industry. The results indicate that the presence of second and third brewing firms significantly increased competition in a market implying that duopoly markets were not perfectly competitive. Moreover, these findings suggest that brewing firms were not engaged in collusive behavior.

This paper provides insight into some of the market conditions facing brewing firms in the late 1800s. The analysis uses data on the presence of breweries in western frontier markets and characteristics of those markets in a discrete dependent variable model to analyze the factors influencing market structure. The brewing industry at that time serves as an ideal application of such an approach since the existence of high transportation costs permits reasonable identification of local markets. The results suggest that the demographic composition of a market had a definite impact on entry as brewing was more profitable in markets which were more heavily German and male. Moreover, market growth likely had an important effect on the entry decisions of potential brewers. It was also found that a market of relatively small size, although perhaps not by frontier standards, was able to support entry of one firm while substantially larger towns were required for more firms to enter. More interestingly, this study provides evidence about the competitive effects of entry in oligopoly markets while taking into account the endogeneity of market structure and the inability to observe many economic variables. In the case of the brewing industry around 1880, this paper argues that entry of a second firm did lead to more strenuous competition as a market needed to more than double in size to support a duopoly rather than a monopoly. Similarly, markets became more competitive with the entry of third firms as triopoly market size had to increase disproportionately relative to duopoly market size. These results imply that brewing firms were not colluding as competition intensified with the entry of additional firms. However, having two firms in a market was not sufficient for perfect competition. Extension of the techniques which this paper employs could also serve to expand knowledge about the evolution of industries such as the brewing industry. In particular, an explicitly dynamic model along with panel data on the entry and exit decisions of firms, such as American Breweries, could provide additional insight into the technological, demand and competitive effects which influence entry and market structure. Horvath et al. (1999) study of the brewing industry provides a preliminary step in this direction. However, their theory about entry and exit patterns in the brewing industry, namely information accumulation leading to excessive entry which is then followed by mass exit, is only one possible explanation for events in this type of industry. More complete models could test such an explanation against those related to, for example, demand or cost factors. Such extensions could provide valuable insight into the underlying causes of market structure and the impact of structure on the performance of markets.