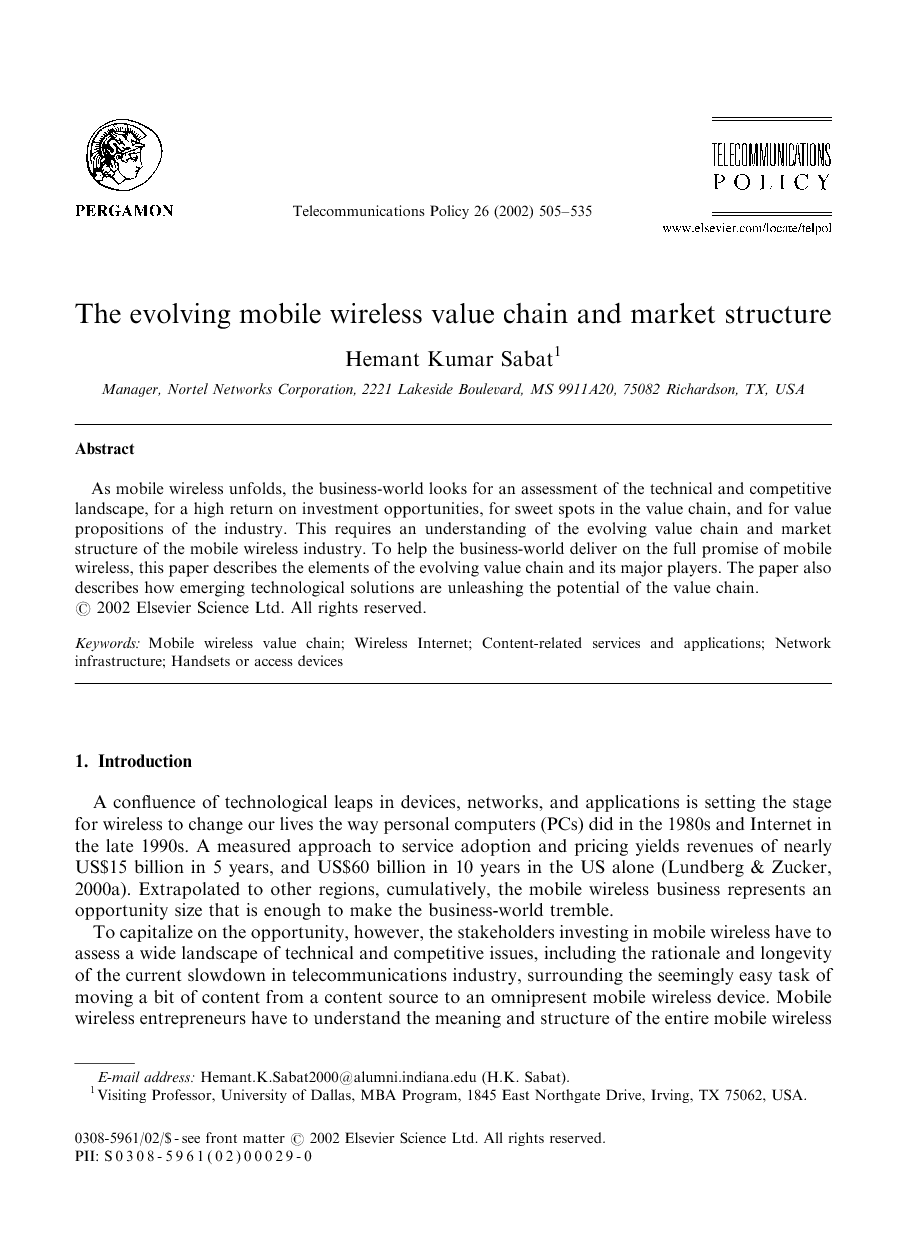 As mobile wireless unfolds, the business-world looks for an assessment of the technical and competitive landscape, for a high return on investment opportunities, for sweet spots in the value chain, and for value propositions of the industry. This requires an understanding of the evolving value chain and market structure of the mobile wireless industry. To help the business-world deliver on the full promise of mobile wireless, this paper describes the elements of the evolving value chain and its major players. The paper also describes how emerging technological solutions are unleashing the potential of the value chain.

A confluence of technological leaps in devices, networks, and applications is setting the stage for wireless to change our lives the way personal computers (PCs) did in the 1980s and Internet in the late 1990s. A measured approach to service adoption and pricing yields revenues of nearly US$15 billion in 5 years, and US$60 billion in 10 years in the US alone (Lundberg & Zucker, 2000a). Extrapolated to other regions, cumulatively, the mobile wireless business represents an opportunity size that is enough to make the business-world tremble. To capitalize on the opportunity, however, the stakeholders investing in mobile wireless have to assess a wide landscape of technical and competitive issues, including the rationale and longevity of the current slowdown in telecommunications industry, surrounding the seemingly easy task of moving a bit of content from a content source to an omnipresent mobile wireless device. Mobile wireless entrepreneurs have to understand the meaning and structure of the entire mobile wireless value chain in order to identify potential sweet spots such as the one Palm spotted in 1996—Personal Information Manager (PIM), or Personal Digital Assistant (PDA)—and establish companies. To identify opportunities for investment, investors have to understand the sources of high returns in the mobile wireless value chain. Further, customers’ perception of mobile wireless value decides the success of the offering of telecommunications industry. The subscriber must understand the value proposition of the mobile wireless services available for subscription. This requires modeling the mobile wireless value propositions. The simplest building block to use is the wireline voice and data traffic model. Mobile wireless data could follow or surpass wireline data traffic trends. According to AT&T Labs Research (2000), Coffman and Odlyzko (2001), and Qualcomm (2001), wireline data traffic increased due to increasing usability enabled at an acceptable service cost. As the subscriber expects the same value from data content along with certain specific additional benefits from mobile wireless in order to switch, the key driver of mobile wireless data will also be the price paid for volume of data download (usage) at an acceptable download rate. Both wireless and wireline content being the same, i.e., voice and data, for a subscriber to adopt wireless services in place of wireline services, the mobile wireless value offer should be equal to wireline world's value-plus-extra. Otherwise, it will defy economic logic for a subscriber to switch to the wireless world considering the premium paid for mobile wireless services over wireline services. Current wireline services are cheaper than their counterparts. Drawing from AT&T Labs Research (2000) and Qualcomm (2001) research studies on wireline Internet and from International Mobile Telecommunications (IMT)-2000,2 and analyzing price elasticity drivers in wireline and wireless worlds to understand expectations of subscribers, the value propositions of mobile wireless are: convenient, secure, reliable, personalized service all at a value-based price (Sabat, 2002a). To deliver this value, traditionally, the network operator managed and owned the entire value chain. With the players in the segments of the value chain and the complexity of interactions among them increasing, market turning competitive and hostile, and surging customer expectations, the value chain is evolving into a set of partnerships to deliver mobile wireless value. In the new regime, then, the wireless network operator no longer owns the entire value chain. Whereas the literature offers many treatise on a few of the aspects of emerging packet networks in a disjointed fashion, the evolution of the mobile wireless value chain and market structure has outpaced the research. In this backdrop, to help the business-world deliver on the full promise of mobile wireless value this paper provides an integrative view of the evolving packet-based mobile wireless value chain, and of the market players that have organized themselves to offer the mobile content—both voice and data as one, but differentiated content. Whereas the segments of the value chain have been fluid and could well be grouped in many ways in response to the dynamic landscape, this paper, based on an analysis of the players in the industry, attempts to flesh out exactly • What the various segments of the value chain have been and what they are going to be • What these segments have been doing and what the new segments will do in the evolved state • Who the players have been in the market and who the new players are • What the existing offerings are, what the new applications and services are and how these fit into the proposed value chain, and • How the companies have been striving together to deliver seamless mobile wireless services to their subscribers, generate revenues and create high-value sustainable organizations. To correlate the value chain with the emerging industrial mobile wireless solutions and benchmark the performance of these solutions, this paper proposes a four-dimensional matrix with user interface, content synchronization mode, content transmission rates, and geographical coverage as its dimensions. These dimensions were arrived at by understanding the fundamental business drivers of mobile wireless (Sabat, 2002a). Equipped with this understanding of the value chain and its elements, all players in the mobile wireless arena can explore new revenue-generating opportunities to increase their market share. By benchmarking the existing value chain against the normative model described in this paper, and by analyzing their portfolios’ strengths and competencies, the players can identify sweet spots and adopt newer business models to harness the potential for new revenues or market share.