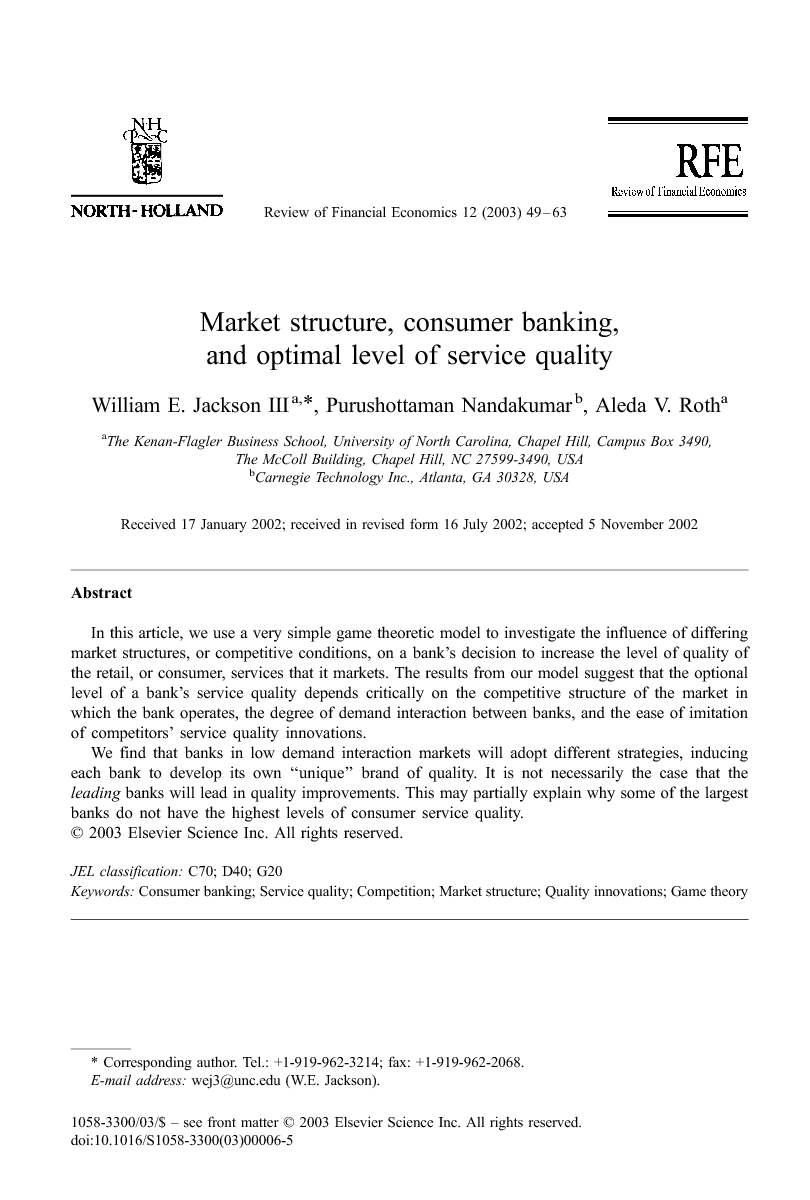 In this article, we use a very simple game theoretic model to investigate the influence of differing market structures, or competitive conditions, on a bank's decision to increase the level of quality of the retail, or consumer, services that it markets. The results from our model suggest that the optional level of a bank's service quality depends critically on the competitive structure of the market in which the bank operates, the degree of demand interaction between banks, and the ease of imitation of competitors' service quality innovations. We find that banks in low demand interaction markets will adopt different strategies, inducing each bank to develop its own “unique” brand of quality. It is not necessarily the case that the leading banks will lead in quality improvements. This may partially explain why some of the largest banks do not have the highest levels of consumer service quality.

In this article, we use a very simple game theoretic model to investigate the influence of differing market structures, or competitive conditions, on the bank's decision to increase the level of quality of the retail, or consumer, services it offers. We view an increase in the level of consumer service quality as an “innovation” in the service or a new service offering. Viewing increases in the level of consumer service quality as service innovations allows us to link our analysis to the large and powerful economic literature on the bank's decision to innovate. Specifically, our analysis draws heavily from the extant literature on market structures' influence on product innovation. Additionally, we focus on consumer service quality in recognition of the fundamental differences in delivery strategies employed by banks in difference financial markets. For example, a “rationing” model of service delivery typically characterizes consumer financial service markets, while a “pricing” model of service delivery is usually used to provide commercial and industrial financial services. The game theory model we develop in this article is a better fit for the rationing model of consumer financial service delivery. We consider the use of a game theoretic approach quite timely for our analysis, considering the recent attention game theory has received. For example, in 1994, the Nobel Prize in Economics Science was won by three game theorists. In his Nobel lecture, Harsanyi (1995) spoke about what game theory is and why it is important. He said: Game theory is a theory of strategic interaction. That is to say, it is a theory of rational behavior in social situations in which each player has to choose his moves on the basis of what he thinks the other players' countermoves are likely to be. In principle, every social situation involves strategic interaction among the participants. Thus, one might argue that proper understanding of any social situation would require game-theoretic analysis…. …game theory has now definitely become an important analytical tool in understanding the operation of our economic system. The Nobel Prize and these remarks highlight the significant contribution game theory has made to the economics profession in general and the subfield of industrial organization in particular (e.g., Tirole, 1990). However, game theory has had an even broader impact. The vast majority of recent management theory has been greatly informed by game theory (e.g., Chase & Prentice, 1987 and Oster, 1990). Additionally, from a more practical perspective, many major banks are making use of game theory in their strategic operations (e.g., Barnett, 1995). Thus, we believe it quite appropriate to develop strategic decisions about consumer service quality provided by banks within a game theoretic model. Our results from that model suggest that the optional level of a banks' service quality depends critically on the competitive structure of the market in which it operates, the degree of demand interaction between banks, and the ease of imitation of competitors' service quality innovations. The remainder of our paper is organized as follows. Section 2 presents some background and specific linkages to the market structure and product innovations literature. Section 3 presents our model and results. Lastly, Section 4 offers a brief conclusion.

This paper raises issues concerning the relatedness of service quality to market performance and market structure. In particular, we addressed questions related to how market structure impacts the optimal level of consumer service quality. We also consider the impact of existing service quality levels on the decision of potential market entrants to actually enter the market. To address these questions, we structure our investigation based on the major findings from a recent empirical study by Roth and Jackson (1995) that relates service quality to market performance. Roth and Jackson, focussing on the banking industry, found that (1) generic operations capabilities affect service quality and performance, although not all relationships are direct; (2) service quality know-how and innovations can be directly observed and imitated; (3) the effects of technological leadership and market acuity on service quality are moderated by the absorptive capacity of employees to recognize and exploit their potential; hence, investments in people are critical to success; (4) market conduct influences the generic capabilities of the bank more than market performance, ceteris paribus; and (5) total factor productivity and service quality are negatively correlated. In this article, we described several different market structures analytically in order to provide specific insights about their relationship to consumer financial services quality levels. As might be anticipated, in a monopoly situation, a higher degree of imitation led to higher levels of quality in each period. In early periods, higher quality results from anticipation of future benefits of investments in quality improvements. Likewise, the higher quality levels chosen earlier make it more attractive for the bank to pursue larger quality improvements in later periods. In our duopoly analysis, we observe that higher degrees of imitation may actually lead to lower levels of quality being adopted. Consistent with the study of Reinganum (1982), this happens in markets with high demand interaction, where imitation by a competitor may imply reduced revenues for the bank that introduces the innovation. The average level of quality for all players will typically be lower than in a monopoly, again as a direct result of imitation leading to lower revenues. The case where demand interaction is low leads to some interesting insights. Banks in low demand interaction markets will adopt different strategies, inducing each service bank to develop their own “unique” brand of quality. It is not necessarily the case that the leading banks will lead in quality improvements. This may partially explain why some of the largest banks do not produce the highest levels of service quality. With high demand interaction, on the other hand, there should be more clustering of banks on the service quality dimension. However, we expect the average level of quality to be somewhat lower. With a threat of entry, imitation has the effect of lowering quality levels on average. Given a critical cost of entry, when the cost of entry is below this critical cost, the market will be a duopoly; otherwise, it will remain a monopoly. In this scenario, intuition suggests that as the degree of imitation increases the barrier to entry would be lowered (i.e., the critical cost of entry raised). However, such results are not so straightforward. The results are dependent upon the degree of demand interaction. If the demand interaction factor is high, and the prospect of imitation is high, the critical cost of entry is lowered, thus making entry less likely. Notably, high imitation does not necessarily imply more players. Furthermore, it appears that with higher demand interaction, imitation actually leads to fewer players. At the other extreme, when demand interaction is low, imitation appears to favor a larger number of banks in the market. In summary, we use a very simple game theoretic model to investigate the influence of differing market structures, or competitive conditions, on the bank's decision to increase the level of quality of the consumer services it offers. We find that market structure has a pronounced influence on the service quality innovation decision. However, the level of potential imitation and demand interaction in the market moderates the direction and intensity of that influence.