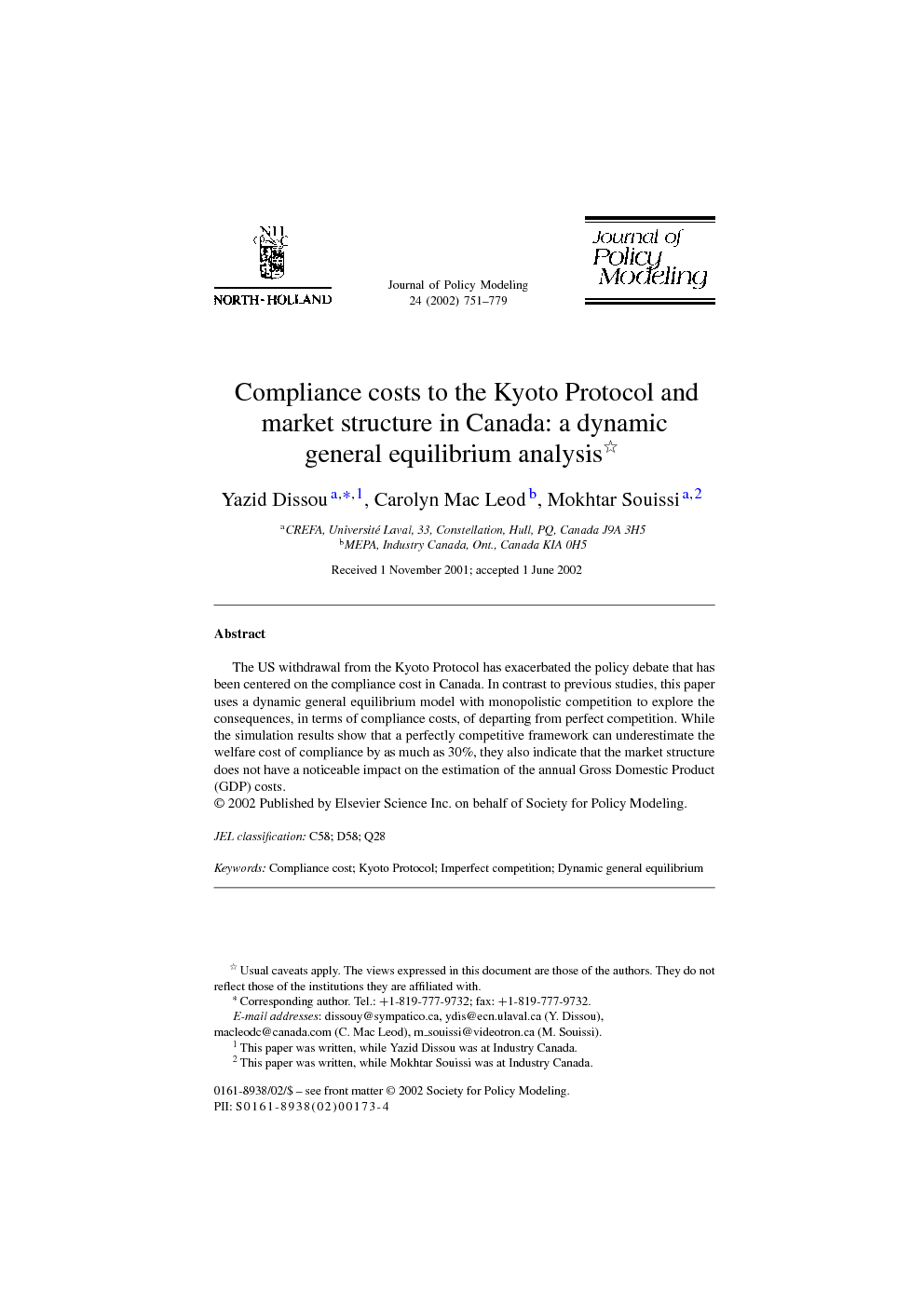 The US withdrawal from the Kyoto Protocol has exacerbated the policy debate that has been centered on the compliance cost in Canada. In contrast to previous studies, this paper uses a dynamic general equilibrium model with monopolistic competition to explore the consequences, in terms of compliance costs, of departing from perfect competition. While the simulation results show that a perfectly competitive framework can underestimate the welfare cost of compliance by as much as 30%, they also indicate that the market structure does not have a noticeable impact on the estimation of the annual Gross Domestic Product (GDP) costs.

This paper explores the role that departure from perfect competition may play in the analysis the welfare and growth implications of Canada’s compliance to the Kyoto Protocol. In December 1997, Canada agreed along with other 37 countries to take the most appropriate cost-effective measures to reduce its carbon dioxide equivalent emissions of GHG between 2008–2012 by 6% below 1990 levels. Much of the policy debate on the ratification of the protocol in Canada has centered on the aggregate cost, and mainly on the Gross Domestic Product (GDP) cost, that this country would incur should it adopt GHG mitigation policies in line with the accord. Most of the recent estimates of this cost range from less than 1–2% in terms of annual GDP loss relative to Business as Usual (BAU), depending on the policy instruments used.3 Strong pressure by environmentalist groups on the Canadian government to ratify the protocol is facing resistance by industrialists who argue that raising energy cost would impede the competitiveness of Canadian firms and would have negative impacts on output, employment and investment. The concerns raised by these opponents have been exacerbated by the US decision not to ratify the Kyoto Protocol, given the close trade link between the two countries. Still, because the price of international permits will presumably decrease, due to the US withdrawal from the Kyoto process, recent study by Eyckmans and Tilkens (2001), among others, have concluded that the cost of GHG mitigation policies will fall in the countries that remain in the process. However, opponents to the protocol still argue that Canada should not ratify the protocol because existing figures on the cost of implementing Kyoto are underestimated due to several reasons among which the two following related to the modeling framework. First, the fall of price of international permits due to the US withdrawal from the Kyoto process is not warranted, as the above-mentioned studies did not take into account the strategic behavior on the supply side of permit market by Former Soviet Union countries (FSU), i.e., Russia and Ukraine. Second, all existing studies on the costs of compliance to Kyoto Protocol in Canada assumed that firms behave competitively in their product markets. Answers to the first criticism related to the price international permits could be found in recent studies carried out by Manne and Richels (2001) and Böhringer (2001). Using multi-country models, these authors have concluded that the most likely strategic market behaviors of FSU will modify the expected change in the international price of permits from the US withdrawal from the Kyoto process. Consequently, Canada should not expect a lower international permit price, as a result of the US withdrawal from the Kyoto process. In contrast, and as far as we know, no study has addressed the second and most important criticism made by Kyoto opponents in relation the product market structure, which is an empirical matter. Several studies such as, Carraro and Galeotti (1996) and Rotemberg and Woodford (1996), have shown that considering an imperfect market structure in the analysis of the impact of increases in energy price could be very important. For example, in their study of the impact of an energy price increase in the United States, have found that the impact (loss) on GDP is much higher in the presence of market imperfections in the product market than with an assumption of perfect competition. Since in the presence of imperfect competition, the social marginal benefit of production is greater than its social marginal cost, the welfare impact of an output reduction caused by an energy price increase will be more deleterious than in a perfectly competitive framework. Moreover, a growing body of literature emphasizes the relevance of imperfect competition, not only in the analysis of sectoral price reforms with general equilibrium models, but also in the analysis of macroeconomic policies with aggregate models.4 The objective of this paper is to assess the underestimation of the welfare and GDP losses, if any, of assuming perfect competition in product markets. We develop a forward-looking, dynamic general equilibrium model with imperfect competition to study the welfare, sectoral and aggregate effects of Canada’s compliance to the protocol. In particular, we introduce a Chamberlinian competition framework in the analysis in order to capture firms’ departure from marginal cost pricing. We analyze both the long-term as well as the transition effects of implementing the protocol in Canada. To our knowledge, this is the first forward-looking dynamic general equilibrium model using an imperfectly competitive market structure in the product market in the analysis of the Kyoto Protocol, not only with respect to Canada, but also to any other country in the world. All of the general equilibrium models developed to appraise the economic impact of the protocol in Canada like, Bernstein, Montgomery, and Rutherford (1999), Mckibbin and Wilcoxen (1999)Wigle, 2001 and Wigle, 2002, among others, have adopted a perfect competition framework.5 Our model builds upon recent contributions in the literature in regards to dynamic general equilibrium models with imperfect competition, like Ambler, Cardia, and Farazli (1999), Gali (1994), Mercenier and Yeldan (1997) and Rotemberg and Woodford (1996), among others. However, one of the distinctive characteristics of the present model from the aforementioned models is the introduction of capital adjustment costs, which competitive, as well as non-competitive, firms must incur. The remainder of the paper proceeds as follows. We provide an intuitive description of the model in section two and discuss about the data, the calibration procedures and the numerical solution strategy in section three. Our interpretations of the simulation results are presented in the fourth section. Some concluding remarks follow in the last section. The complete listing of the model’s equations is presented in a separate annex, which is available from the authors.

This paper has explored the role that imperfect competition may play in the estimation of the compliance cost to the Kyoto Protocol in Canada. The policy debate on the ratification of the protocol in Canada, which has been centered on the aggregate cost, has recently been exacerbated by the recent withdrawal of the USA from the protocol. Most of the existing studies on the compliance cost have found a relatively low compliance cost to the protocol in Canada. Opponents to ratification of the protocol still legitimately raise doubts on these estimates, arguing that these costs are underestimated since the studies did not consider the role that a non-competitive market structure may play in amplifying the negative impacts of distortions introduced by the new carbon-constrained policies. This paper is a contribution to the analysis as, in contrast to all previous studies, it analyzed the compliance cost to the protocol in Canada using an imperfectly competitive framework. We developed a multi-sector and forward-looking dynamic general equilibrium model with imperfect competition to estimate the impact on output, investment, consumption, prices, GDP, and welfare in Canada. We modeled product markets as characterized by monopolistic competition and ran simulations in relation to compliance to the protocol using a national auctioned tradable permits scheme as the economic instrument to achieve Canada’s emission target in the appropriate years. As expected, the energy-producing sectors and the energy-intensive sectors suffer the most from the restriction on carbon dioxide emissions, while other sectors benefit from the change in the composition of demand. Assuming an imperfectly competitive market structure, the measure of welfare change of compliance to the protocol (over households’ lifetime period) is evaluated at −0.27%, when using reasonable values for market power of monopolistic firms. In the long run, the change in GDP relative to the BAU is evaluated at −1.48%. While our simulation results highlight the desirability to incorporate an imperfectly competitive market structure in the estimation of the welfare cost of the reform, they also indicate that the market structure does not have a noticeable impact on the estimation of the annual GDP cost of compliance to the agreement. Indeed, the underestimation of the welfare costs, by assuming a perfectly competitive market structure may be as high as 30%, while the long run GDP cost is almost the same as in a non-competitive framework (−1.47%). Finally, it is worth mentioning that the costs presented in this study should be considered as an upper limit to the true costs of compliance to the protocol for at least one reason. The paper has only considered a national implementation of the protocol, while an international co-ordination among Annex-B-1 countries in the market for tradable permits may contribute to reducing the penalty associated with the use of fossil fuels by Canadian economic agent.