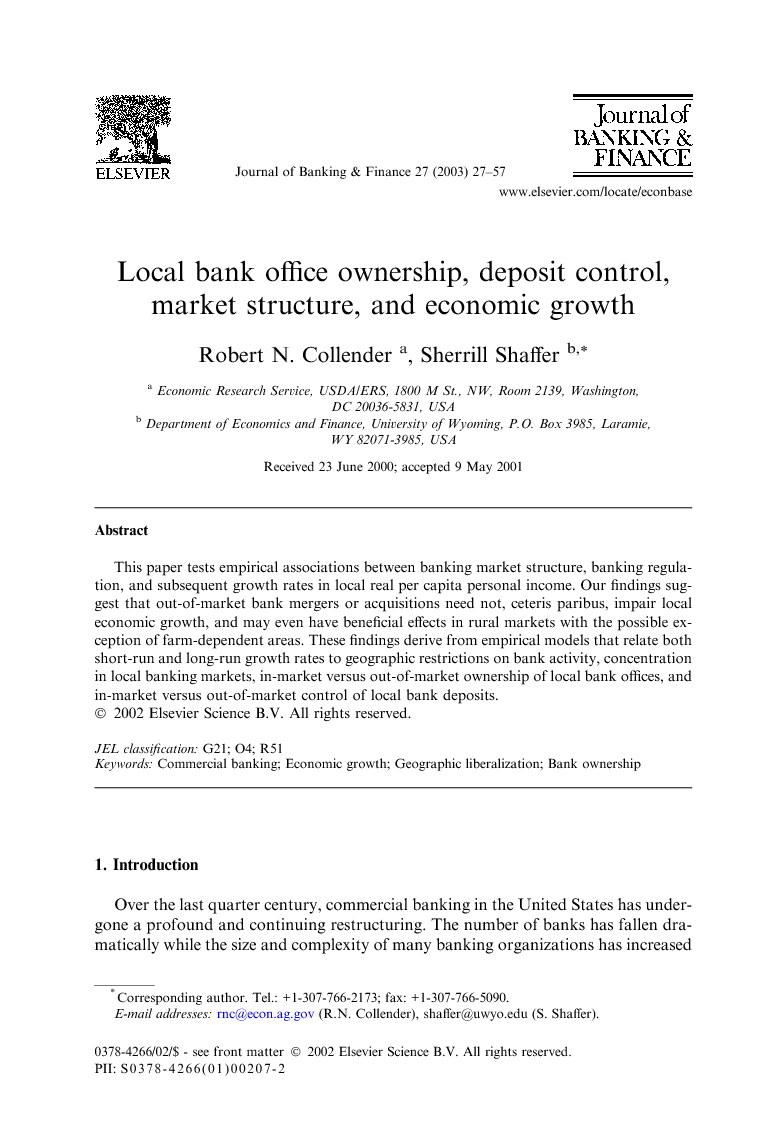 This paper tests empirical associations between banking market structure, banking regulation, and subsequent growth rates in local real per capita personal income. Our findings suggest that out-of-market bank mergers or acquisitions need not, ceteris paribus, impair local economic growth, and may even have beneficial effects in rural markets with the possible exception of farm-dependent areas. These findings derive from empirical models that relate both short-run and long-run growth rates to geographic restrictions on bank activity, concentration in local banking markets, in-market versus out-of-market ownership of local bank offices, and in-market versus out-of-market control of local bank deposits.

Over the last quarter century, commercial banking in the United States has undergone a profound and continuing restructuring. The number of banks has fallen dramatically while the size and complexity of many banking organizations has increased (Berger et al., 1995). As the number of chartered banks in the U.S. fell from roughly 14,000 in 1973 to 8774 in 1998, the total number of bank offices rose from about 40,000 to 70,731 in the same period. The largest eight banking firms increased their share of total bank assets from 22% in 1988 to 36% in 1997. Banks with less than $100 million in assets (1994 implicit GDP deflator dollars) held 14% of bank assets in 1979 but only 7% by 1994. During the same period, banks with over $100 billion grew from 10% to 20% of total bank assets. These trends have accelerated in the past few years as interstate banking has phased in. This restructuring has been fostered by technological advances, competitive forces, and regulatory and statutory changes. One major regulatory change has been the wholesale relaxation of geographic restrictions on banking activity. In 1960, 39 states imposed some limit on intrastate branching, with 19 states prohibiting branching altogether. In addition, 22 states limited the activities of multibank holding companies, which serve as a functional alternative to branching banks. Of these 22 states, 15 prohibited multibank holding companies altogether. Some states limited the number of bank offices (unit banking states) or the geographic scope of any branching (often to the home county). In 1973, over 60% of banks (9200 of 13,964) were unit banks. This proportion decreased to roughly 50% by 1984 (7426 of 14,483) and to 33% (3279 of 9510) by 1996. In terms of total banking offices, the change is more dramatic. Unit banks represented about one quarter of all banking offices in 1973, about 15% in 1984, and about 5% by 1996. The restructuring of U.S. commercial banking has raised questions concerning its economic consequences, both for the economy as a whole and for those businesses and areas most likely to bear adverse consequences disproportionately: small businesses, small banks, and rural areas (see, for example, USDA, 1997; Federal Reserve Bank of Kansas City, 1997). The ongoing consolidation of European banking has raised similar concerns in that context as well. This paper focuses on the association between various measures of economic growth and the structure and location of bank ownership in local markets. The study represents a first empirical look at the impact of out-of-market bank ownership and local bank market concentration on per capita income growth rates. In examining these linkages, we control for the nature of the local economy, ex ante bank ownership structure and market concentration, and coevolution of bank structure and market concentration. We investigate possible omitted variables and reverse causality as well. The results suggest that out-of-market bank mergers or acquisitions need not, ceteris paribus, impair local economic growth, and may even have beneficial effects in rural markets with the possible exception of farm-dependent areas. Rural areas, especially those traditionally served by unit banks, have a long history of fear, suspicion, and antipathy toward bank consolidation and nonlocal control. Many rural residents and business people expect the current restructuring to harm their communities despite fairly compelling evidence that some degree of liberalization provides considerable overall economic benefits. These fears arise in part from northern European agrarian traditions that emphasized the need to limit banking firms. Regardless of the economic merits of these beliefs, they undergird popular support for restrictions on banking activities.1 Because of this background, we also present separate estimates for farm-dependent counties, as defined by the USDA. The results differ from those in other rural counties in ways that suggest an empirical basis for the traditional views. The paper proceeds as follows. The next section discusses why locally owned banks may behave differently from nonlocally owned banks, especially in economically small areas. We then review the literature on the most controversial aspects of liberalizing geographic restrictions on commercial banking and the impact on rural areas. Next, we review the relatively new literature relating financial factors to general economic performance. Subsequent sections present our empirical model, data, and results. Finally, we discuss the conclusions from this work and avenues for fruitful further research.

Local banks may behave differently from nonlocal banks because of superior access to local information, greater commitment to local prosperity, and differences in technology or risk management, both of which tend to be related to bank size. A large body of empirical research exists on the impacts of deregulation, concentration, and out-of-market entry on bank behavior. That research has focused on changes in loan portfolio size, allocation, and quality, operating efficiency, risk management, loan and deposit pricing, and small bank competitiveness following liberalization or bank consolidations. Extant results provide evidence that liberalization often affects bank behavior and that large banks often behave differently from small banks. However, that research does less to address the underlying issue of whether these differences are beneficial or detrimental to local economies. Another line of research has found important positive linkages between financial market structure and economic growth, both internationally and domestically. This paper extends that line of inquiry by relating banking market structure and geographic regulation to economic growth at the local market level. A central issue is the distribution across metropolitan and nonmetropolitan areas of the previously documented relationship between geographic deregulation and state-level growth. Other key issues concern the impact of bank market concentration, out-of-market ownership of local bank offices, and out-of-market control of local deposits. We estimate separate long-run and short-run models for metropolitan, nonmetropolitan, and farm-dependent markets. The latter markets are a subset of nonmetropolitan markets and are of interest because of the historic link between these markets and popular support for restrictions on bank branching. The long-run models span two time periods: 1973–84, which largely predates liberalization in nonmetropolitan areas; and 1984–96, which coincides with increasing liberalization of geographic banking restrictions. Our results indicate an important linkage between geographic liberalization and local growth in the short run. Estimates from model (1) of the total impact from liberalization (allowing both mergers and acquisitions and de novo entry) in metropolitan markets are 1.22% per year or 88% of expected growth rates. Nonmetropolitan markets exhibit a smaller but still important impact of 0.88% per year or 56% of expected growth rates. These results are qualitatively robust to different specifications, though the magnitudes depend somewhat on weighting or on the inclusion of lagged dependent variables. Controlling for market concentration and bank ownership structure does not materially alter these coefficients or their statistical significance, indicating that observed levels of bank market concentration, bank ownership, and deposit control do not capture the impact of liberalization on local short-run growth. In addition, while F-tests indicate that market structure is statistically significant, the location of neither bank office ownership nor deposit control is statistically related to short-run growth in nonmetropolitan areas. However, in metropolitan areas, out-of-market ownership of bank offices is associated with lower short-run growth rates, but the magnitude of this effect is economically small. Results from our long-run model generally support and enrich our short-run results. Two features are particularly striking. First, no evidence suggests that nonlocal banks are detrimental to local economic growth in rural areas in the more recent period. Second, the impact of nonlocal banks is more positive in rural areas in the later period compared to the earlier period, but the reverse is true of metropolitan markets. Results from farm-dependent markets, however, show that these associations are not universal associations. In farm-dependent markets, liberalization is associated with a decrease in short-run growth, and higher initial levels of out-of-market bank ownership are associated with slower long-run growth in the more recent period. However, the short-run result is not statistically robust to the inclusion of lagged dependent variables to control for local business cycles. These findings suggest that out-of-market bank mergers or acquisitions need not, ceteris paribus, impair local economic growth, and may even have beneficial effects in rural markets. Although the empirical tests here cannot identify a mechanism by which this effect might operate, they suggest avenues for future research. For example, it is a paradox that liberalization appears to have a more positive association with growth in metropolitan markets than in nonmetropolitan markets, but that out-of-market owned banks, per se, appear to be more negatively associated with growth in metropolitan areas. This research could be extended in a number of directions. For example, future research could explore the association of local growth to local presence of banks of different asset sizes or of local headquarters of multimarket banks. Alternative explanations for the apparent connection between geographic liberalization and economic growth beyond measures of bank ownership or observed market structure should also be explored. J&S believe their evidence to be consistent with improved quality of loan portfolios. Other possible explanations may involve improvements in bank operating efficiency and the quality of bank intermediation related to changes in market contestability and the market for control of underperforming banks.