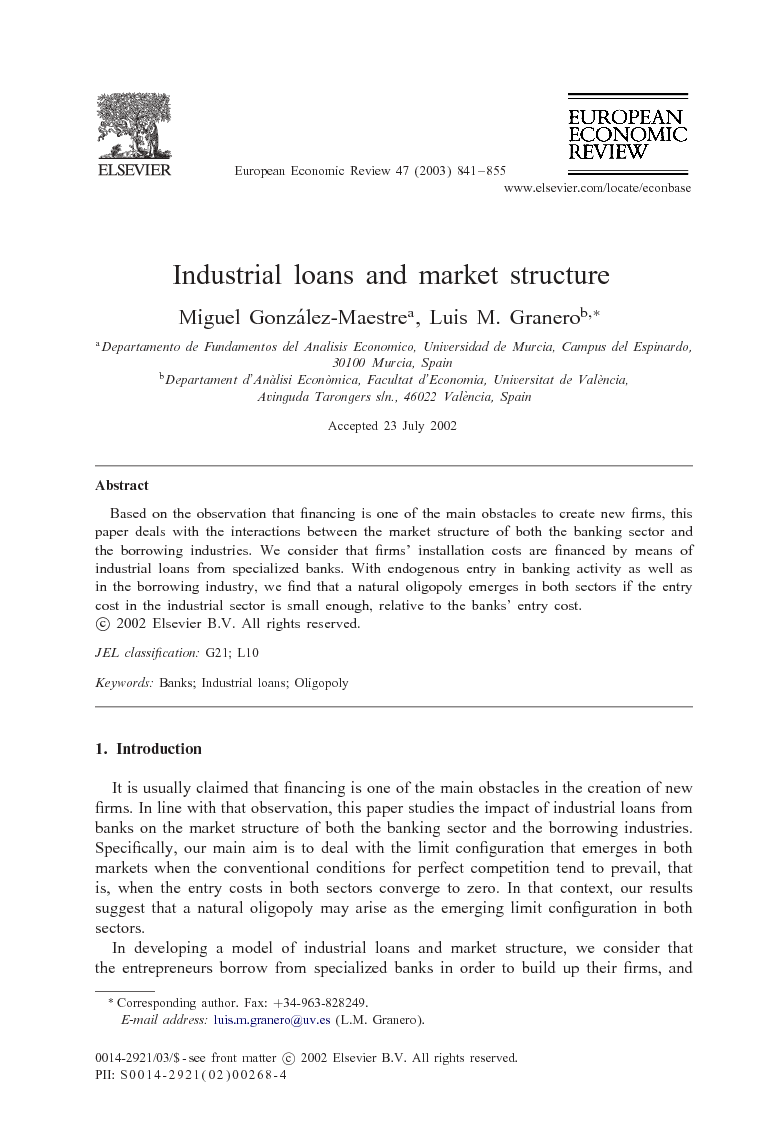 Based on the observation that financing is one of the main obstacles to create new firms, this paper deals with the interactions between the market structure of both the banking sector and the borrowing industries. We consider that firms’ installation costs are financed by means of industrial loans from specialized banks. With endogenous entry in banking activity as well as in the borrowing industry, we find that a natural oligopoly emerges in both sectors if the entry cost in the industrial sector is small enough, relative to the banks’ entry cost.

The results of this paper show that some aspects of the banking activity can have relevant implications for the market structure of the borrowing industries. As a first step, in a benchmark with an exogenous number of banks, we investigate the relationship between the number of banks and the equilibrium in both the market for loans and the product market. In that setting, our analysis has a number of policy implications. For example, it is apparent that mergers among banks can affect the structure of the banking industry, but we can also analyze the way in which such mergers can affect the configuration of those sectors financed through industrial loans from banks. In particular, our results suggest that even a relatively small decrease in the number of banks can cause an important fall in the degree of competition among the borrowing firms and in overall welfare. Under endogenous entry in the market for specialized industrial loans, we show that those loans create a strategic link between the banking sector and the industries that borrow from banks. In that context, our results suggest that natural oligopoly might arise not only in the banking activity but also in the product market. This leads to an alternative explanation to the persistence of anticompetitive market structures in some of the sectors involved in the financing of entrant firms. While models explaining natural oligopolies that rely on vertical product differentiation or concave production cost exist, our argument rests on the presence of upstream financial entities. This suggests that our approach can be extended beyond the limits of banking and industrial loans to deal with both the upstream and downstream market structures in vertical relationships.