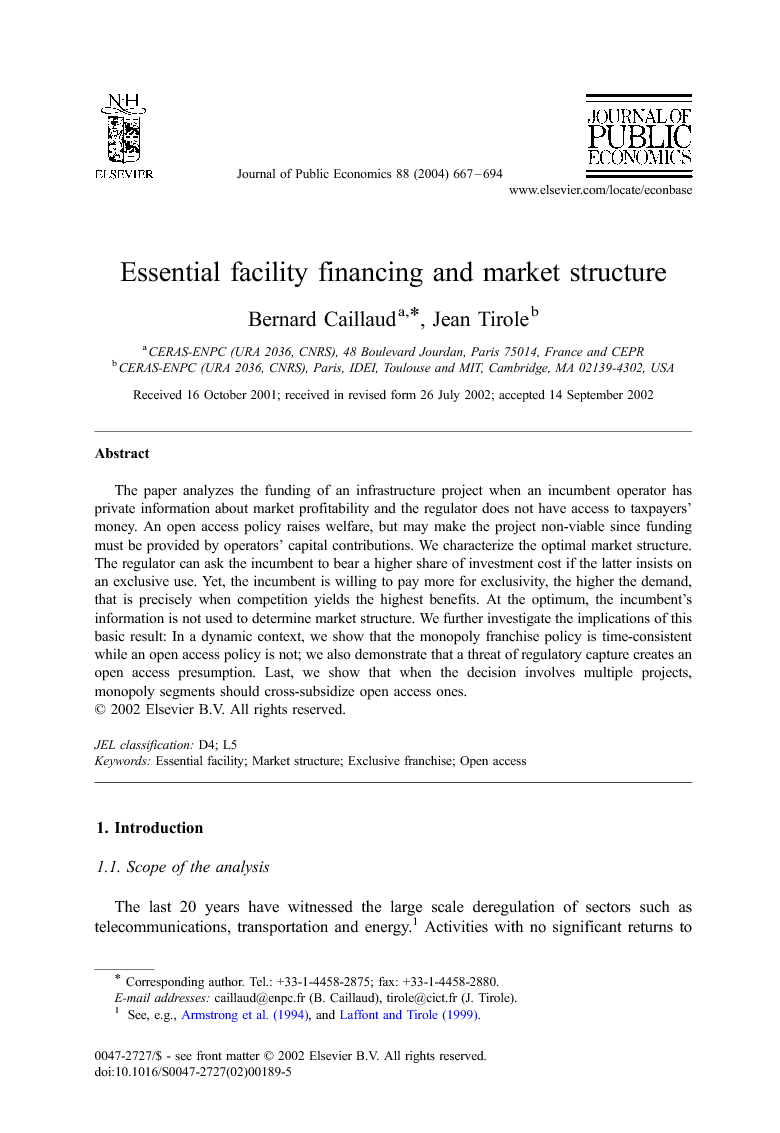 The paper analyzes the funding of an infrastructure project when an incumbent operator has private information about market profitability and the regulator does not have access to taxpayers’ money. An open access policy raises welfare, but may make the project non-viable since funding must be provided by operators’ capital contributions. We characterize the optimal market structure. The regulator can ask the incumbent to bear a higher share of investment cost if the latter insists on an exclusive use. Yet, the incumbent is willing to pay more for exclusivity, the higher the demand, that is precisely when competition yields the highest benefits. At the optimum, the incumbent’s information is not used to determine market structure. We further investigate the implications of this basic result: In a dynamic context, we show that the monopoly franchise policy is time-consistent while an open access policy is not; we also demonstrate that a threat of regulatory capture creates an open access presumption. Last, we show that when the decision involves multiple projects, monopoly segments should cross-subsidize open access ones.

The last 20 years have witnessed the large scale deregulation of sectors such as telecommunications, transportation and energy.1 Activities with no significant returns to scale have been opened to competition and are now subject only to light regulation. By contrast, the other, “infrastructure” activities with significant returns to scale, large sunk costs and/or network externalities (e.g. cable, narrow-and-broadband copper local loops, transmission grids, harbors, regional airports, pipelines, intermodal platforms, high-speed train lines, Eurotunnel), are often deemed to be essential facilities and are then regulated as public utilities or awarded exclusive franchising contracts.2 Focusing on investment in infrastructure projects and their funding, this paper studies the conflict between social optimality and financial viability. When infrastructure projects cannot be financed by direct subsidies (transfers from taxpayers), revenues from downstream service providers are the sole source of funding. For example, a railroad infrastructure owner may be required to invest only in projects that generate enough maintenance cost savings or raise enough access revenues to be financially viable.3 In our model, the downstream segment that makes use of the upstream infrastructure is populated by one incumbent and one (or several) entrant. The incumbent operator and the infrastructure owner are taken to be a single vertically integrated actor;4 but they can indifferently be considered as separate entities, which allows for a wide range of applications. For example, while incumbent railroad operators in Europe (respectively, electricity generators in the US) have been forced to divest the essential facilities, they are still vertically integrated in the US (respectively, in Europe). The downstream market is potentially competitive, but the regulator can cut special deals to limit competition if that is what it takes to make the infrastructure financially viable. Such deals range from an outright monopoly franchise to moderation of competition (like in the case of British rail franchises, or the Australian broadcast cable infrastructure builder who was provided with an “access holiday” for 5 years).5 Since investment profitability is driven by expected future revenues from charging for access, the incentives to invest in infrastructure are related to market design at the downstream level. The static vision of access policies is thus put into a new perspective, as possibly resulting from an ex ante optimal arrangement to finance, build and operate infrastructure projects.6 Although our analysis is primarily motivated by infrastructure investment in regulated sectors (transportation, energy, telecommunications), it also sheds light on the twin issue of the treatment of essential facilities in antitrust law. Essential facilities have been defined by American and European competition authorities as facilities the access to which is essential (and not just cheaper than the alternative) in order to compete on the downstream market, and whose owner is dominant and has no valid reason (lack of capacity, cost of achieving interoperability, protection of IP rights,…) to deny access. Competition authorities often face a dilemma between granting generous access to the essential facility and thereby generating substantial social benefits from competition, and letting the facility owner recoup its investment. Indeed, competition authorities usually exclude patented innovations from the scope of application of the essential facility doctrine even though such innovations often meet the essential facility criteria, on the grounds that the patentees’ freedom to choose their licensees and licensing fees encourages innovation. Competition authorities face “ex post” the same dilemma as the regulators in regulated industries do “ex ante”: More competition increases welfare once the facility is built, but may result in a lower-quality facility or in no facility at all.

We summarized the main insights in the introduction; so we will conclude solely with a mention of a few alleys for future research. Needless to say, this first investigation of endogenous market structure with common values leaves scope for further theoretical inquiry. As discussed in the text, it would be important to study market structure choices in situations in which the regulator can avail herself of a larger regulatory toolbox, including earnings sharing scheme and usage contingent access charges. Another promising area of research would look at market structure design with multiple informed operators. Our analysis fits best for situations with an old monopoly legacy. Other types of projects may involve more symmetrically informed operators, each potentially having some unique piece of information (for example θ is the sum of private information θi held by potential operator i). The rotten-segment curse effect and a number of its implications would still hold in this broader context, but some interesting new insights would probably emerge. Last, the implications of the present inquiry in different contexts are definitely worth-drawing. As we noted in the introduction, competition authorities in their application of the essential facility doctrine confront a similar financing-vs.-competition trade-off and, like regulators of telecommunications, energy or transportation services, lack information about market viability. These topics and a number of interesting others are left for future research.