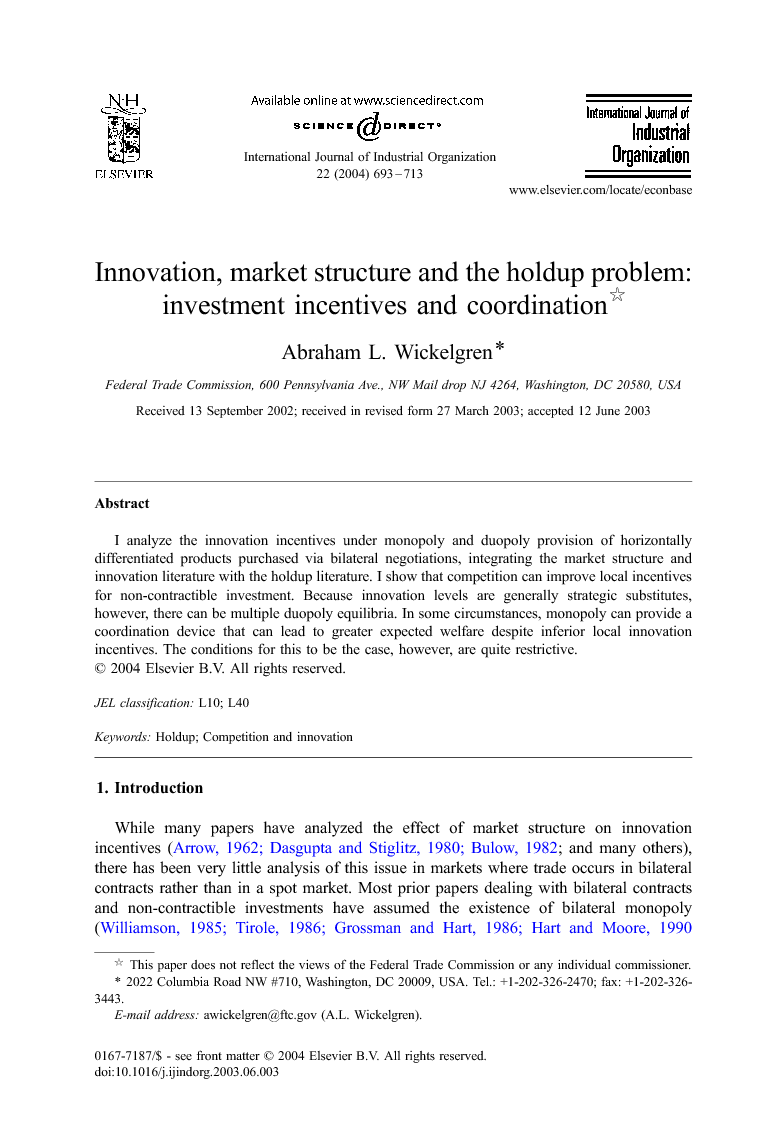 I analyze the innovation incentives under monopoly and duopoly provision of horizontally differentiated products purchased via bilateral negotiations, integrating the market structure and innovation literature with the holdup literature. I show that competition can improve local incentives for non-contractible investment. Because innovation levels are generally strategic substitutes, however, there can be multiple duopoly equilibria. In some circumstances, monopoly can provide a coordination device that can lead to greater expected welfare despite inferior local innovation incentives. The conditions for this to be the case, however, are quite restrictive.

Analyzing the welfare effects of market structure in markets where bilateral contracting is the norm is very different from analyzing these effects in markets where spot market transactions predominate. With efficient bilateral contracting, there is no ex post allocation inefficiency; market structure only affects welfare when it affects the hold up problem. Because of the holdup problem, firms will have insufficient incentives to improve the quality of their products. In this paper's model, competition among suppliers reduces this problem. Competition, however, brings with it the problem of multiple equilibria. When that is the case, the more asymmetric is the development of the two products the greater is welfare. If the value of consumers' third option is large enough, then monopoly can lead to an asymmetric development outcome that is superior to the symmetric duopoly equilibrium. If the symmetric duopoly equilibrium occurs with large enough probability, then the coordination benefits of monopoly might make it preferable to duopoly. Of course, the paper assumes that a firm's ability to develop its product(s) (the development cost function) is independent of market structure. If innovation synergies occur when one firm owns both products, then this makes monopoly more advantageous than the model in this paper predicts. In fact, because (efficiently) negotiated trade eliminates the effect of market structure on allocation efficiency, it will be much easier for synergies to result in greater welfare with less competition than in markets governed by fixed price transactions. The paper also assumes that ε, the relative preference parameter, is common knowledge. While the suppliers often know much more about their products than customers, and often learn a great deal about how the customer will use the product in the sales process, the customer will always know more about its valuation for each product than the suppliers. Because I assumed away this type of information asymmetry, there were no bargaining failures in the model. Since bargaining failures reduce welfare, the effect of market structure on the incidence of bargaining failures is important. The direction of this effect is unclear. On the one hand, under monopoly the disagreement option is worse for the buyer, so it has a greater incentive to avoid a bargaining failure. On the other hand, the consequences of bargaining failure in this situation are more severe. Bargaining failures could also impact the results to the extent they affect innovation incentives. The social planner will always weigh bargaining failures more severely than the monopolist since the monopolist only bears part of the cost of a failure. Asymmetric information could also affect innovation incentives if it creates a business stealing incentive in duopoly. This is unlikely to occur, however, since it can only happen if an indifferent customer must pay a positive price for either product. Since the most likely form of bargaining failure from asymmetric information is delay, there should be no business stealing incentive even with asymmetric information. That said, analyzing more precisely the effect of asymmetric information would be quite interesting.