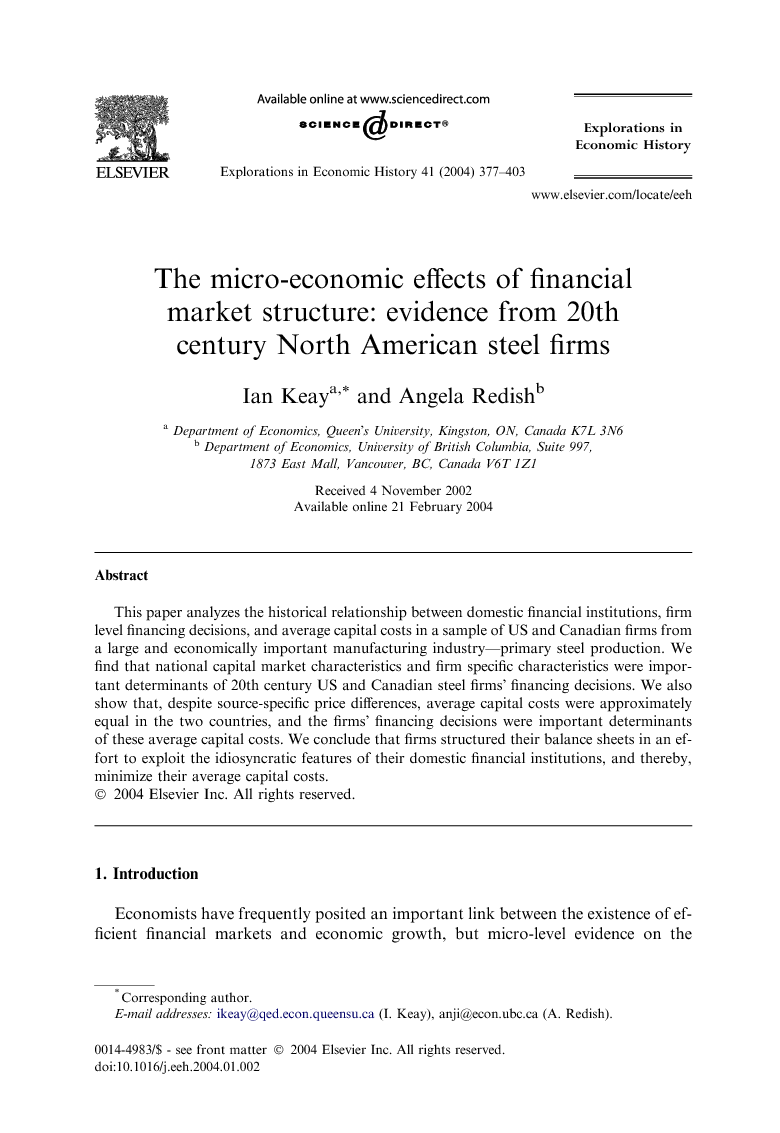 Economists have frequently posited an important link between the existence of efficient financial markets and economic growth, but micro-level evidence on the nature of this link has been scarce.1 In this paper we use evidence from a sample of 20th century North American primary steel producers’ balance sheets to investigate the extent to which firms sought to minimize their average capital costs by exploiting the unique characteristics of their domestic financial institutions. Specifically, we test the strength of the relationship between domestic capital market characteristics and firm specific financing decisions. Having established the importance of this link, we then test for a relationship between these firm specific financing decisions and average capital costs. Primary steel producers are the focus of our study because they have traditionally been a significant part of the industrial economies of the United States and Canada, and we have access to financial information for virtually all North American firms. Financial institutions in Canada and the United States are of interest because, while they were sophisticated and diverse in both nations throughout the 20th century, they were not identical. In particular, they differed in the extent of the markets for tradable financial assets and in the nature of the banking systems. We find that US and Canadian firms used different financial instruments to fund their growth: the US firms consistently employed significantly less short-term debt and formal stock issues, but significantly more long-term debt and retained earnings. If we control for the idiosyncratic features of the capital markets in the two countries, then the cross-border differentials among three of the four financial instruments available to the firms become statistically indistinguishable. If we control for firm specific characteristics, we cannot identify any statistical differences in the composition of the US or Canadian firms’ balance sheets. In addition to our identification of a relationship between the composition of national capital markets, firm specific characteristics and firms’ financing decisions, we also find that despite higher prices for capital flowing from formal securities markets in Canada, there was no significant difference in the average price paid for capital by the steel firms in the two countries. Our inability to distinguish between US and Canadian average capital costs simply emphasizes the importance of micro-level financial decisions and the fungible nature of capital. In particular, the Canadian firms relied to a greater extent on funds from internal, short-term, or informal sources that provided them with capital at a price that was low, relative to the price their US counterparts paid for their capital from these same sources. The structure of the firms’ balance sheets was a significant determinant of their average capital costs. Cross-border differences in the firms’ balance sheets, therefore, reflect the producers’ and investors’ responsiveness in the face of idiosyncratic financial environments. These findings imply that for diverse, sophisticated markets, such as those found in Canada and the US during the 20th century, there were no specific features that necessarily characterized an “optimal,” or for that matter a “suboptimal,” set of financial institutions. We may also conclude that when firms choose financial instruments in a manner that minimizes their average capital costs (or at least sets these costs equal to their closest and largest international trading partner) the efficiency of a capital market cannot be established by studying individual financial institutions in a piecemeal fashion. Our results contribute to at least three branches of literature—one that focuses on the relationship between capital markets and economic development, a second that studies firms’ financing decisions, and a third that discusses the role played by capital markets in 20th century North American industrial performance. Levine (1997) surveys much of the more recent quantitative literature that investigates the link between financial institutions and economic growth. While emphasizing the channel through which this link operates, our results are consistent with his conclusion that, “…the preponderance of theoretical reasoning and empirical evidence suggests a positive, first order relationship between financial development and economic growth.”2Myers (2001) surveys recent research on the “pecking order” hypothesis. This branch of the financial economics literature suggests that (at the margin) firms’ choices among financial instruments may be motivated by differences in transactions costs associated with variations in firm specific characteristics and the characteristics of available financial institutions. Because our results confirm that US and Canadian steel producers structured their balance sheets in a manner that reflected differences in their domestic financial markets and differences in their firm specific characteristics, they provide evidence that is consistent with this hypothesis.3 Historical literature in both Canada and the United States has argued that the structure of financial markets, albeit in different ways, has impeded industrial development. There is, for example, an extensive Canadian literature that argues that the thin markets for industrial securities, and the ‘clubby’ atmosphere of the small number of banks, raised the cost of financing industrial expansion and retarded Canadian industrial growth.4 The insignificant differences we find between US and Canadian average capital costs undermines this view.5 This paper begins by documenting the differences between the two countries’ financial markets; the characteristics of the banking systems, the extent of the markets, and the prices in the markets. We then describe the portfolio choices made by the steel producers in the two countries and show that (unconditionally) there were significant differences between firms in the United States and Canada. These differences reflected both firm specific characteristics and the structure of the financial institutions in the two countries. We then turn to an investigation of the capital costs paid by the US and Canadian firms. We demonstrate that, despite differences in the cost of capital on formal securities markets in the two countries, differences in balance sheet composition resulted in there being no significant differences in the price paid for capital averaged across all sources. The final section concludes.

Steel firms in Canada and the US operated in different financial environments, and the historiography of each country has emphasized the potential for industrial retardation associated with the domestic institutions and regulatory frameworks. We have compared the 20th century financing decisions made by North American steel firms to determine whether institutional differences were reflected in capital costs. We find that US and Canadian steel firms employed financial instruments that were domestically unique, and these instruments were, at least in part, influenced by idiosyncratic domestic financial institutions. We also find that US and Canadian steel producers paid different costs for capital flowing from informal sources and formal sources, but we cannot distinguish between their capital costs averaged across all sources. The explanation for this lies in the composition of the steel firms’ balance sheets, which was an important determinant of average capital costs and the premia paid by the firms in excess of the return required to raise funds on their domestic bond and stock markets. It appears, therefore, that the firms in both countries chose their portfolios in a manner that recognized and exploited the idiosyncrasies in their domestic capital markets, such that average capital costs in the two countries’ steel industries were indistinguishable during the 20th century. Substitution between financial instruments, therefore, allowed firms to minimize their average capital costs, and to evade the potential costs associated with the small scale and ‘clubby’ nature of Canada’s capital markets and the instability of the US unit banking system.