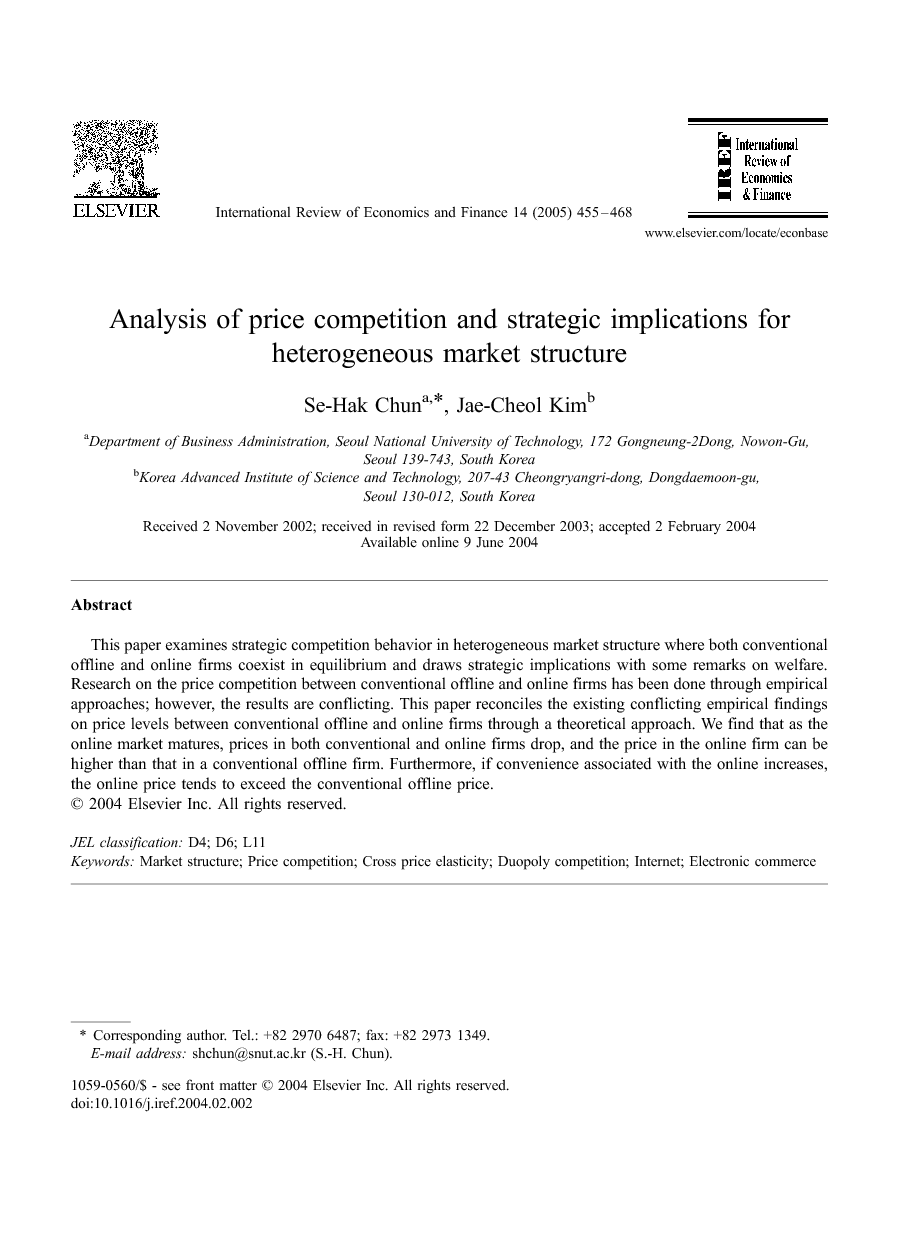 The Internet has fundamentally changed the commerce environment, offering business and consumers a powerful communication channel, creating massive potential sales. It creates a heterogeneous market structure, which is different from conventional markets. In addition, the Internet enables consumers to improve their bargaining position with sellers in both conventional offline and online markets and allows sellers to improve targeted advertising and to reduce other operation costs. Recent research in electronic commerce has been done in various areas, but there has been little theoretical attempt to evaluate retail market equilibrium, where conventional and Internet markets coexist. Research on the price levels between conventional offline firms and online firms has been done through empirical approaches; however, the results are conflicting. Table 1 shows an overview of empirical results with respect to price level and classifies the studies in three categories: higher or lower prices in electronic commerce or inclusive results. Table 1. Empirical results on price levels Results Studies Higher prices in online market Arbeiterkammer Wien (1999), Bailey, 1998a and Bailey, 1998b, Cortese and Stepaneck (1998), Frank and Hepperle (2001), Erevelles et al. (2001) Lower prices in online market Ancarani and Shankar (2002), Brynjolfsson and Smith (2000), Morton et al. (2001) Inconclusive Clay et al. (2001), Pan et al. (2002) Table options Bailey, 1998a and Bailey, 1998b compared the prices for books, CDs, and software sold on the Internet and in conventional offline channels in 1996 and 1997. Bailey found higher prices in online channels for each product category. He suggests that the higher prices he observed could have been due to the possibility that many online firms add value in the form of convenience and other characteristics that consumers are willing to pay for (especially busy, affluent consumers). Cortese and Stepaneck (1998) point to several online markets that realize higher prices, on the average, than equivalent offline markets. Erevelles, Rolland, and Srinivasan (2001) find that the prices of vitamins from Internet firms were higher than for traditional offline firms. Other studies also show results that parallel those shown in Table 1 (Arbeiterkarmmer Wien., 1999 and Frank & Hepperle, 2001). Brynjolfsson and Smith (2000) examined prices for books and CDs sold through the Internet and conventional channels in 1998 and 1999. Unlike Bailey, they found that the Internet had lower unit prices.1 They argue that this is because the online market has grown and it has become efficient. Morton, Zettelmeyer, and Risso (2001) analyze dealer pricing of automobiles in California and they find that online prices are lower than offline prices, although the difference was only 2%. Ancarani and Shankar (2002) find that the prices of books and CDs in Italy were lower at online firms than at offline firms by about 4–6%. Clay et al. (2000), however, do not find any significant differences in the two channels for books, noting that the unit prices in online and physical book firms during the week of April 19, 1999 were the same. Pan, Ratchford, and Shankar (2002) also find that some online prices are higher than offline prices, and other online prices are lower, depending on the products. Given these conflicting findings, we analyze pricing strategies between a conventional offline firm and a pure online firm through a theoretical approach by constructing a simple duopoly model and discuss some implications with some remarks on welfare. To do this, we choose the simplest and commonly used spatial competition model of Hotelling (1929) and Tirole (1992). In addition, we try to analyze the model when the online firms compete within the online market as well as offline markets using undercut-proof property (Shy, 2002). Section 2 presents the duopoly model between a conventional offline firm and a pure online firm. Section 3 explores equilibrium prices in the duopoly model and draws some implications. Section 4 analyzes the online competition model and discusses some implications. Section 5 remarks on the welfare analysis. In Section 6, conclusions and future research work are discussed.