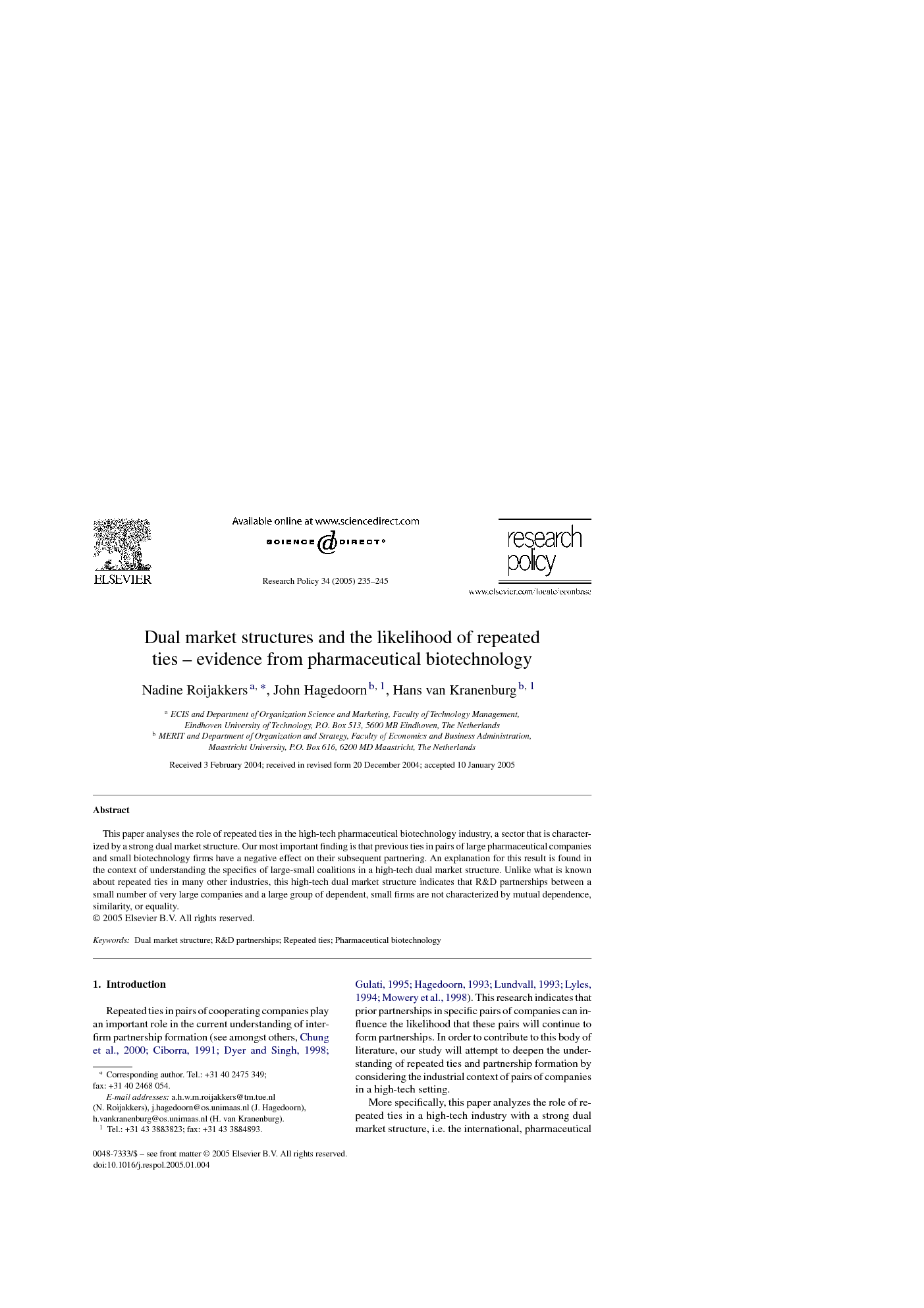 This paper analyses the role of repeated ties in the high-tech pharmaceutical biotechnology industry, a sector that is characterized by a strong dual market structure. Our most important finding is that previous ties in pairs of large pharmaceutical companies and small biotechnology firms have a negative effect on their subsequent partnering. An explanation for this result is found in the context of understanding the specifics of large-small coalitions in a high-tech dual market structure. Unlike what is known about repeated ties in many other industries, this high-tech dual market structure indicates that R&D partnerships between a small number of very large companies and a large group of dependent, small firms are not characterized by mutual dependence, similarity, or equality.

Repeated ties in pairs of cooperating companies play an important role in the current understanding of inter-firm partnership formation (see amongst others, Chung et al., 2000, Ciborra, 1991, Dyer and Singh, 1998, Gulati, 1995, Hagedoorn, 1993, Lundvall, 1993, Lyles, 1994 and Mowery et al., 1998). This research indicates that prior partnerships in specific pairs of companies can influence the likelihood that these pairs will continue to form partnerships. In order to contribute to this body of literature, our study will attempt to deepen the understanding of repeated ties and partnership formation by considering the industrial context of pairs of companies in a high-tech setting. More specifically, this paper analyzes the role of repeated ties in a high-tech industry with a strong dual market structure, i.e. the international, pharmaceutical biotechnology industry. Such a dual market structure is largely determined by on the one hand a group of large, integrated, international, and established companies and on the other hand a group of relatively small, specialized firms. The high-tech dual market structure in the pharmaceutical biotechnology industry is apparent in the role played by a small group of very large pharmaceutical companies and a large group of relatively small biotechnology firms (Powell, 1996, Powell et al., 2005 and Saviotti, 1998). Previous research has already established that inter-firm partnering in the pharmaceutical biotechnology industry is rather specific in terms of the concentration of inter-firm R&D partnering within these two groups of companies (Kenney, 1986, Powell, 1996 and Rothaermel, 2000). To the best of our knowledge, the current literature on the effect of previous ties on subsequent inter-firm partnering has paid no attention to the specific setting of a dual market structure in a high-tech industry. Early, seminal contributions to the analysis of dual market structures, however, did reveal the impact of such market structures on innovative performance, productivity, earnings, financial issues, labor relations, and marketing practices (see Averitt, 1968, Bowring, 1986 and Sutton, 1992, 1998). It is the objective of this paper to investigate whether in this sort of industry the effect of previous ties on subsequent inter-firm partnering might also be different from what is known from many studies on other industries with more evenly distributed populations of companies. In the following section we discuss our hypothesis, derived from current theory, that stipulates the expected effect of previous ties on subsequent partnering. In order to test our hypothesis, we construct a panel dataset that contains information about the partnering behavior of pairs of companies. In the methodological section we discuss the data, sample, and the specific variables we include in our panel logit models. This is followed by sections that present and discuss the results and the implications of our research.