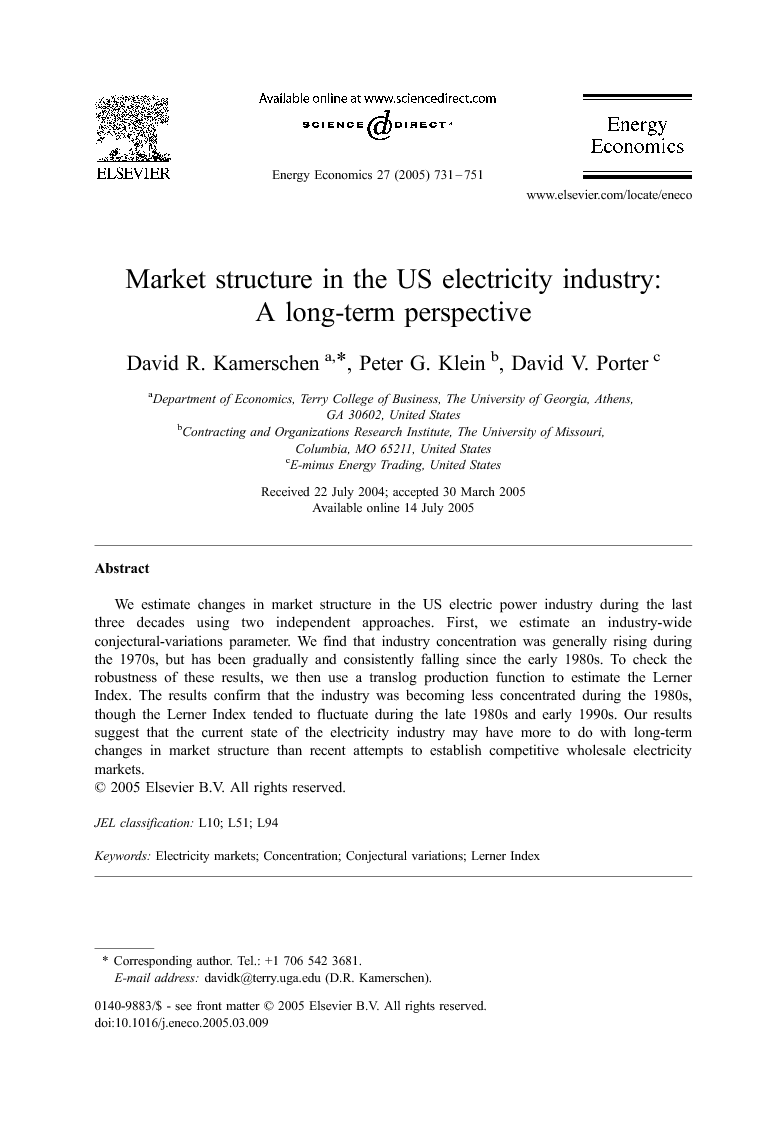 We estimate changes in market structure in the US electric power industry during the last three decades using two independent approaches. First, we estimate an industry-wide conjectural-variations parameter. We find that industry concentration was generally rising during the 1970s, but has been gradually and consistently falling since the early 1980s. To check the robustness of these results, we then use a translog production function to estimate the Lerner Index. The results confirm that the industry was becoming less concentrated during the 1980s, though the Lerner Index tended to fluctuate during the late 1980s and early 1990s. Our results suggest that the current state of the electricity industry may have more to do with long-term changes in market structure than recent attempts to establish competitive wholesale electricity markets.

Since the 1930s electric utilities have been regulated by the states in which they provide service. Nominal and real electric prices dropped from 1930 to 1960 as power plants became larger and more efficient and fuel costs fell. This changed in the 1970s, as fuel prices, especially oil, soared. The Department of Energy was created in 1977 along with an independent regulatory authority, the Federal Energy Regulatory Commission, that assumed most of the statutory duties of the former Federal Power Commission. The 1978 Public Utility Regulatory Policies Act (PURPA) was passed to deal with these fuel constraints, and subsequently large utilities began facing competition from small independent producers and their own large industrial customers.1 Congress formally deregulated the wholesale electric market with the Energy Policy Act of 1992.2 On April 1, 1998, the largest electric power market in the US, California, further pushed competition by allowing utility ratepayers to buy from any supplier they choose. At the time, other states such as Massachusetts, New Hampshire, New Jersey, New York, Oregon, Pennsylvania, and Rhode Island were in various states of restructuring their electricity markets. According to the Department of Energy's (DOE) September 2000 deregulation update, twenty-three states had enacted deregulation legislation, while another twenty had orders pending or ongoing legislative deregulation investigations. However, while by 2005, eighteen states had deregulated, they did so by retaining control of the “wires” or delivery side of the business, but removing restrictions on the generation and sale of electricity (Smith, 2005). Recent research on electric-market competition has generally focused on the effects of introducing formal markets for wholesale power3 and price spikes and supply problems in California in 2000–2001 and elsewhere. These studies raise questions about the effectiveness of these markets. However, there is relatively little evidence on the long-term trends in the market structure of the US electricity industry following the oil shocks of the 1970s. If concentration, strategic interaction, and other market characteristics are affected by technology, firm organization and governance, the legal environment, and similar factors besides the creation of formal wholesale markets, then a broader perspective may be necessary to understand the effects of recent policy changes on market structure and performance.4 We examine market structure in the US electric utility industry from the 1970s to the 1990s. Our results are interesting. First, using a conjectural-variations (CV) approach, we find that electricity markets became less concentrated beginning in the 1980s, with little change in the trend following the reforms of the 1990s. Second, we use a structural model to estimate a Lerner Index for US electricity markets for part of our sample period, 1981–1998. The Lerner approach largely confirms the results of the CV approach; namely, electricity markets became less concentrated during the 1980s (with mixed results during the 1990s). In short, changes in the industry prior to the 1990s—primarily technological change, combined with modest deregulation—appear to have had a greater impact than previously acknowledged. This suggests that the creation of wholesale (and later retail) markets for electricity should not be characterized as a radical innovation, but rather the continuation of a secular trend. The remainder of the paper is organized as follows. Section 2 outlines the conjectural-variations framework we use here. Section 3 applies this framework to the US electricity and presents our estimates. Section 4 presents our structural analysis, describing the translog production function and providing our estimates of market concentration.

A nationwide movement to deregulate (more precisely, restructure) electric utilities emerged in the 1990s. The process gained momentum on December 20, 1995, when the California Public Utility Commission (CPUC) issued an opinion that California electricity consumers should be able to choose their provider by 2003. On September 23, 1996, California Governor Pete Wilson signed Assembly Bill 1890 into law, mandating a 10% rate cut for most electricity customers, and allowing most customers to choose their provider by 1998 (LaBorde, 1998: R8). In the wake of California's action, legislation to deregulate electric utilities has been proposed or adopted in every state in the country. However, there is concern that California's subsequent energy crisis may be in part the result of rushing the deregulating of the retail electric markets (see, e.g., Smith, 2000). If California is a bellwether for what other states may face in their deregulated markets, the deregulation movement may be arrested or slowed considerably. According to Joskow (2001), the problem in California was not inherent with deregulation, but rather with the way California implemented its reforms combined with “a good deal of bad luck and ineffective government responses.” Making competition more intense has proved to more difficult that states anticipated, largely because erratic wholesale prices have increased retail rates and a credit crunch has decreased the pool of competitors (see, e.g., Smith, 2005). While not directly addressing broader issues related to competition per se, we find compelling evidence that the electric industry was becoming less concentrated during the 1980s, before the reforms discussed above were implemented. In the 1990s, the picture is less clear. Our estimated Lerner Index fell steadily from 1981 to 1987, fluctuated moderately from 1988 to 1994, increased from 1995 to 1997, and fell again in 1998. According to the conjectural variation approach, the electricity industry has become gradually and consistently less concentrated from 1982 to 1998. Indeed, the CV parameter is steadily declining long before deregulation, and the rate of decline following 1995 is about the same as that before 1995. Perhaps it is too early to tell what deregulation has accomplished or will accomplish in the future, but it is clear that electricity markets were opening up even before the formal deregulation of the late 1990s. Thus, our results are consistent with the view that deregulation has (so far) not had a measurable effect on economic performance. This leaves us with a mystery. Why was the industry gradually becoming less concentrated without major changes in the regulatory framework? Was it technological or organizational change, or changes in de facto regulation that are difficult to discern? This problem has not really been addressed in the prior literature. In a sense, our results weaken the case for formal deregulation, or at least suggest that competition was gradually being introduced anyway, even without deliberate action by regulators. Of course, we ignore important controversies over the “meaning of competition” (Hayek, 1948), such as actual versus potential competition, static equilibrium versus dynamic process notions of competition, and the like (Machovec, 1995). Still, our findings suggest that the story of electricity restructuring in the 1990s is more subtle and complex than is often recognized.