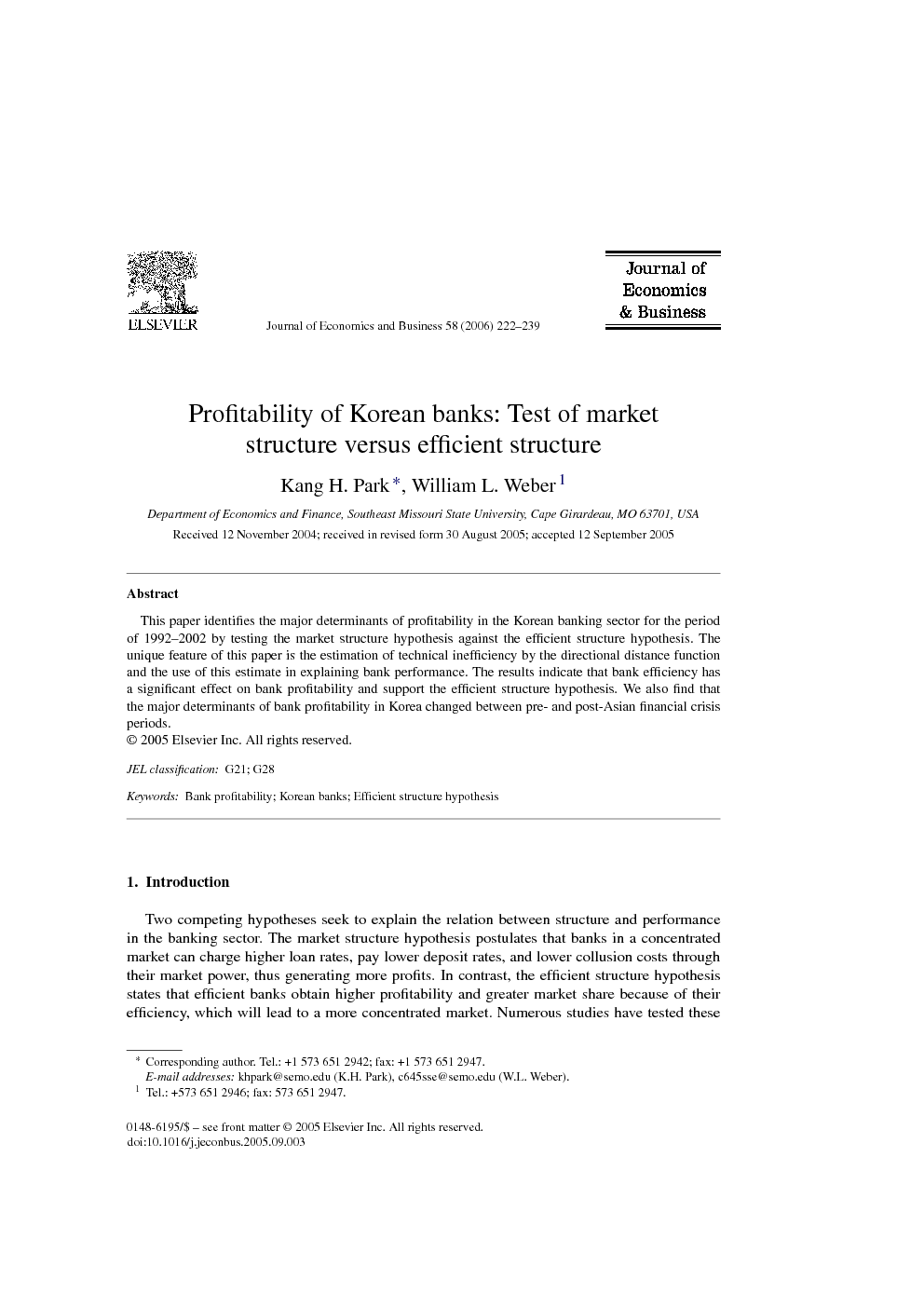 Two competing hypotheses seek to explain the relation between structure and performance in the banking sector. The market structure hypothesis postulates that banks in a concentrated market can charge higher loan rates, pay lower deposit rates, and lower collusion costs through their market power, thus generating more profits. In contrast, the efficient structure hypothesis states that efficient banks obtain higher profitability and greater market share because of their efficiency, which will lead to a more concentrated market. Numerous studies have tested these two competing hypotheses for U.S. banks and European banks (Berger, 1995; Goldberg & Rai, 1996; Maudos, 1998, Shepherd, 1986 and Smirlock, 1985). In many previous studies, a statistically significant positive relationship has been found between market share and bank profitability, while a positive relationship between market concentration and bank performance has not been established.2 Two different interpretations have emerged from this finding. Some researchers (Evanoff & Fortier, 1988; Smirlock, 1985) argued that this finding supports the efficient structure hypothesis, interpreting market share as a proxy for efficiency due to a lack of available efficiency measures. Other researchers (e.g. Kurtz & Rhoades, 1991; Shepherd, 1986) questioned the validity of assuming that market share is a proxy for efficiency, and argued that the finding supports the relative market power hypothesis, which is a variant of the market structure hypothesis. In response to this criticism, direct measures of efficiency have been used in more recent studies (Berger, 1995; Goldberg & Rai, 1996; Maudos, 1998), and these findings support the efficient structure hypothesis. The purpose of this paper is to identify the major determinants of profitability in the Korean banking sector for the period of 1992–2002 by testing the two competing structure/performance hypotheses in an integrated model. In our study, we combine and integrate previous studies on Korean banks which focused on productivity, efficiency, or competition. Gilbert and Wilson (1998) investigated the effects of privatization and deregulation on the productivity of Korean banks for the period 1980–1994. They found that Korean banks dramatically changed their mix of inputs and outputs while they were privatized and deregulated during the 1980s and early 1990s. They also concluded that privatization and deregulation enhanced potential output as well as productivity by measuring technological change from the perspective of the new mix of inputs and outputs. Hao, Hunter, and Yang (2001) extended the analysis of Gilbert and Wilson (1998) in order to identify the key determinants of the efficiency gains. Using the stochastic cost frontier approach, they computed efficiency scores for a sample of nine nationwide banks and 10 regional banks for the period 1985–1995. Banks with higher rates of asset growth, fewer employees per million won of assets, larger amounts of core deposits, lower expense ratios, or classification as a nationwide bank were found to be more efficient. However, they also found that financial deregulation in 1991 had little or no significant effect on the sample banks’ efficiency. Chun and Kim (2004) studied the degree of competition in the Korean banking industry for the period 1994–2001 and examined whether the monopoly power of banks increased along with the increased market concentration after the 1997–1998 Asian financial crisis. Using the Wald test for H-statistics proposed by Panzar and Rosse (1987), they concluded that the banks operated under monopolistic competition both before and after the crisis, although the monopoly power of banks increased after the crisis. Using the DEA method and defining input and output according to the production approach, Cho and Shin (2004) compared technical efficiency, allocative efficiency, and scale efficiency of five big Korean banks with those of all other Korean banks during 1992–2001. They found a decline in both market concentration and the rates of return of the five big banks during 1992–1997. The five big banks also had lower rates of return, but greater cost efficiency and technical efficiency than other banks. They concluded that the Korean government's anti-merger policy prior to the Asian financial crisis of 1997–1998 contributed to excessive competition and diseconomies of scale for larger banks. After the crisis, a more liberal merger and acquisition policy enhanced scale efficiency of larger banks. Since the use of market share as an indicator of efficiency in tests of the relative market power versus efficient structure hypotheses is problematic, we use more direct measures of efficiency in our tests. Two of these efficiency measures are assets per employee or assets per bank branch, and operating expenses per employee or operating expenses per bank branch. Since banks might be able to substitute capital or deposits for labor in the production process, we also estimate the directional distance function as a measure of bank inefficiency. This distance function measures the efficiency with which all outputs are produced from all inputs and is used to explain bank profitability. In the next section, we present two structural models of profitability and an integrated equation in the reduced form to test the competing structure hypotheses. We describe the data in Section 3. In Section 4, we present the directional distance function used to measure bank efficiency, and in Section 5 we present and interpret the estimates of our model. We conclude with a summary and policy implications for the Korean banking sector.

This paper has investigated the relationship between structure and performance in the Korean banking industry during 1992–2002. When bank efficiency is ignored, we find that market share has a significant positive impact on bank profitability, providing evidence in support of the market structure/conduct/performance hypothesis. However, when bank efficiency is explicitly controlled for, the impact of market share on profits becomes insignificant, providing evidence in support of the efficient structure hypothesis. Furthermore, contrary to the market structure hypothesis we find that market concentration has a negative impact on bank profitability over the entire period. Banks with a greater net interest margin, lower operating costs per employee or branch, more assets per employee or branch, less technical inefficiency, a higher equity capital ratio, or a smaller non-performing loan share are found to be more profitable. Classification as a nationwide bank is not an important variable in explaining bank profitability. When the sample period is broken down into three distinct periods, further insight is obtained. During the stable banking period (1992–1996), market concentration, market power, and efficiency are significant in explaining bank profitability. However, during the crisis period (1997–1999) and recovery period (2000–2002), bank efficiency stands out as the primary variable affecting bank profits. While market concentration and market share became less significant over time, the importance of the efficiency variable and its magnitude of influence increased as Korean banks went through turbulence. Consistent with signaling theory, the equity capital ratio has a positive effect on bank profitability during the crisis and recovery periods. This evidence has several policy implications for bank regulation. Under the collusion hypothesis, mergers might be initiated by banks in order to extract consumer surplus, resulting in higher prices to consumers and social inefficiency. On the other hand, according to the efficient market hypothesis, banks are motivated to merge in order to achieve efficiency, and the result is socially optimal. Our findings support the efficient structure hypothesis but not the collusion hypothesis. In light of this evidence the recent government policy to encourage mergers in the banking sector may be justified on the grounds of efficiency and international competition. The recent voluntary merger between Hana Bank and Boram Bank and the involuntary merger between Commercial Bank and Hanil Bank, appear to be headed in the right direction. An IMF study (2001) found that both merged banks have realized economies of scale by rationalizing their operations or branch networks and employees. The study also found that mergers are not a sufficient condition for improved profitability if the underlying banks are unsound. The government's increasing emphasis on bank consolidation is to improve profitability through realization of economies of scale. Even if merged banks have not yet improved profitability, their realization of economies of scale should result in higher profitability in the long run. Another implication of our study is that both banks and regulatory agencies such as the Korea Financial Supervisory Commission should focus more on how to improve efficiency and less on market share or market concentration. Prior to the crisis Korean banks focused on expanding their market share instead of reducing costs or improving efficiency. Such strategies were based on a philosophy of “too big to fail” and a moral hazard effect derived from a perception of the government as lender of last resort and implicit bail-out guarantor. These strategies resulted in excessive borrowing of Korean banks from abroad and lending to the Chaebols—the Korean conglomerates, causing overcapacity in sectors such as automobiles, micro-chips, and steel and diversification of their business into areas unrelated to their specialties. The result was low profits for Chaebols and eventually, many non-performing loans for banks. However, the financial crisis of 1997–1998 shook the Korean banking sector and was a warning to Korean banks to re-evaluate their positions. Although the financial crisis caused much trouble to the Korean economy and particularly Korean banks, the crisis caused banks and regulators to focus on cost reduction and efficiency improvement. The restructuring of the Korean banking sector might not have been possible without the crisis, as inertia prevailed in the Korean banking sector. As bank regulations that limited competition before the crisis were gradually removed, the increasing importance of efficiency was clear.