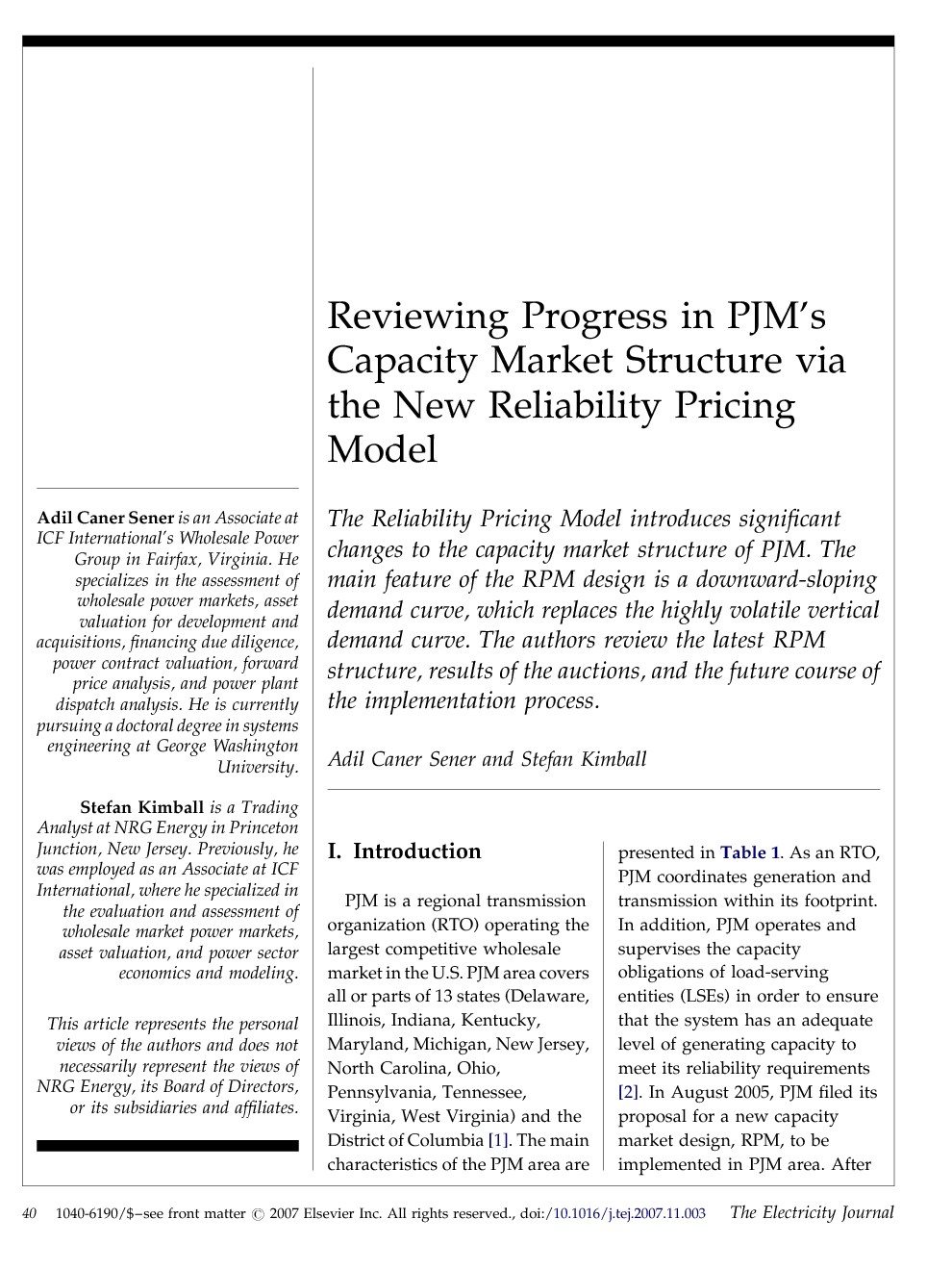 PJM is a regional transmission organization (RTO) operating the largest competitive wholesale market in the U.S. PJM area covers all or parts of 13 states (Delaware, Illinois, Indiana, Kentucky, Maryland, Michigan, New Jersey, North Carolina, Ohio, Pennsylvania, Tennessee, Virginia, West Virginia) and the District of Columbia [1]. The main characteristics of the PJM area are presented in Table 1. As an RTO, PJM coordinates generation and transmission within its footprint. In addition, PJM operates and supervises the capacity obligations of load-serving entities (LSEs) in order to ensure that the system has an adequate level of generating capacity to meet its reliability requirements [2]. In August 2005, PJM filed its proposal for a new capacity market design, RPM, to be implemented in PJM area. After several modifications to the original RPM proposal, the Federal Energy Regulatory Commission (FERC) approved PJM's RPM application in December 2006 [3]. The RPM design suggests significant changes in the capacity market structure of the PJM. RPM replaced PJM's old capacity construct on June 1, 2007. Table 1. PJM Area Characteristics Population 51 million Generating capacity 164,905 MW Peak demand 144,644 MW Annual energy delivery 729,000 GWh Source: PJM Web site. Table options According to the PJM Reliability Assurance Agreement (RAA), PJM LSEs are required to procure capacity resources on an unforced capacity basis at one times the forecast pool requirement above their peak load [4]. Capacity resources could have been acquired through bilateral agreements or through the PJM-operated capacity market. In its FERC filing PJM asserted that the old capacity construct had three main flaws [5]. 1. Lack of locational element: Although the system's transmission capacity varies by location, the capacity price was same across the PJM footprint. This situation resulted in improper allocation of capacity resources within PJM region, as excess capacity in the west was socialized throughout the constrained portions of the system. 2. Capacity price volatility due to vertical demand curve: Under the capacity credit market structure, the cost of a new peaker unit was assessed as a capacity deficiency charge if the LSE was short of its reserve margin requirement. If there was a surplus of even a few megawatts of capacity, then the capacity price would drop to zero. This situation created highly volatile capacity prices, which are oversensitive to capacity resource availability. 3. Short-term commitment of the capacity resources: The previous reliability structure allowed capacity resources to be devoted as short as one day. In addition, capacity resource suppliers could withdraw their resources with 36 hours’ notice. These features were in conflict with the reliability preservation efforts in the system. In its April 20, 2005 order FERC stated that “PJM's existing capacity construct is unjust and unreasonable” [2]. In the same order the FERC also found some aspects of the PJM's RPM proposal, namely “locational capacity requirements; a four-year-forward procurement auction; a downward-sloping demand curve, integration of generation, demand response and transmission; and the proposal for treatment of quickstart and load-following generation” [2], to be just and reasonable. The RPM mechanism addresses the three reliability concerns mentioned above as well as some others such as market power mitigation, quick-start, demand response, and transmission participation. In addition, it guarantees that new peaking capacity will be built in equilibrium by solving the “missing money” problem.

PJM's RPM approach is an attempt to create an artificial demand curve in absence of actual demand response for capacity. Compared to its predecessor, the vertically drawn demand curve, RPM is a more advanced capacity market design. It should be expected that capacity market participation of generation resources and demand response will increase under RPM construct, all other things equal, due to the large increase in prices and the large decrease in price volatility. Looking at the results of three auctions, it is also possible to say RPM has produced reasonable price signals for market players. For example, SWMAAC capacity prices have increased in the second and third auctions as a result of a higher increase in load growth than supply capacity growth [33]. Increased CETL limits moderated prices in EMAAC, driving down prices in that LDA in 2008–09. There was also some response from generators. According to the PJM, the 2008–09 auction attracted 500 MW of new additional demand response and 2,300 MW of existing generation capacity, which otherwise would be retired or mothballed [33]. Future auctions will be affected by additional changes to CETL and CETO values (Table 3) that govern transmission. In the long term, RPM can stabilize the PJM markets by adding the necessary amount of generation and slowing down retirements. However, the question of when and at what price levels generators can be expected to embark on a new round of peaker construction remains unresolved. In the constrained LDAs, total cleared internal resources have not always been sufficient to meet the threshold requirements, and prices have remained high. Backward-looking energy revenue and CONE calculations may result in a mis-estimation of net CONE. The RPM construct is open to mismatch between the parameterization of the demand curve, and generator expectations. At $19 to $21/kW-yr, estimated NRO in the constrained LDAs is quite high and possibly not reflective of near-term market conditions. Also, CONE is based on recent historical data points and does not reflect future cost expectations. The financing assumptions used to set CONE could differ from those of potential builders. Together, in the future, these factors may contribute to persistent solutions away from Point 2, requiring redrawing of the curve. Uncertainty regarding future capacity prices represents another disincentive to add new resources. While PJM allows new units to recoup their capacity investment over a period of several years, in the longer term generators cannot be certain that future capacity prices will guarantee a return on investment.