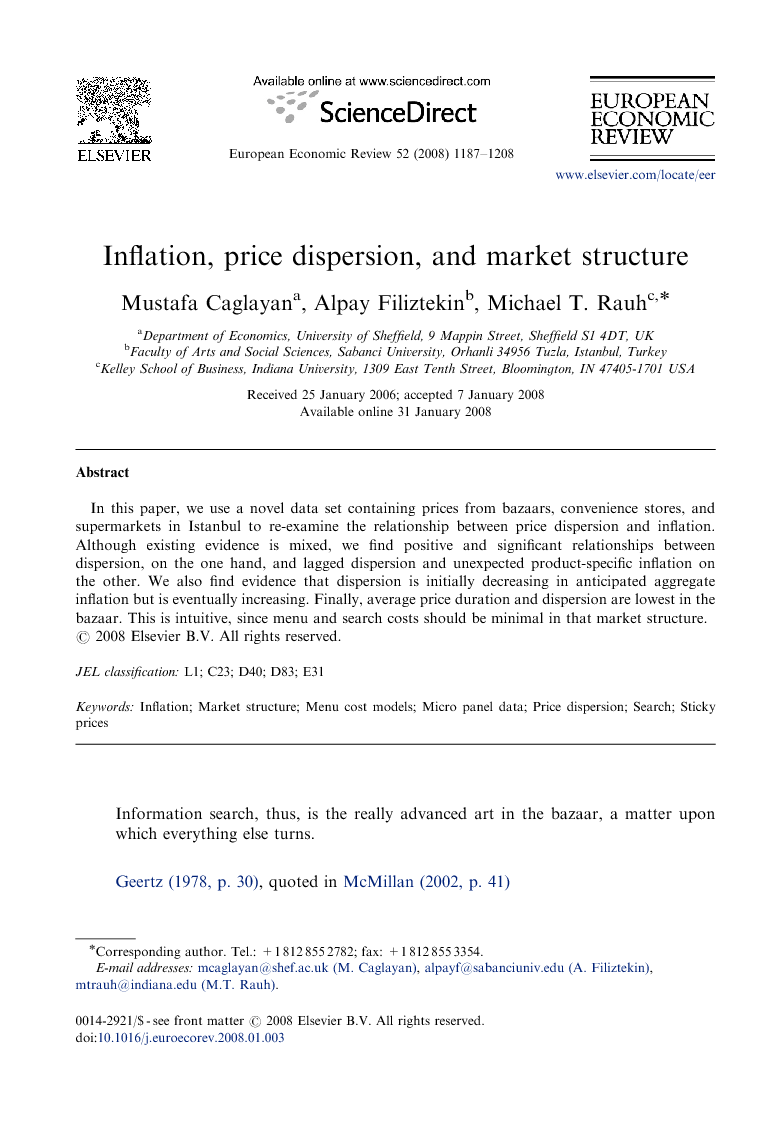 In this paper, we use a novel data set containing prices from bazaars, convenience stores, and supermarkets in Istanbul to re-examine the relationship between price dispersion and inflation. Although existing evidence is mixed, we find positive and significant relationships between dispersion, on the one hand, and lagged dispersion and unexpected product-specific inflation on the other. We also find evidence that dispersion is initially decreasing in anticipated aggregate inflation but is eventually increasing. Finally, average price duration and dispersion are lowest in the bazaar. This is intuitive, since menu and search costs should be minimal in that market structure.

In this paper, we use a unique data set containing monthly price observations from individual sellers in Istanbul to explore several major issues in the literatures on search, sticky prices, and the relationship between inflation and price dispersion. A novel feature of the data is that it includes prices from three distinct market structures: Bakkals (small convenience stores), pazars (bazaars), and Western-style supermarkets, which should exhibit significant differences in terms of menu costs, search costs, and other important parameters identified by the relevant theoretical literatures. We first investigate the frequency of price changes in the three different market structures, which we calculate according to the methodology in Bils and Klenow (2004). Since pazars contain a relatively large number of small sellers in a small geographical area, search and menu costs should be lower than in the other two market structures. According to the menu cost literature, including Sheshinski and Weiss (1977) and Bénabou, 1988 and Bénabou, 1992, prices should therefore turn over more quickly in the pazar, which is indeed what we find. Interestingly, we find that prices change more rapidly in supermarkets than in bakkals, and almost as fast as in pazars. A potential explanation, drawing on the recent literature on rational inattention, including Sims (2003) and Maćkowiak and Wiederholt (2005), is that supermarkets are relatively more sophisticated than the other two store types and hence may be able to track and react more quickly to changes in the economic environment. Our findings therefore suggest a role for both menu cost and rational inattention models in explaining observed price durations across distinct market structures. We then turn to the empirical literature on the relationship between inflation and price dispersion, which includes Domberger (1987), Van Hoomissen (1988), Lach and Tsiddon (1992), Tommasi (1993), Reinsdorf (1994), Parsley (1996), Eden (2001), Baharad and Eden (2004), and Ahlin and Shintani (2007).1 Overall, the existing evidence is mixed. Although several papers find a positive and significant relationship between inflation and dispersion, Reinsdorf (1994) finds a negative relationship driven by unanticipated inflation, while Eden (2001) and Baharad and Eden (2004) can discern no clear link. The theoretical literature on search, inflation, and price dispersion consists of menu cost models—Bénabou, 1988 and Bénabou, 1992; signal extraction models—Bénabou and Gertner (1993) and Dana (1994); monetary search models—Peterson and Shi (2004) and Head and Kumar (2005); and the information investment model sketched in Van Hoomissen (1988). As our brief survey of this literature indicates (see Section 2), inflation plays very different roles across the different classes of models. Specifically, in menu cost and monetary search models inflation is assumed to be fully anticipated and its initial impact is to depreciate the real purchasing power of firms’ revenues or buyers’ fiat money, respectively. In contrast, signal extraction models focus on unanticipated inflation, whose effects are primarily informational. In practice, empirical researchers usually have access to more than one inflation rate 2 and the theory offers little guidance as to which one(s) are appropriate for hypothesis testing. Indeed, it may well be that the distinct roles played by inflation in the different classes of theoretical models are distributed across different observed inflation measures, so that price dispersion has different empirical relationships with different inflation measures. In this paper, we estimate an empirical specification of the relationship between inflation and dispersion that includes both product-specific (PS) inflation (inflation at the product level), as well as a measure of aggregate inflation based on a broad cost-of-living (COL) index specific to Istanbul. Since menu cost and monetary search models assume fully anticipated inflation, whereas signal extraction models focus on unanticipated inflation, we decompose these two inflation rates into their expected and unexpected components. We also include lagged dispersion since the information investment model in Van Hoomissen (1988) suggests that current dispersion should be positively related to the former, since it reflects consumers’ pre-search stock of information. Finally, we control for product, store-type, and temporal fixed effects. The store-type fixed effects are of particular interest, since they indicate the average level of dispersion in each market structure after controlling for the product, inflation, and temporal factors. These estimates therefore correspond to dispersion in static equilibrium search models such as Reinganum (1979), Burdett and Judd (1983), Carlson and McAfee (1983), Rob (1985), Bénabou (1993), and Rauh (2007), where dispersion can exist for homogeneous goods in the absence of inflation. For a survey of this literature, see Baye et al. (2006). Our estimates imply that on average dispersion is lowest in pazars, followed by bakkals, and then supermarkets. The finding that dispersion is lowest in the pazar is quite natural, since search costs should be minimal in that market structure. With respect to the other estimates, the coefficient on lagged dispersion is positive and significant, so dispersion is decreasing in consumers’ pre-search stock of information. Although unexpected COL inflation is insignificant, the coefficient for unexpected PS inflation is positive and significant. These findings support the basic prediction of signal extraction models, provided that the latter are interpreted in terms of narrow PS inflation. Finally, expected PS inflation is insignificant but we find evidence that dispersion initially decreases with expected COL inflation but eventually rises, as predicted by the monetary search model in Head and Kumar (2005). At a broader level, our findings suggest that dispersion can indeed have different relationships with different inflation measures. The rest of the paper is organized as follows. In Section 2, we briefly survey the theoretical literature on inflation and dispersion. In Section 3, we describe the data, define the relevant dependent and independent variables, and present our findings on the frequency of price changes in the three distinct market structures. In Section 4, we estimate our specification of the relationship between inflation and price dispersion. Section 5 concludes.

In this paper, we explored a novel data set containing prices from individual sellers in pazars, bakkals, and supermarkets, which should exhibit significant variation in terms of menu costs, search costs, and other important parameters emphasized in the theoretical literature. Following the methodology in Bils and Klenow (2004), we found that average price duration is lowest in pazars, followed by supermarkets, then bakkals. The finding that prices turn over more rapidly in pazars is consistent with the basic predictions of menu cost models, since search and menu costs should be minimal in that market structure. We also found that prices change more frequently in supermarkets than in bakkals, and almost as quickly as in pazars. A potential explanation is that supermarkets have superior information-processing capabilities than bakkals, as emphasized by the literature on rational inattention. We conclude that both menu cost and rational inattention models are useful for understanding differences in average price duration across distinct market structures in our data. We then used our data to re-examine the relationship between inflation and dispersion, where recent evidence has been mixed. Unlike the existing literature, we included lagged dispersion in our specification to reflect consumers’ pre-search stock of information as in the information investment model in Van Hoomissen (1988). Another important difference with the existing literature was our inclusion of two different inflation measures, narrow PS inflation and aggregate COL inflation, decomposed into their expected and unexpected components. This was motivated by our observation that inflation plays highly distinct roles in the different classes of theoretical models, which suggests that different inflation measures might capture separate theoretical effects of inflation. In that case, dispersion could have different empirical relationships with different inflation measures. Finally, we controlled for product, store-type, and temporal fixed effects. The store-type fixed effects reveal the average degree of dispersion in each market structure after controlling for product heterogeneity, inflation, and other factors. These effects therefore correspond to dispersion in static equilibrium search models, which assume homogeneous products and zero inflation. According to our estimates, dispersion is on average highest for supermarkets, followed by bakkals, then pazars. The finding that dispersion is lowest in the pazar is consistent with the basic predictions of static equilibrium search models, since search costs should be minimal in that market structure. We also found a positive and significant relationship between dispersion and lagged dispersion, so the former is decreasing in consumers’ pre-search stock of information. In accordance with the basic prediction of signal extraction models, we found a symmetric V-shaped relationship between dispersion and unexpected PS inflation. Furthermore, there is some evidence that the relationship between dispersion and expected COL inflation is V-shaped, where the vertex occurs at a positive level of anticipated aggregate inflation, as predicted by the monetary search model in Head and Kumar (2005). Finally, expected PS and unexpected COL inflation were both insignificant. From an empirical standpoint, a major conclusion of the paper is that price dispersion can indeed have different relationships with different inflation measures. Furthermore, our findings suggest that the Head–Kumar monetary search model will play an important role in future empirical work. At the theoretical level, we found that the information investment model, monetary search models, and signal extraction models all contribute to our understanding of the relationship between inflation and dispersion in our data. Our results therefore highlight the need for an integrated theory of that relationship to unify these separate insights within a single theoretical framework.