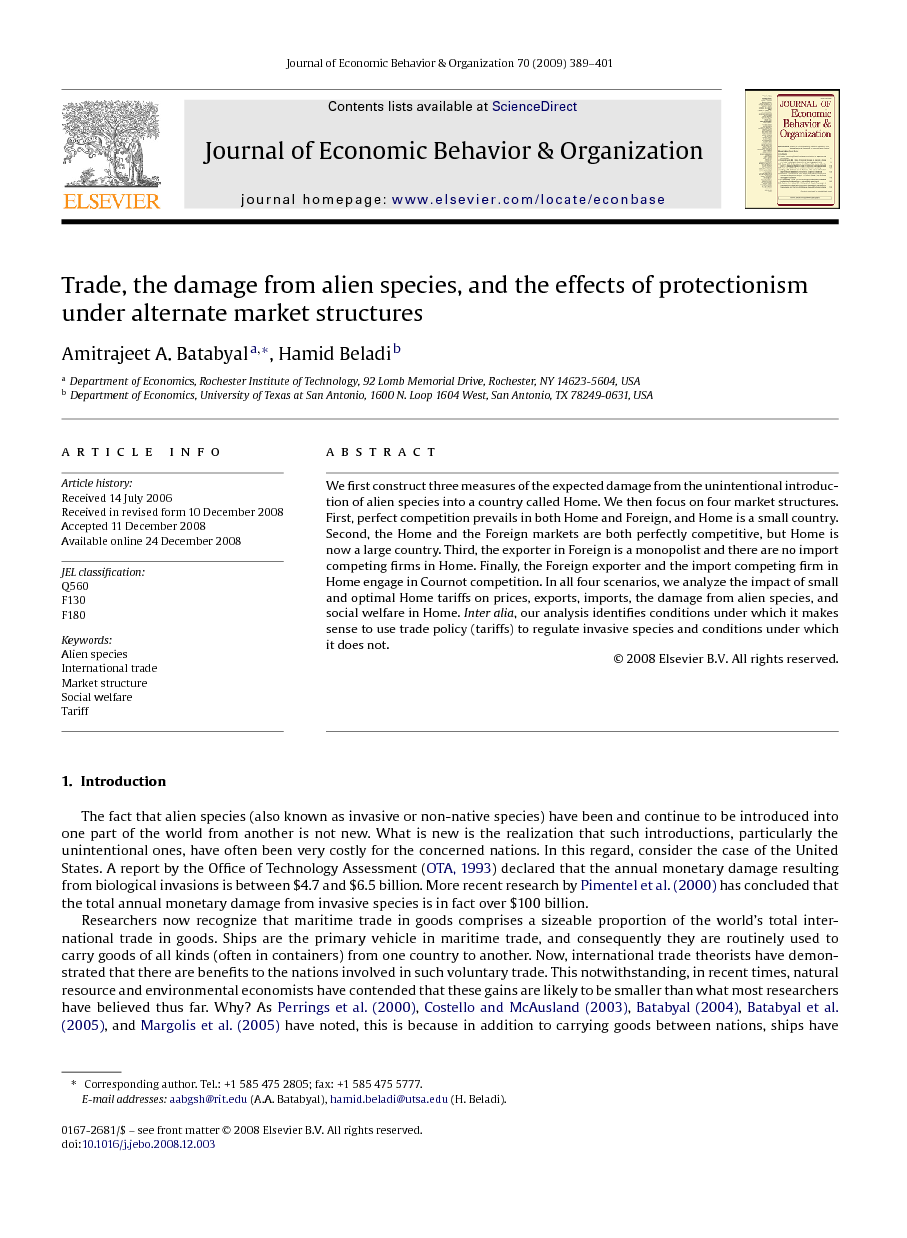 We first construct three measures of the expected damage from the unintentional introduction of alien species into a country called Home. We then focus on four market structures. First, perfect competition prevails in both Home and Foreign, and Home is a small country. Second, the Home and the Foreign markets are both perfectly competitive, but Home is now a large country. Third, the exporter in Foreign is a monopolist and there are no import competing firms in Home. Finally, the Foreign exporter and the import competing firm in Home engage in Cournot competition. In all four scenarios, we analyze the impact of small and optimal Home tariffs on prices, exports, imports, the damage from alien species, and social welfare in Home. Inter alia, our analysis identifies conditions under which it makes sense to use trade policy (tariffs) to regulate invasive species and conditions under which it does not.

In this paper, we provided a theoretical perspective on the impacts of small and optimal specific tariffs when international trade in goods results in the stochastic introductions of alien species from one country to another as a byproduct. Conducting the analysis from the standpoint of the tariff imposing country (i.e., Home), we first derived three (two monetary and one physical) measures of the expected total damage from alien species introductions into Home. Next, we analyzed the effects of small and optimal tariffs under four alternate market structures. Our basic result is that there are several circumstances in which it makes sense to use trade policy (tariffs) to control the damage from alien plant and/or animal species. The analysis in this paper can be extended in a number of directions. In what follows, we suggest two possible extensions of this paper's research. First, in our model the rate of alien species introductions depends only on the volume of imports. Therefore, it would be useful to determine the extent to which one can obtain results from a model in which, in addition to the volume of imports, the rate of species introductions depends also on the number of previously successful introductions. Second, it would be useful to analyze the impacts of import quotas to see if our basic result from the previous paragraph also holds in the case of quotas. Studies of alien species management that incorporate these aspects of the problem into the analysis will provide additional insights into a management problem that has considerable economic and ecological implications.