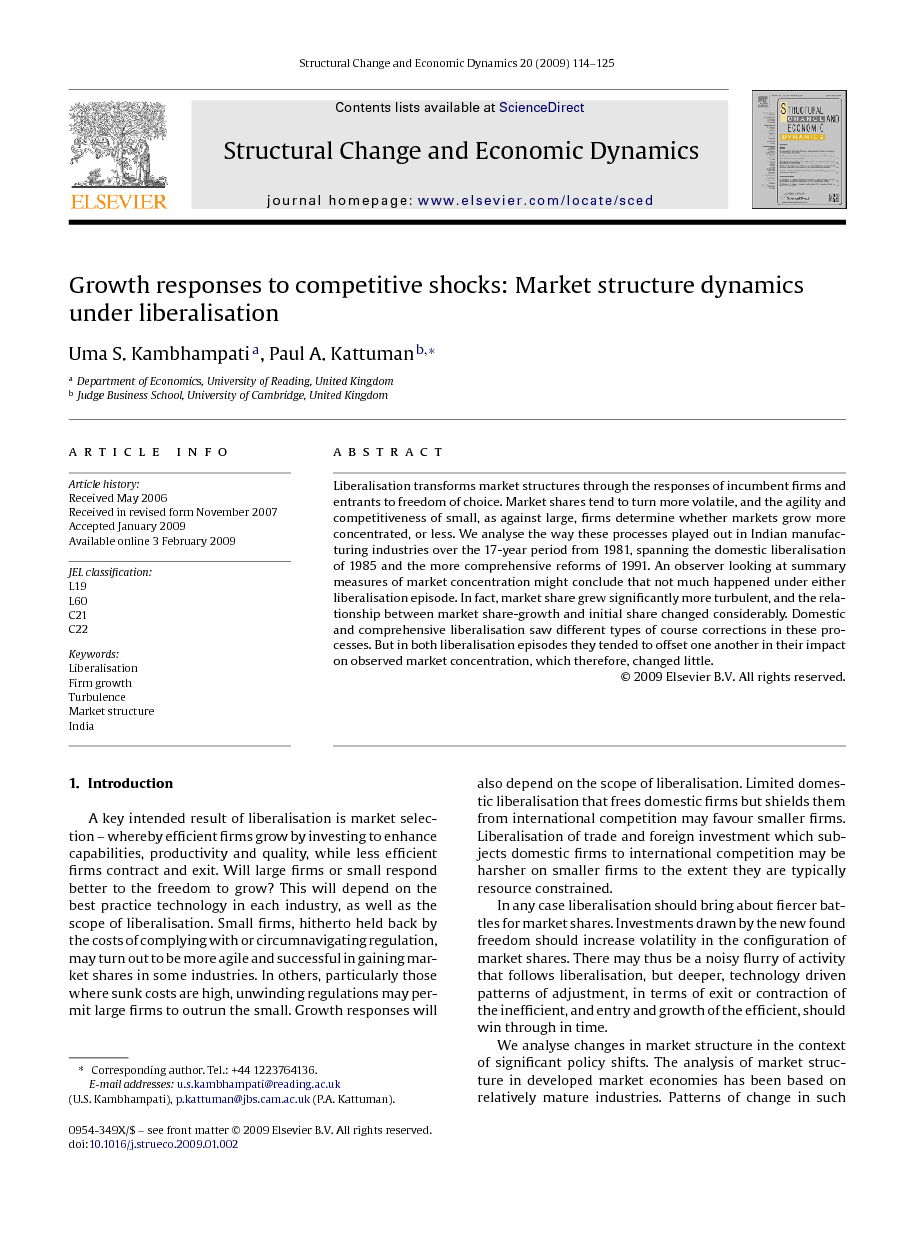 Liberalisation transforms market structures through the responses of incumbent firms and entrants to freedom of choice. Market shares tend to turn more volatile, and the agility and competitiveness of small, as against large, firms determine whether markets grow more concentrated, or less. We analyse the way these processes played out in Indian manufacturing industries over the 17-year period from 1981, spanning the domestic liberalisation of 1985 and the more comprehensive reforms of 1991. An observer looking at summary measures of market concentration might conclude that not much happened under either liberalisation episode. In fact, market share grew significantly more turbulent, and the relationship between market share-growth and initial share changed considerably. Domestic and comprehensive liberalisation saw different types of course corrections in these processes. But in both liberalisation episodes they tended to offset one another in their impact on observed market concentration, which therefore, changed little.

A key intended result of liberalisation is market selection – whereby efficient firms grow by investing to enhance capabilities, productivity and quality, while less efficient firms contract and exit. Will large firms or small respond better to the freedom to grow? This will depend on the best practice technology in each industry, as well as the scope of liberalisation. Small firms, hitherto held back by the costs of complying with or circumnavigating regulation, may turn out to be more agile and successful in gaining market shares in some industries. In others, particularly those where sunk costs are high, unwinding regulations may permit large firms to outrun the small. Growth responses will also depend on the scope of liberalisation. Limited domestic liberalisation that frees domestic firms but shields them from international competition may favour smaller firms. Liberalisation of trade and foreign investment which subjects domestic firms to international competition may be harsher on smaller firms to the extent they are typically resource constrained. In any case liberalisation should bring about fiercer battles for market shares. Investments drawn by the new found freedom should increase volatility in the configuration of market shares. There may thus be a noisy flurry of activity that follows liberalisation, but deeper, technology driven patterns of adjustment, in terms of exit or contraction of the inefficient, and entry and growth of the efficient, should win through in time. We analyse changes in market structure in the context of significant policy shifts. The analysis of market structure in developed market economies has been based on relatively mature industries. Patterns of change in such industries are likely to be different from those in dynamic and fast growing industries in transitional economies. Against this setting, we show that changes in market structure that appear sluggish may mask acute but offsetting changes in constituent economic processes. This follows from a decomposition of market concentration change into two components – one due to turbulence (mobility of firms’ market shares) and another due to the relationship between initial market share and its change. Our decomposition extends an earlier one by Davies and Geroski (1997), and pins down the joint evolution of market share turbulence and market share-growth for a full distribution indicator of concentration – the Hirschman-Herfindahl Index. Our analysis engages with the tension between the Chandlerian (market leadership tends to persist) and the Schumpeterian (leadership is transient) positions that has been noted by Sutton (2007) in his analysis of the persistence of leadership. These divergent forces are drivers of market structure dynamics ‘…Changes in concentration occur slowly with high or low levels of concentration persisting for relatively long periods of time. On the other hand, …[it is common to find]…large changes of shares…sometimes occur over short periods of time among the group of leading firms.” (Davies and Geroski, 1997, p. 383). The intuition is obvious: when market shares of firms change, some of the changes offset each other in the calculation of concentration, for example, if firms trade places in share rankings. This will leave market concentration unchanged in spite of significant mobility within the industry. Which aspect captures the true picture of competitive rivalry?1 Liberalisation episodes, when competitive rivalry increases, are suitable contexts to revisit this question. Using data from an interesting period in India, we use a simple decomposition to examine how changes in market concentration were determined: on the one hand, by market share turbulence, and on the other, by the degree to which large (or small) firms gained market shares systematically. We examine these distinct elements of market structure change in the context of two reform episodes. The first, dated 1985–1986, involved limited domestic reforms. In contrast, the reforms of 1991 were far reaching and encompassed substantial opening up to the international economy. We look at the growth market shares of medium and large firms in a set of 83 manufacturing industries (SIC 3 digit level) over the period 1981–1997, and examine the impact of the different types of shocks to the business environment in 1985–1986 and 1991. The main features of the two phases of liberalisation are outlined in the next section. In Section 3 we set out a framework for our analysis and review issues in market structure dynamics. Section 4 describes the data and provides a preliminary characterisation of the variables of interest. Section 5 sets out our econometric model. The results are discussed in Section 6, with an assessment of the dynamics of the components of market structure change, in relation to each other and to their total. Section 7 concludes.

To depict an overall summary we computed the predicted conditional mean values using coefficients in Table 1. Fig. 3 presents predicted SGRT and MOB, and compares them with the change in HHI that arises from these predictions. SGRT and MOB have very pronounced dynamic patterns, but they offset each other; as a result, annual changes in HHI are very small. Full-size image (41 K) Fig. 3. Trends in conditional means of concentration, share growth and mobility. Figure options An observer looking only at HHI and its change might have concluded that little of import happened with either episode of liberalisation. In fact, much did happen. Prior to 1985, larger firms were growing faster (SGRT was rising) and market share volatility (MOB) was in decline in India. The directions of SGRT and MOB were reversed in the domestic liberalisation phase after 1985 – SGRT began to drop and MOB to rise; suggesting that smaller firms were more able to respond to opportunities in an environment that was partially protected. These trends were reversed again in the comprehensive liberalisation phase after 1991: SGRT rose and MOB fell, suggesting that larger firms fared better than the smaller in the more competitive and turbulent environment of the 1990s. These findings point to the value of a shift in methodology in market structure studies towards a consideration of the constituent elements of changes in concentration with richer, full distribution data sets.