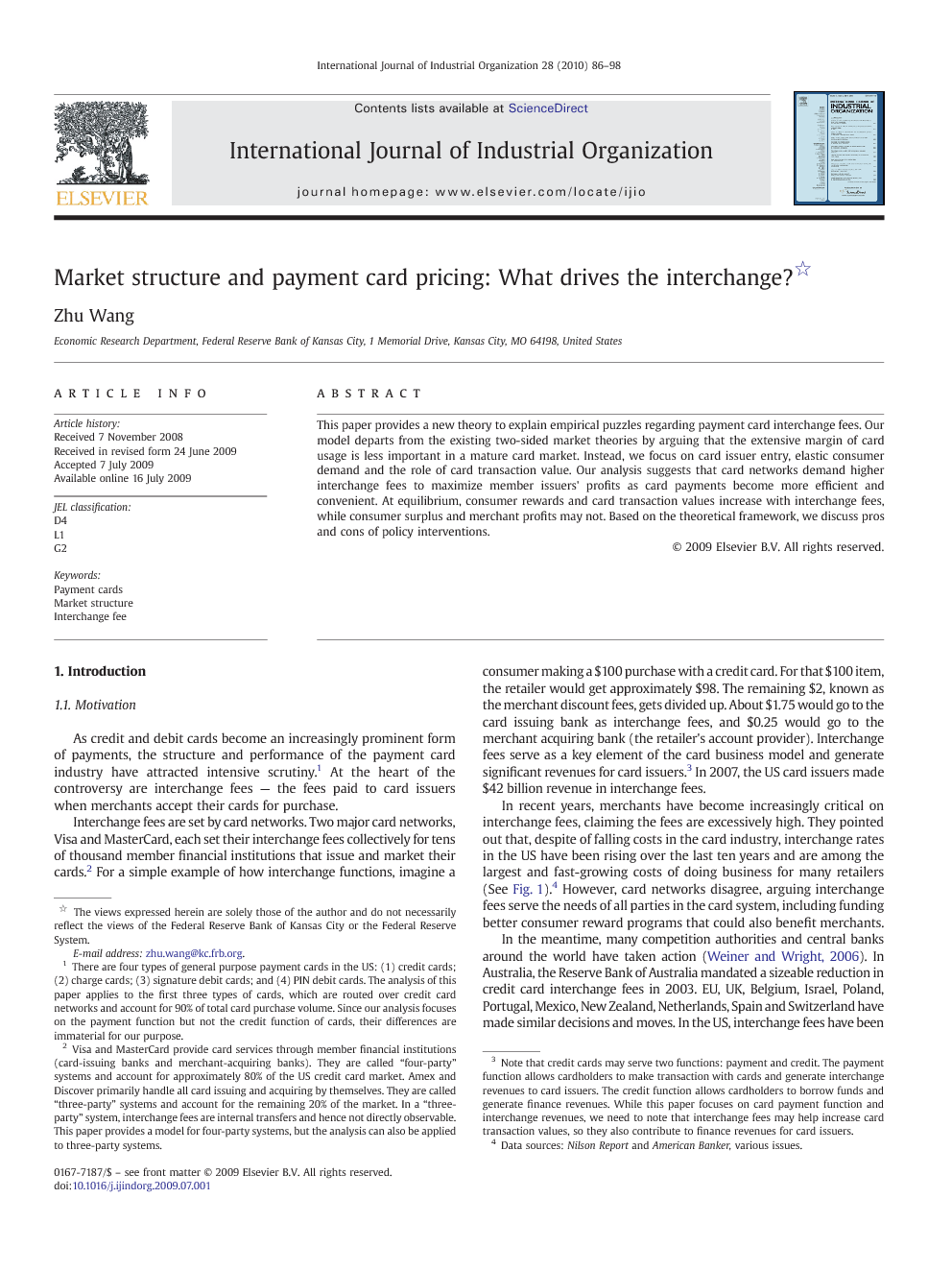 This paper provides a new theory to explain empirical puzzles regarding payment card interchange fees. Our model departs from the existing two-sided market theories by arguing that the extensive margin of card usage is less important in a mature card market. Instead, we focus on card issuer entry, elastic consumer demand and the role of card transaction value. Our analysis suggests that card networks demand higher interchange fees to maximize member issuers' profits as card payments become more efficient and convenient. At equilibrium, consumer rewards and card transaction values increase with interchange fees, while consumer surplus and merchant profits may not. Based on the theoretical framework, we discuss pros and cons of policy interventions.

As credit and debit cards become an increasingly prominent form of payments, the structure and performance of the payment card industry have attracted intensive scrutiny.1 At the heart of the controversy are interchange fees — the fees paid to card issuers when merchants accept their cards for purchase. Interchange fees are set by card networks. Two major card networks, Visa and MasterCard, each set their interchange fees collectively for tens of thousand member financial institutions that issue and market their cards.2 For a simple example of how interchange functions, imagine a consumer making a $100 purchase with a credit card. For that $100 item, the retailer would get approximately $98. The remaining $2, known as the merchant discount fees, gets divided up. About $1.75 would go to the card issuing bank as interchange fees, and $0.25 would go to the merchant acquiring bank (the retailer's account provider). Interchange fees serve as a key element of the card business model and generate significant revenues for card issuers.3 In 2007, the US card issuers made $42 billion revenue in interchange fees. In recent years, merchants have become increasingly critical on interchange fees, claiming the fees are excessively high. They pointed out that, despite of falling costs in the card industry, interchange rates in the US have been rising over the last ten years and are among the largest and fast-growing costs of doing business for many retailers (See Fig. 1).4 However, card networks disagree, arguing interchange fees serve the needs of all parties in the card system, including funding better consumer reward programs that could also benefit merchants. Full-size image (24 K) Fig. 1. Credit card interchange fees (IFs) and transaction values in the US. Figure options In the meantime, many competition authorities and central banks around the world have taken action (Weiner and Wright, 2006). In Australia, the Reserve Bank of Australia mandated a sizeable reduction in credit card interchange fees in 2003. EU, UK, Belgium, Israel, Poland, Portugal, Mexico, New Zealand, Netherlands, Spain and Switzerland have made similar decisions and moves. In the US, interchange fees have been mainly challenged by private litigation. Since 2005, more than 50 antitrust cases have been filed by merchants contesting interchange fees. The performance of the card industry raises following challenging questions: • Why have interchange fees been increasing given falling costs and increased competition in the card industry?5 Full-size image (51 K) Fig. 2. Credit card industry trends: costs and competition. Figure options • Given the rising interchange fees, why can't merchants refuse to accept cards? Why have total card transaction values been growing rapidly? • What are the causes and consequences of increasing consumer card rewards? • What are the choices and consequences of policy interventions? In order to answer these questions, a growing literature on payment card markets has been developed recently.6 These models, following the pioneering work of Baxter (1983), emphasize two-sided market externalities in card payment systems.7 For example, Rochet and Tirole (2002) consider strategic interactions of consumers and merchants. In their model, two identical Hotelling merchants make card acceptance decisions to compete for consumers who have fixed demand for goods but heterogeneous benefits from using cards. Wright (2004) extends the framework by considering heterogenous merchants who receive different benefits from accepting cards. These models show that merchant card acceptance and consumer card usage depend on each other, and card networks need to set card fees to balance the demand on the two sides of the market. However, because these analyses rely on the distribution of merchant and consumer card benefits as well as the strategic competition among merchants, the results are less conclusive in terms of evaluating card market performance and explaining stylized facts (Katz, 2001, Hunt, 2003, Rochet, 2003 and Rochet and Tirole, 2006).

As credit and debit cards become an increasingly prominent form of payments, the structure and performance of the payment card industry have attracted intensive scrutiny. This paper presents an industry equilibrium model to better understand this market. Our model takes a different approach from the existing two-sided market literature. First, we model a mature card market where the extensive margin of card usage is less important. Second, we relax many restrictive assumptions in previous studies by assuming competitive merchants, free entry and exit of heterogenous issuers, oligopolistic card networks, and allowing for elastic consumer demand. The new model offers a more realistic and arguably better framework, which views the card industry as a vertical control system with monopolistic networks on top of price taking intermediates and end users. Card networks set interchange fees to boost the card transaction value and compete against alternative payment instruments. As card payments become more efficient and convenient, card networks then raise interchange fees to extract efficiency gains out of the system. At equilibrium, consumer rewards and total card transaction values increase with interchange fees, but consumer surplus and merchant profits may not improve. Based on the theoretical framework, the pros and cons of policy interventions are discussed.