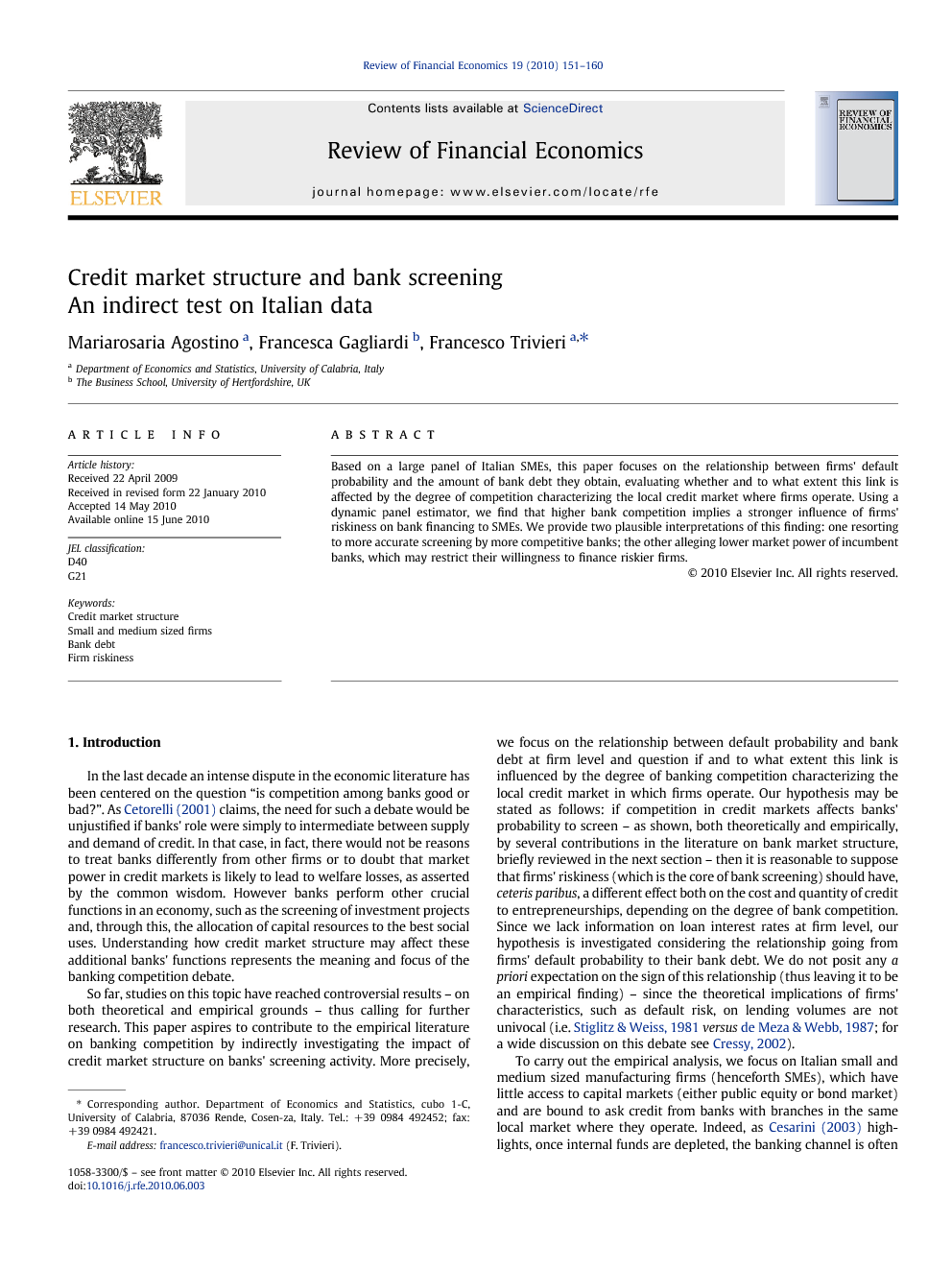 Based on a large panel of Italian SMEs, this paper focuses on the relationship between firms' default probability and the amount of bank debt they obtain, evaluating whether and to what extent this link is affected by the degree of competition characterizing the local credit market where firms operate. Using a dynamic panel estimator, we find that higher bank competition implies a stronger influence of firms' riskiness on bank financing to SMEs. We provide two plausible interpretations of this finding: one resorting to more accurate screening by more competitive banks; the other alleging lower market power of incumbent banks, which may restrict their willingness to finance riskier firms.

This paper has been concerned with the role of credit market structure on banks' screening activity, a topic disputed in the literature. We have dealt with this issue by empirically investigating whether and to what extent the link between a firm's default probability and the amount of bank debt it receives is affected by the degree of competition characterizing the local credit market where the firm operates. Our approach moves from the consideration that if competition in credit markets affects banks' probability to screen, as shown by the literature on bank market structure, then (ceteris paribus) the effect of firms' default probability on credit quantity to entrepreneurships should be different, depending on the degree of bank competition. The research has been conducted on a large panel of Italian SMEs for the period spanning the years from 1995 to 2003. Having focused on Italian SMEs is relevant since these firms have little access to capital markets and are bound to ask credit from banks with branches in the same local market where they operate. The methodology adopted to implement the analysis consisted in specifying a multiplicative interaction model, in which the impact of firms' riskiness profile on their usage of bank financing is made conditional on the level of local banking concentration. Moreover, both the role of firm-specific effects and the endogeneity of several determinants of bank debt have been taken into account. Our results suggest that in local credit markets where competition is more vigorous the influence of firms' riskiness on the amount of bank debt to small and medium entrepreneurships, as well as on firms' bank debt growth, is stronger. Since the relationship between firms' riskiness and bank debt is found negative, and ceteris paribus, bank financing appears to be lower for riskier SMEs running in more competitive credit markets. This evidence seems to be compatible with at least two explanations. On one hand, according to some contributions (i.e. Benfratello et al., 2006), competitive pressures might stimulate banks to perform more accurate borrowers' screening, so that credit market competition would be beneficial in raising banks' efficiency in funds allocation. On the other hand, regardless of screening activity (and in line with Petersen & Rajan, 1995 thesis), bank financing to riskier firms could be lower where credit competition is stronger because this latter might erode the market power of incumbent banks, thus reducing their incentives to finance higher riskier entrepreneurships. We have argued that both the above interpretations may be considered likewise plausible, and not necessarily conflicting with each other, as the conceptual mechanisms they subtend may jointly represent the source of our evidence. Nonetheless, to shed more light on the issue addressed in this paper, ongoing research is devoted to explore novel empirical strategies aimed at directly relating local credit market competition with both banks' incentives and ability to screen. From this research we also expect to draw some indications that may further corroborate the policy implication suggested by the results of the present paper, namely that the profound transformation process of the Italian banking industry – which started in the early 1990s and fostered competition in the sector (Angelini & Cetorelli, 2003) – might have improved funds allocation in the economy.