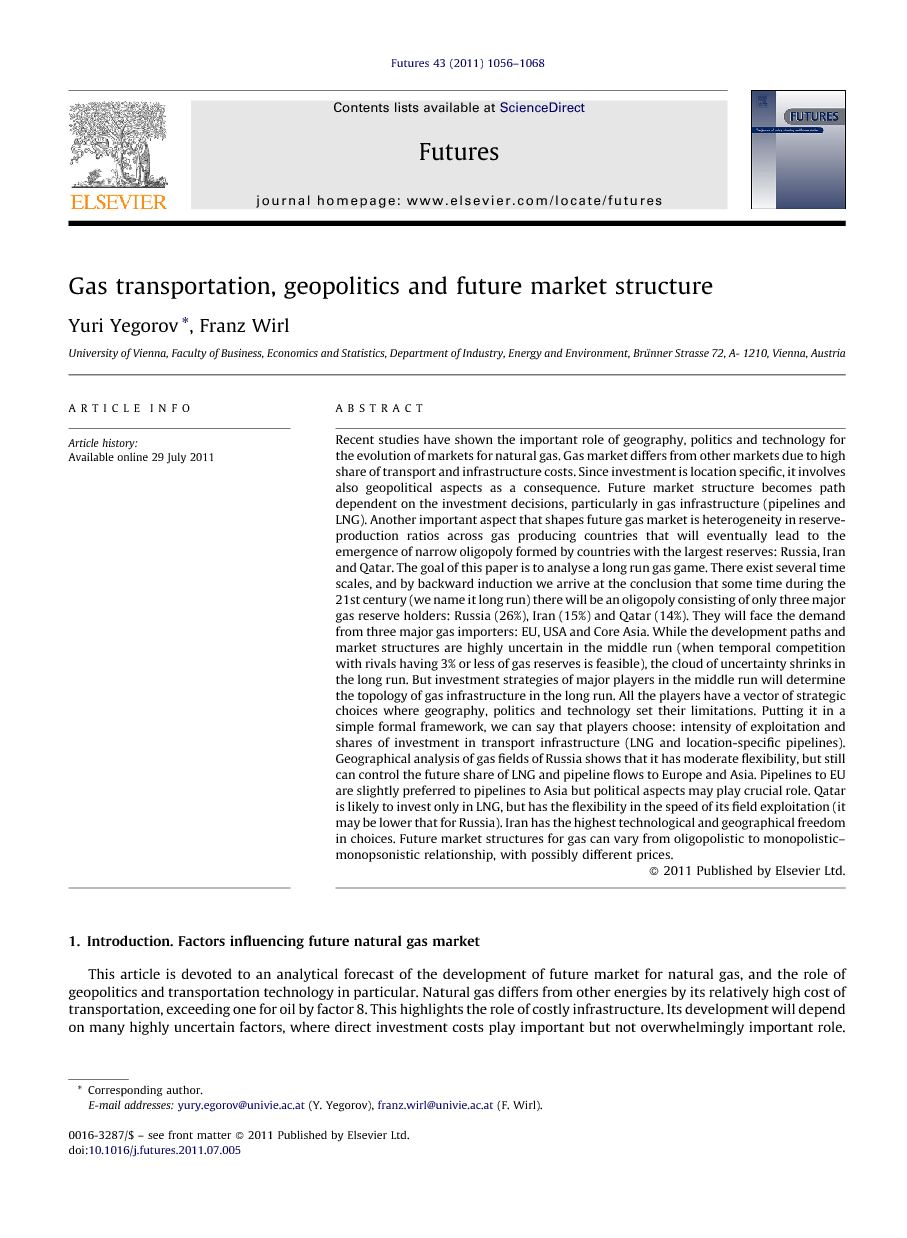 Recent studies have shown the important role of geography, politics and technology for the evolution of markets for natural gas. Gas market differs from other markets due to high share of transport and infrastructure costs. Since investment is location specific, it involves also geopolitical aspects as a consequence. Future market structure becomes path dependent on the investment decisions, particularly in gas infrastructure (pipelines and LNG). Another important aspect that shapes future gas market is heterogeneity in reserve-production ratios across gas producing countries that will eventually lead to the emergence of narrow oligopoly formed by countries with the largest reserves: Russia, Iran and Qatar. The goal of this paper is to analyse a long run gas game. There exist several time scales, and by backward induction we arrive at the conclusion that some time during the 21st century (we name it long run) there will be an oligopoly consisting of only three major gas reserve holders: Russia (26%), Iran (15%) and Qatar (14%). They will face the demand from three major gas importers: EU, USA and Core Asia. While the development paths and market structures are highly uncertain in the middle run (when temporal competition with rivals having 3% or less of gas reserves is feasible), the cloud of uncertainty shrinks in the long run. But investment strategies of major players in the middle run will determine the topology of gas infrastructure in the long run. All the players have a vector of strategic choices where geography, politics and technology set their limitations. Putting it in a simple formal framework, we can say that players choose: intensity of exploitation and shares of investment in transport infrastructure (LNG and location-specific pipelines). Geographical analysis of gas fields of Russia shows that it has moderate flexibility, but still can control the future share of LNG and pipeline flows to Europe and Asia. Pipelines to EU are slightly preferred to pipelines to Asia but political aspects may play crucial role. Qatar is likely to invest only in LNG, but has the flexibility in the speed of its field exploitation (it may be lower that for Russia). Iran has the highest technological and geographical freedom in choices. Future market structures for gas can vary from oligopolistic to monopolistic–monopsonistic relationship, with possibly different prices.

The principle of backward induction is crucial: You cannot predict the medium term without any idea about the ‘end game’, i.e., the long-term situation. The purpose of this paper is to fill this gap by focusing on the long run and on the shadow that this casts over the medium term. Inter alia our analysis suggests the following. Given that long run future gas market will have few large players under the ownership by sovereign states (thus beyond anti-trust laws), the incentives for cartel-like agreements are strong. Furthermore, the heavy investment into infrastructure may provide a commitment device to reduce ex-post competition leading possibly to almost monopolistic situations in regional markets. This degree of regional monopoly depends on the long-term share of LNG in gas trade since that can be used to enter the ‘home’ market of other suppliers. As a consequence, limiting LNG development by one or more of the crucial suppliers (in particular by Russia) can be a signal for a tacit cartel arrangement. In energy markets it is very hard to ignore politics, not only in the short and medium term when it is harming the Iranian aspirations, but also in the long run. For example all countries but in particular Iran and Russia face the obstacle of low domestic prices, which can even threaten long term export volumes. In the case of Qatar, its resource richness given its small population and its military impotence may attract some of its Arab or Muslim brothers to ‘annex’ it. Fortunately it is surrounded by resource rich Saudi Arabia but it may nevertheless receive protection by a global power; Russia because of cartel interest, US and China due to consumers interest. Conversely, consuming countries may re-consider their strategies. For example, an anti-global warming policy (based currently on an increase of the share of natural gas, since the only option to save CO2 permits is to run gas fired instead of coal fired power plants) may be reconsidered (pushing e.g. CCS, nuclear power and R&D in alternatives and renewable). On the other hand diversification will help today but at the cost of even less competitive future supplies by mid 21st century due to resource constraints. While it is difficult to forecast the details of gas markets 20–30 years from now, some policy issues can be derived from their long-term structure. If LNG becomes scarce, USA will submit higher bids compared with EU. If Russia builds LNG plants or Asian pipelines in earlier period, it is not optimal for it to increase gas sales to EU by building new pipelines in the long run. Thus, EU should have an economic interest to invest in pipelines to Russia in the middle run, to reduce Russian risk in energy demand and to reduce Russian incentive to invest more in Asian pipelines and LNG. By doing this, EU can improve its terms for gas supply in the long run. Future external shocks (like oil peak) and interaction between markets for different energies add complexity to forecast, making it more chaotic and fuzzy. Here we consider different scenarios for the timing of oil and gas production peaks. Due to technological possibility of substitution between oil and gas, we expect a smoothing of transition process and almost parallel growth of oil and gas prices in the middle run, making the current decline in the relative price of natural gas a temporal phenomenon. Non-conventional gas and oil can change the time horizons of peaks but are not likely to change the general structure of the forecast described in Section 4.