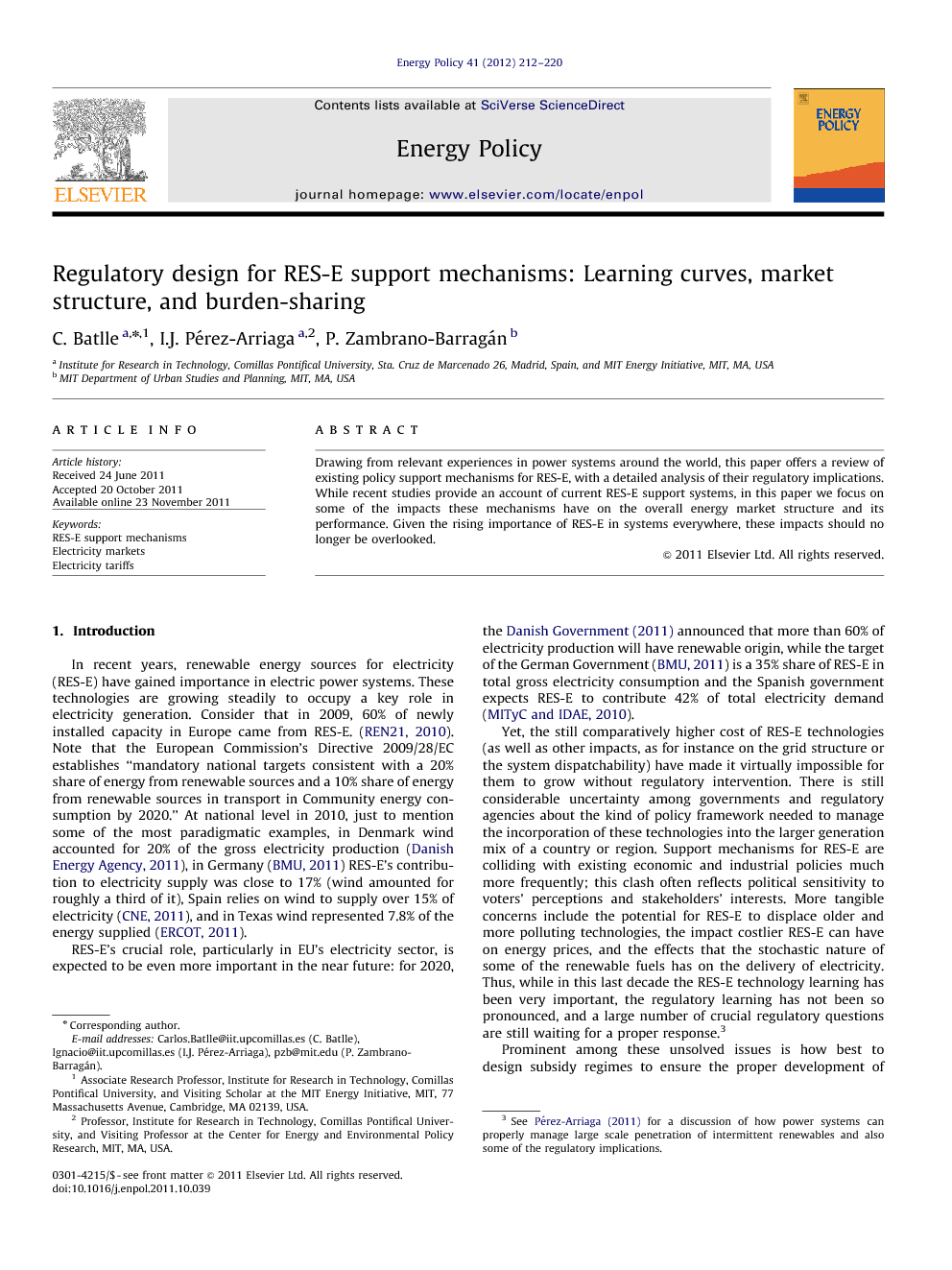 Drawing from relevant experiences in power systems around the world, this paper offers a review of existing policy support mechanisms for RES-E, with a detailed analysis of their regulatory implications. While recent studies provide an account of current RES-E support systems, in this paper we focus on some of the impacts these mechanisms have on the overall energy market structure and its performance. Given the rising importance of RES-E in systems everywhere, these impacts should no longer be overlooked.

In recent years, renewable energy sources for electricity (RES-E) have gained importance in electric power systems. These technologies are growing steadily to occupy a key role in electricity generation. Consider that in 2009, 60% of newly installed capacity in Europe came from RES-E. (REN21, 2010). Note that the European Commission's Directive 2009/28/EC establishes “mandatory national targets consistent with a 20% share of energy from renewable sources and a 10% share of energy from renewable sources in transport in Community energy consumption by 2020.” At national level in 2010, just to mention some of the most paradigmatic examples, in Denmark wind accounted for 20% of the gross electricity production (Danish Energy Agency, 2011), in Germany (BMU, 2011) RES-E's contribution to electricity supply was close to 17% (wind amounted for roughly a third of it), Spain relies on wind to supply over 15% of electricity (CNE, 2011), and in Texas wind represented 7.8% of the energy supplied (ERCOT, 2011). RES-E's crucial role, particularly in EU's electricity sector, is expected to be even more important in the near future: for 2020, the Danish Government (2011) announced that more than 60% of electricity production will have renewable origin, while the target of the German Government (BMU, 2011) is a 35% share of RES-E in total gross electricity consumption and the Spanish government expects RES-E to contribute 42% of total electricity demand (MITyC and IDAE, 2010). Yet, the still comparatively higher cost of RES-E technologies (as well as other impacts, as for instance on the grid structure or the system dispatchability) have made it virtually impossible for them to grow without regulatory intervention. There is still considerable uncertainty among governments and regulatory agencies about the kind of policy framework needed to manage the incorporation of these technologies into the larger generation mix of a country or region. Support mechanisms for RES-E are colliding with existing economic and industrial policies much more frequently; this clash often reflects political sensitivity to voters' perceptions and stakeholders' interests. More tangible concerns include the potential for RES-E to displace older and more polluting technologies, the impact costlier RES-E can have on energy prices, and the effects that the stochastic nature of some of the renewable fuels has on the delivery of electricity. Thus, while in this last decade the RES-E technology learning has been very important, the regulatory learning has not been so pronounced, and a large number of crucial regulatory questions are still waiting for a proper response.3 Prominent among these unsolved issues is how best to design subsidy regimes to ensure the proper development of RES-E. Currently, there are two different types of support methods: • Indirect methods, i.e. implicit payments or discounts as well as institutional support tools that include: research and development funding, below-cost provision of infrastructure or services (costs of technical adaptations such as shadow connection charging (Auer et al., 2009) or costs of imbalances and ancillary services in general),4 and positive discriminatory rules (such as regulations facilitating grid access for RES-E power, RES-E dispatch priority in the EU, and other: net metering, building codes, etc.). • Direct methods—these methods refer to investment supports, such as capital grants, tax exemptions or reductions on the purchase of goods and operating support mechanisms, i.e. price subsidies, obligations, tenders, and tax exemptions on production (Commission of the European Communities, 2008). Drawing from relevant experiences in power systems around the world, this paper offers a review of existing policy supports for RES-E, with a focus on direct methods. We provide a detailed review of the different schemes and design features implemented to date, keeping an analytical distinction between the two categories for direct methods: price-based supports, which fix the price to be paid for renewable electricity, and quantity-based supports, which determine a specific amount of electricity to be produced by RES-E. While recent studies provide an account of current RES-E support systems, in this paper we focus on the impacts that these mechanisms have on the overall energy market structure and its performance in the short- and long-term. Given the rising importance of RES-E in systems everywhere, these impacts can no longer be overlooked.