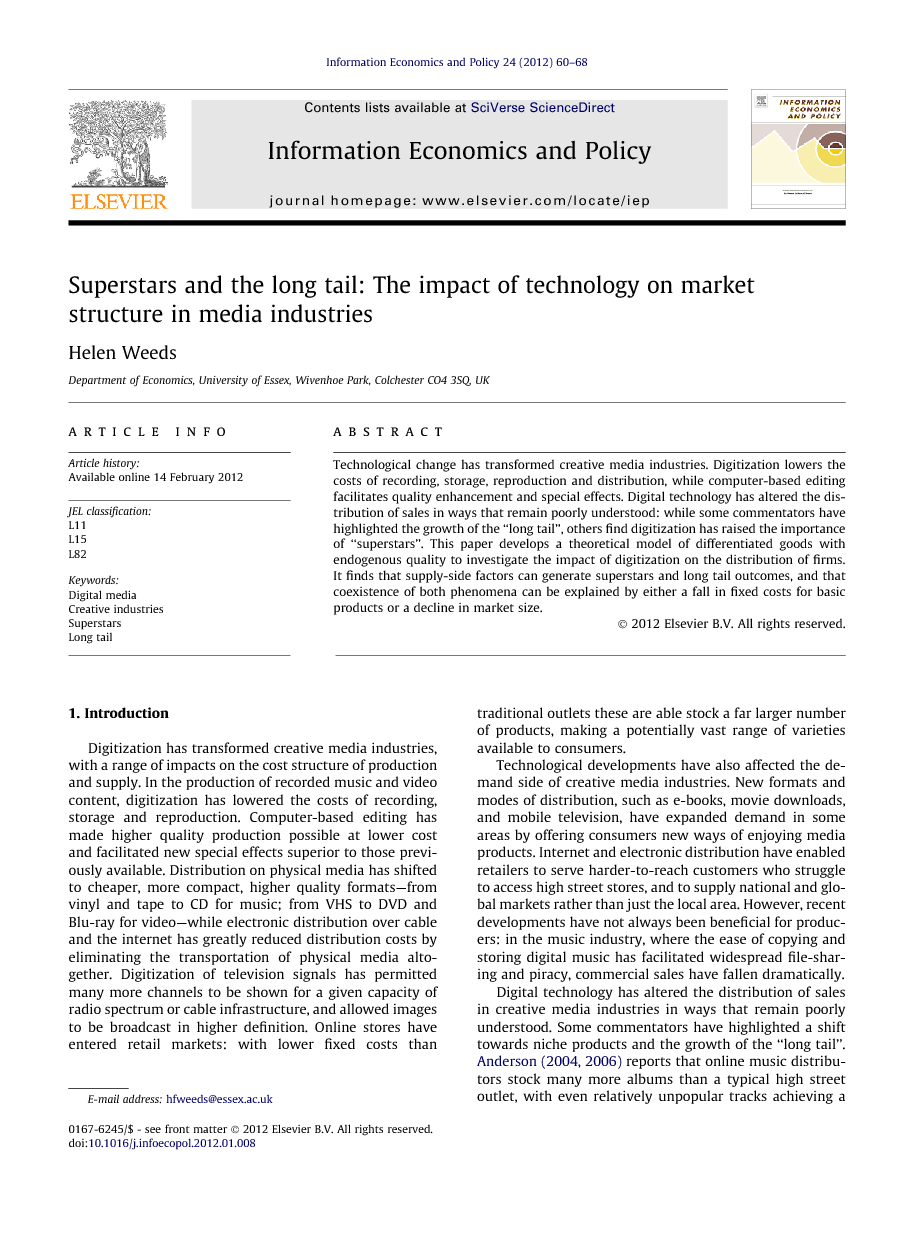 Technological change has transformed creative media industries. Digitization lowers the costs of recording, storage, reproduction and distribution, while computer-based editing facilitates quality enhancement and special effects. Digital technology has altered the distribution of sales in ways that remain poorly understood: while some commentators have highlighted the growth of the “long tail”, others find digitization has raised the importance of “superstars”. This paper develops a theoretical model of differentiated goods with endogenous quality to investigate the impact of digitization on the distribution of firms. It finds that supply-side factors can generate superstars and long tail outcomes, and that coexistence of both phenomena can be explained by either a fall in fixed costs for basic products or a decline in market size.

This paper has developed a modeling framework capturing the key features of creative media industries and used this to examine the impact of technological changes linked to digitization on market structure, product variety, quality investment, and product mix. It finds that a superstar effect in the sense of greater investment in the quality of top-selling products results from either lower quality costs for premium products or lower fixed costs for basic ones. A lower basic fixed cost also raises individual sales for these products (bigger hits)—another superstar effect. A decline in market size is found not to reduce sales levels for individual products, implying that the share of the now-smaller market held by given number of top sellers (say, the top ten) becomes larger, as seen in some of the empirical literature—also a superstar effect. Long tail outcomes, in the sense of an increase in the number of basic products that are sold, are found to result from either a reduction in basic fixed costs or a smaller market. The former change increases the total number of products, increasing variety, while the latter leaves the total number of products unchanged but increases the proportion of basic goods. In both cases the long tail is not merely an empty one: the total market share of basic products also rises. The findings in this paper demonstrate that the coexistence of superstar and long tail phenomena—as found in a number of empirical studies—is possible, indeed likely. Either a reduction in basic fixed costs or a decline in market size can explain the observation of both types of outcome. A reduction in the cost of enhancing quality on the other hand is one-sided, generating superstar but not long tail effects. The multitude and complexity of technological developments in creative media industries make predictions for the future highly uncertain. As these analyses show, future trends will be sensitive to the precise nature of changes brought about by new technologies. However, if the incidence of cost changes resulting from a particular technology can be assessed, the modeling in this paper can then provide guidance as to its likely impact on market structure and the distribution of product sales.