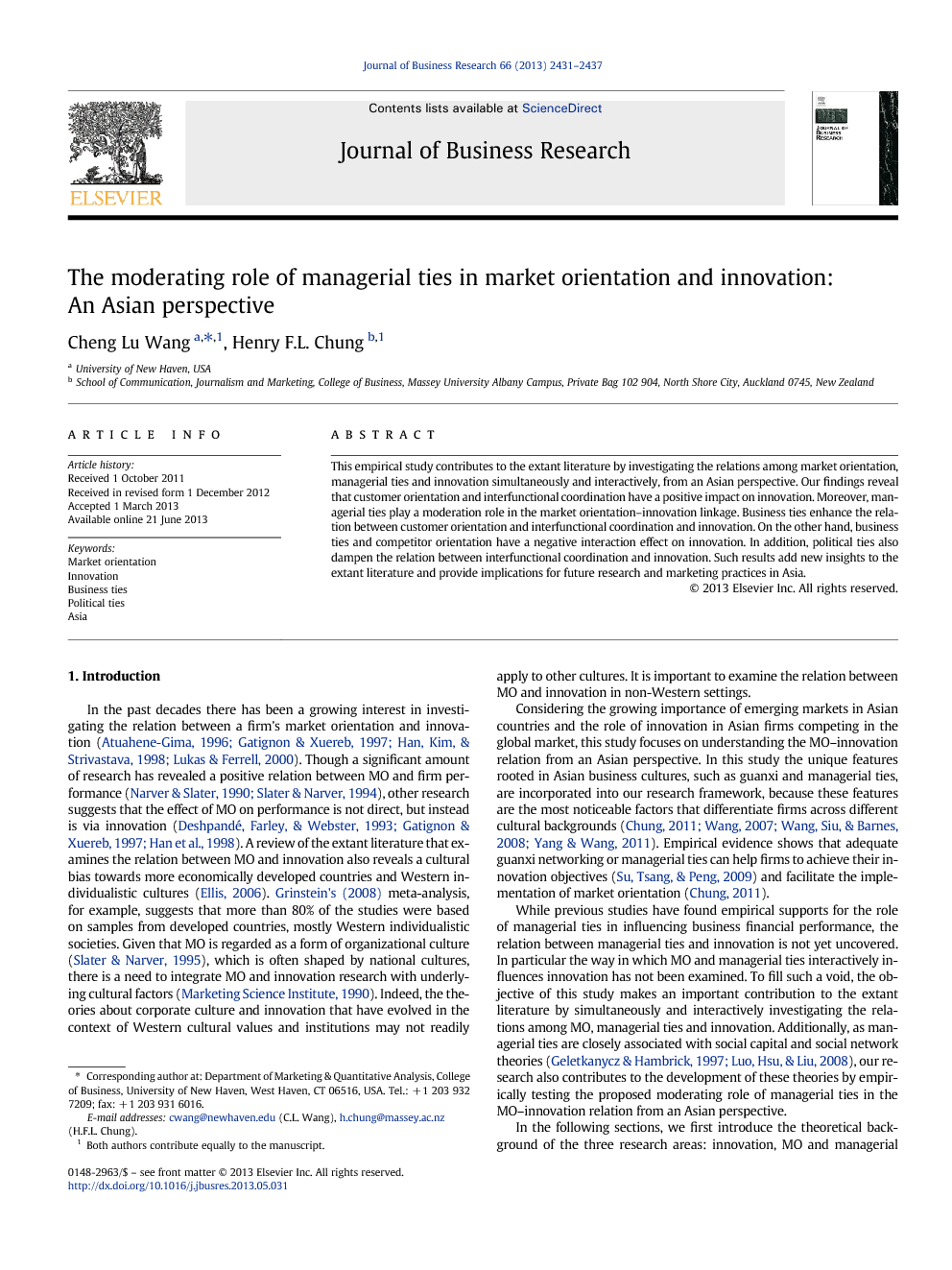 In the past decades there has been a growing interest in investigating the relation between a firm's market orientation and innovation (Atuahene-Gima, 1996, Gatignon and Xuereb, 1997, Han et al., 1998 and Lukas and Ferrell, 2000). Though a significant amount of research has revealed a positive relation between MO and firm performance (Narver and Slater, 1990 and Slater and Narver, 1994), other research suggests that the effect of MO on performance is not direct, but instead is via innovation (Deshpandé et al., 1993, Gatignon and Xuereb, 1997 and Han et al., 1998). A review of the extant literature that examines the relation between MO and innovation also reveals a cultural bias towards more economically developed countries and Western individualistic cultures (Ellis, 2006). Grinstein's (2008) meta-analysis, for example, suggests that more than 80% of the studies were based on samples from developed countries, mostly Western individualistic societies. Given that MO is regarded as a form of organizational culture (Slater & Narver, 1995), which is often shaped by national cultures, there is a need to integrate MO and innovation research with underlying cultural factors (Marketing Science Institute, 1990). Indeed, the theories about corporate culture and innovation that have evolved in the context of Western cultural values and institutions may not readily apply to other cultures. It is important to examine the relation between MO and innovation in non-Western settings. Considering the growing importance of emerging markets in Asian countries and the role of innovation in Asian firms competing in the global market, this study focuses on understanding the MO–innovation relation from an Asian perspective. In this study the unique features rooted in Asian business cultures, such as guanxi and managerial ties, are incorporated into our research framework, because these features are the most noticeable factors that differentiate firms across different cultural backgrounds (Chung, 2011, Wang, 2007, Wang et al., 2008 and Yang and Wang, 2011). Empirical evidence shows that adequate guanxi networking or managerial ties can help firms to achieve their innovation objectives (Su, Tsang, & Peng, 2009) and facilitate the implementation of market orientation (Chung, 2011). While previous studies have found empirical supports for the role of managerial ties in influencing business financial performance, the relation between managerial ties and innovation is not yet uncovered. In particular the way in which MO and managerial ties interactively influences innovation has not been examined. To fill such a void, the objective of this study makes an important contribution to the extant literature by simultaneously and interactively investigating the relations among MO, managerial ties and innovation. Additionally, as managerial ties are closely associated with social capital and social network theories (Geletkanycz and Hambrick, 1997 and Luo et al., 2008), our research also contributes to the development of these theories by empirically testing the proposed moderating role of managerial ties in the MO–innovation relation from an Asian perspective. In the following sections, we first introduce the theoretical background of the three research areas: innovation, MO and managerial ties. Next, we develop a set of hypotheses that are derived from the theoretical conceptualization and literature review. Then, we report our empirical testing of the hypotheses based on a sample of firms operating in Taiwan. Finally, we provide theoretical and managerial implications and future research directions.