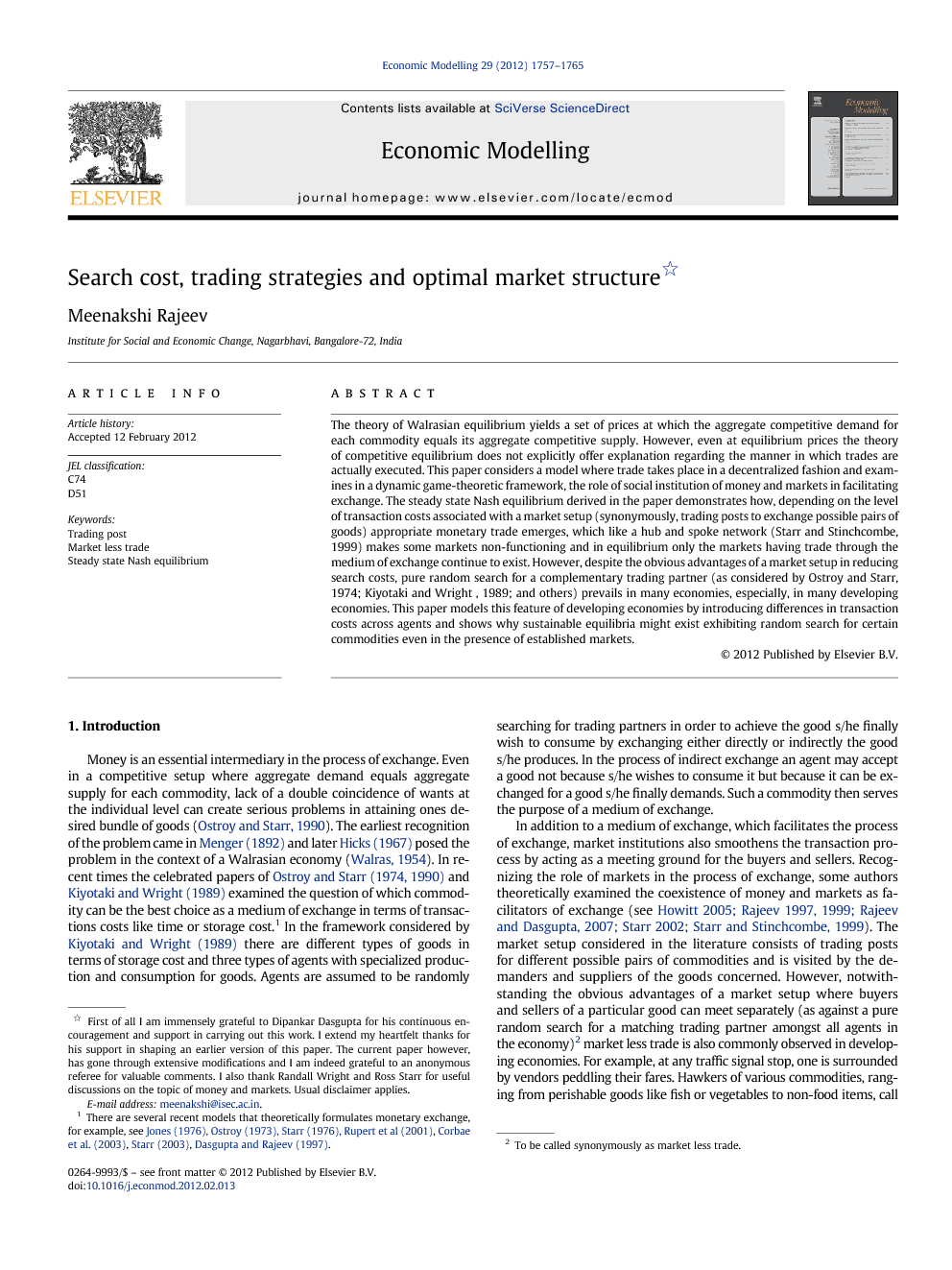 The theory of Walrasian equilibrium yields a set of prices at which the aggregate competitive demand for each commodity equals its aggregate competitive supply. However, even at equilibrium prices the theory of competitive equilibrium does not explicitly offer explanation regarding the manner in which trades are actually executed. This paper considers a model where trade takes place in a decentralized fashion and examines in a dynamic game-theoretic framework, the role of social institution of money and markets in facilitating exchange. The steady state Nash equilibrium derived in the paper demonstrates how, depending on the level of transaction costs associated with a market setup (synonymously, trading posts to exchange possible pairs of goods) appropriate monetary trade emerges, which like a hub and spoke network (Starr and Stinchcombe, 1999) makes some markets non-functioning and in equilibrium only the markets having trade through the medium of exchange continue to exist. However, despite the obvious advantages of a market setup in reducing search costs, pure random search for a complementary trading partner (as considered by Ostroy and Starr, 1974; Kiyotaki and Wright , 1989; and others) prevails in many economies, especially, in many developing economies. This paper models this feature of developing economies by introducing differences in transaction costs across agents and shows why sustainable equilibria might exist exhibiting random search for certain commodities even in the presence of established markets.

Money is an essential intermediary in the process of exchange. Even in a competitive setup where aggregate demand equals aggregate supply for each commodity, lack of a double coincidence of wants at the individual level can create serious problems in attaining ones desired bundle of goods (Ostroy and Starr, 1990). The earliest recognition of the problem came in Menger (1892) and later Hicks (1967) posed the problem in the context of a Walrasian economy (Walras, 1954). In recent times the celebrated papers of Ostroy and Starr, 1974 and Ostroy and Starr, 1990 and Kiyotaki and Wright (1989) examined the question of which commodity can be the best choice as a medium of exchange in terms of transactions costs like time or storage cost.1 In the framework considered by Kiyotaki and Wright (1989) there are different types of goods in terms of storage cost and three types of agents with specialized production and consumption for goods. Agents are assumed to be randomly searching for trading partners in order to achieve the good s/he finally wish to consume by exchanging either directly or indirectly the good s/he produces. In the process of indirect exchange an agent may accept a good not because s/he wishes to consume it but because it can be exchanged for a good s/he finally demands. Such a commodity then serves the purpose of a medium of exchange. In addition to a medium of exchange, which facilitates the process of exchange, market institutions also smoothens the transaction process by acting as a meeting ground for the buyers and sellers. Recognizing the role of markets in the process of exchange, some authors theoretically examined the coexistence of money and markets as facilitators of exchange (see Howitt, 2005, Rajeev, 1997, Rajeev, 1999, Rajeev and Dasgupta, 2007, Starr, 2002 and Starr and Stinchcombe, 1999). The market setup considered in the literature consists of trading posts for different possible pairs of commodities and is visited by the demanders and suppliers of the goods concerned. However, notwithstanding the obvious advantages of a market setup where buyers and sellers of a particular good can meet separately (as against a pure random search for a matching trading partner amongst all agents in the economy)2 market less trade is also commonly observed in developing economies. For example, at any traffic signal stop, one is surrounded by vendors peddling their fares. Hawkers of various commodities, ranging from perishable goods like fish or vegetables to non-food items, call out in residential areas in search for a potential trading partner. In other words, though a market setup can reduce the search cost to a great extent, random search persists even for the commodities having established markets. Literature is generally silent about why one may observe such a phenomenon. In the present paper we make an attempt to explain the simultaneous existence of monetary trade through pure random search and market specialization as a solution of a dynamic game problem. The problem is posed in a simple three-good economy characterized by complete absence of mutual coincidence of wants amongst the agents3 with flexible trading rules. More precisely, trade can take place either in a trading post setup (equivalently in markets to exchange different pairs of goods) or, through pure random search (market less setup). Though it is appropriate to incorporate flexible price regimes (see Kiyotaki and Wright, 1993), we abstain from doing so in this exercise as the purpose here is to show that even with pre-determined market clearing prices, monetary trade can be indispensable and market less trade can coexist in equilibrium with specialized markets, even though the latter seems to reduce transaction costs. Equilibrium here is a steady state Nash equilibrium involving the optimal trading strategies of agents engaged in a process of exchange. The paper recognizes the fact that in addition to time or storage costs, there may be additional resources necessary for one to be engaged in trade through a market setup. These may include taxes payable, rentals or power charges and so on. Initially we consider an economy with different types of agents characterized by their excess demand and supply, but agents belonging to a particular type are assumed to be identical. Later in Section 2.3 we relax this assumption. The kind of economy we consider later has different types of agents who are not only characterized by their excess demands and supplies but also by their resource constraints. For example, one group of agents may be constrained by financial resources to participate in a market setup, while the other group within the same type may have inherited (or otherwise endowed with) wealth, which may be used as collateral for acquiring capital necessary to participate in a trading post or equivalently, market setup. This is captured in the model by incorporating a cost for participating in a market setup, measured in terms of instantaneous disutility, which is higher for the resource-constrained agents. This leads to the possibility that the people who are more constrained with respect to financial resources (than with respect to time) may prefer to go in for random search. However, this need not imply that a meaningful steady state Nash equilibrium will necessarily exist. We show that feasible parametric restrictions can be obtained under which such an equilibrium exists. The important question that arises is why such an equilibrium is not common in a developed economy. This is possibly due to the fact that even a resource-constrained agent (in a developed nation) has sufficient funds or receives adequate financial support, either Government or private, to be able to participate in a market setup. In other words, not relative deprivation, but absolute level of poverty seems to matter. It is interesting to note however that the equilibrium we derive is Pareto non comparable to the one characterized by complete marketized trade. Given this background the next section describes the basic framework under consideration. Section 3 looks at the possible equilibrium strategies under different trading arrangements. A concluding section follows there-after. Appendix A provides the technical details.