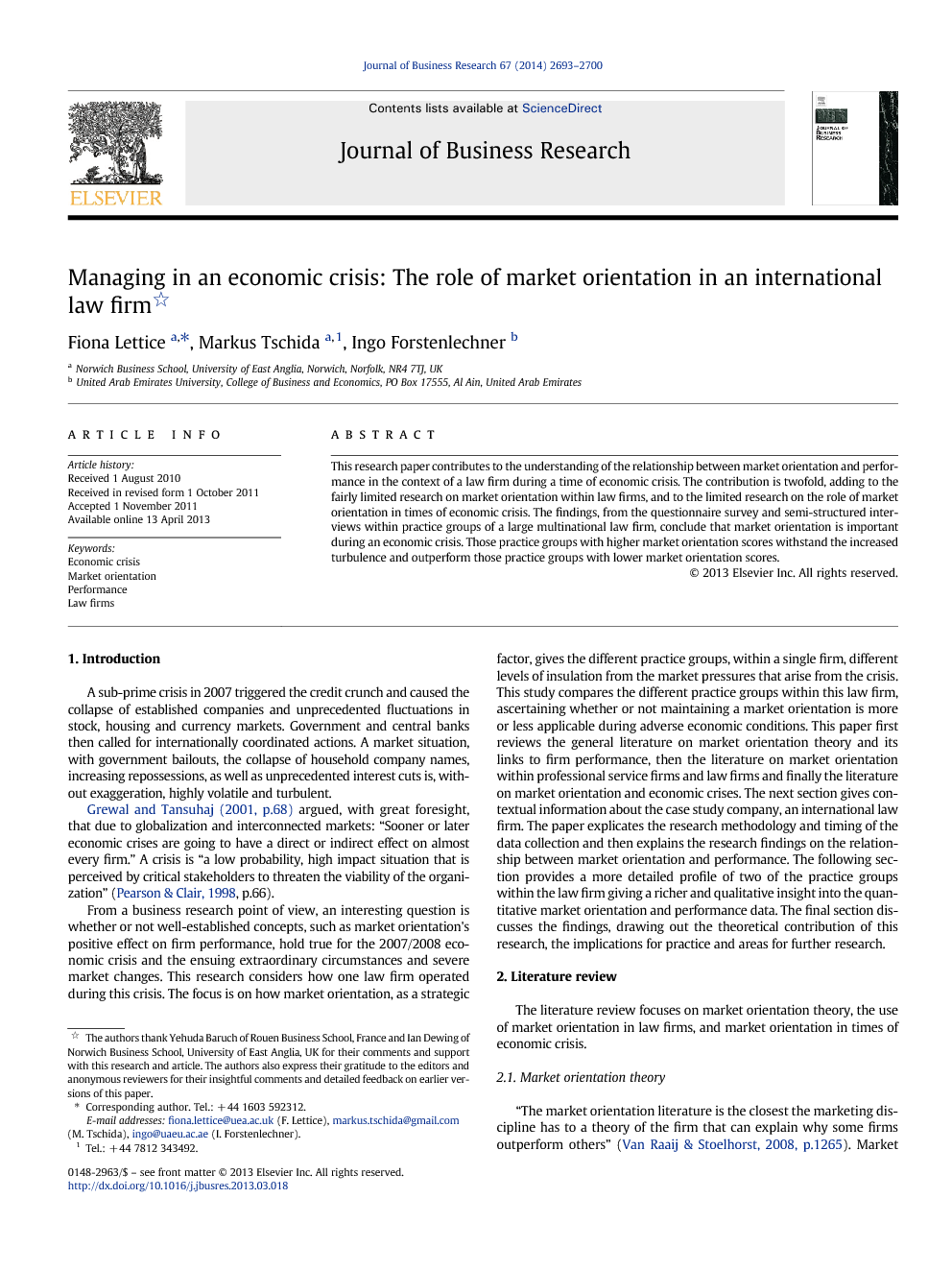 A sub-prime crisis in 2007 triggered the credit crunch and caused the collapse of established companies and unprecedented fluctuations in stock, housing and currency markets. Government and central banks then called for internationally coordinated actions. A market situation, with government bailouts, the collapse of household company names, increasing repossessions, as well as unprecedented interest cuts is, without exaggeration, highly volatile and turbulent. Grewal and Tansuhaj (2001, p.68) argued, with great foresight, that due to globalization and interconnected markets: “Sooner or later economic crises are going to have a direct or indirect effect on almost every firm.” A crisis is “a low probability, high impact situation that is perceived by critical stakeholders to threaten the viability of the organization” (Pearson & Clair, 1998, p.66). From a business research point of view, an interesting question is whether or not well-established concepts, such as market orientation's positive effect on firm performance, hold true for the 2007/2008 economic crisis and the ensuing extraordinary circumstances and severe market changes. This research considers how one law firm operated during this crisis. The focus is on how market orientation, as a strategic factor, gives the different practice groups, within a single firm, different levels of insulation from the market pressures that arise from the crisis. This study compares the different practice groups within this law firm, ascertaining whether or not maintaining a market orientation is more or less applicable during adverse economic conditions. This paper first reviews the general literature on market orientation theory and its links to firm performance, then the literature on market orientation within professional service firms and law firms and finally the literature on market orientation and economic crises. The next section gives contextual information about the case study company, an international law firm. The paper explicates the research methodology and timing of the data collection and then explains the research findings on the relationship between market orientation and performance. The following section provides a more detailed profile of two of the practice groups within the law firm giving a richer and qualitative insight into the quantitative market orientation and performance data. The final section discusses the findings, drawing out the theoretical contribution of this research, the implications for practice and areas for further research.

The findings of this research add to existing literature on market orientation, professional service firms, and economic crises. Previous research into market orientation relies heavily on quantitative rather than qualitative or mixed research methods (Kirca et al., 2005). Given the mixed method approach taken in this research, the in-depth case study of a single law firm, with multiple embedded sub-cases, provided new and unique insights into market orientation during economic crises. From the questionnaire survey on market orientation and performance, the findings from this research are broadly similar to previous studies and meta-analyses. Within LawCo and its individual practice groups, a strong and positive correlation exists between market orientation and subjective performance. This finding is similar to other research (Cano et al., 2004, Esteban et al., 2002, Grinstein, 2008, Kirca et al., 2005, Shoham et al., 2005 and Van Egeren and O'Connor, 1998). However, just as Cano et al. (2004) find, the relationship is stronger for subjective performance measures than for objective performance measures in LawCo. So, the conceptualization of the performance measure can affect the relationship between market orientation and performance. Market orientation has a significant positive impact on subjective performance and job satisfaction, but no significant relationship with the objective performance measure using average profit per partner (PPP). Vickerstaff (2000) surveys market orientation (MO) in law firms and finds that most of the top 500 firms (63%) have medium market orientation scores. LawCo also has a medium market orientation score. The quantitative data in this survey provides market orientation scores for the individual practice groups within LawCo as well as for the firm overall. The findings show that those practice groups with lower MO scores do not perform as well during the economic crisis as those with higher MO scores. This finding is different to Grewal and Tansuhaj's (2001) study, which shows that market orientation is counter-productive in times of crisis and results in lower firm performance. The semi-structured interviews within each practice group explore some of the reasons for these quantitative findings. Within this paper, a discussion of two practice groups, one with low and one with high scores, illustrates some of the differences in approach to market orientation across the firm. The practice group with the lower MO scores and lower performance scores (PG5) finds that the increased market turbulence and uncertainty improves their intelligence gathering and intelligence dissemination behaviors and processes. Their low market orientation causes problems during this period and PG5 now feel that monitoring the market closely to gather and use market intelligence during turbulent times is necessary. PG5 has a low responsiveness score. The low responsiveness score may be a factor in PG5's inability to respond to the changing market conditions quickly, which supports Grewal and Tansuhaj's (2001) recommendation that firms should emphasize strategic flexibility and responsiveness in times of crisis. PG6 focuses strongly on market intelligence but also on responsiveness, which navigates them through more turbulent market conditions. These findings support Ottesen and Grønhaug's (2004) conclusions from their case study into market orientation in turbulent environments. Ottesen and Grønhaug (2004, p.969) discover that during times of turbulence, companies may experience an increased number “of externally-initiated interactions by different types of market actors focusing on a range of different issues”. Companies thus need to react to these kinds of disturbances, which requires an increased responsiveness on a broad level. Interviewees at LawCo highlight that clients actively request the firm's view on market developments and the regulatory environment, which can increase information gathering and information dissemination activities and processes. One interviewee notes that although the economic crisis affects nearly all sectors and regions, the impact on individual practice groups and partners may be quite different. Not only do some practice groups specialize in legal areas that may be of a counter-cyclical nature, but also partners become highly specialized either in a specific subject area or sector, with a unique portfolio of clients. This combination of technical specialism and client mix can act as a counterbalance within a practice group or region.