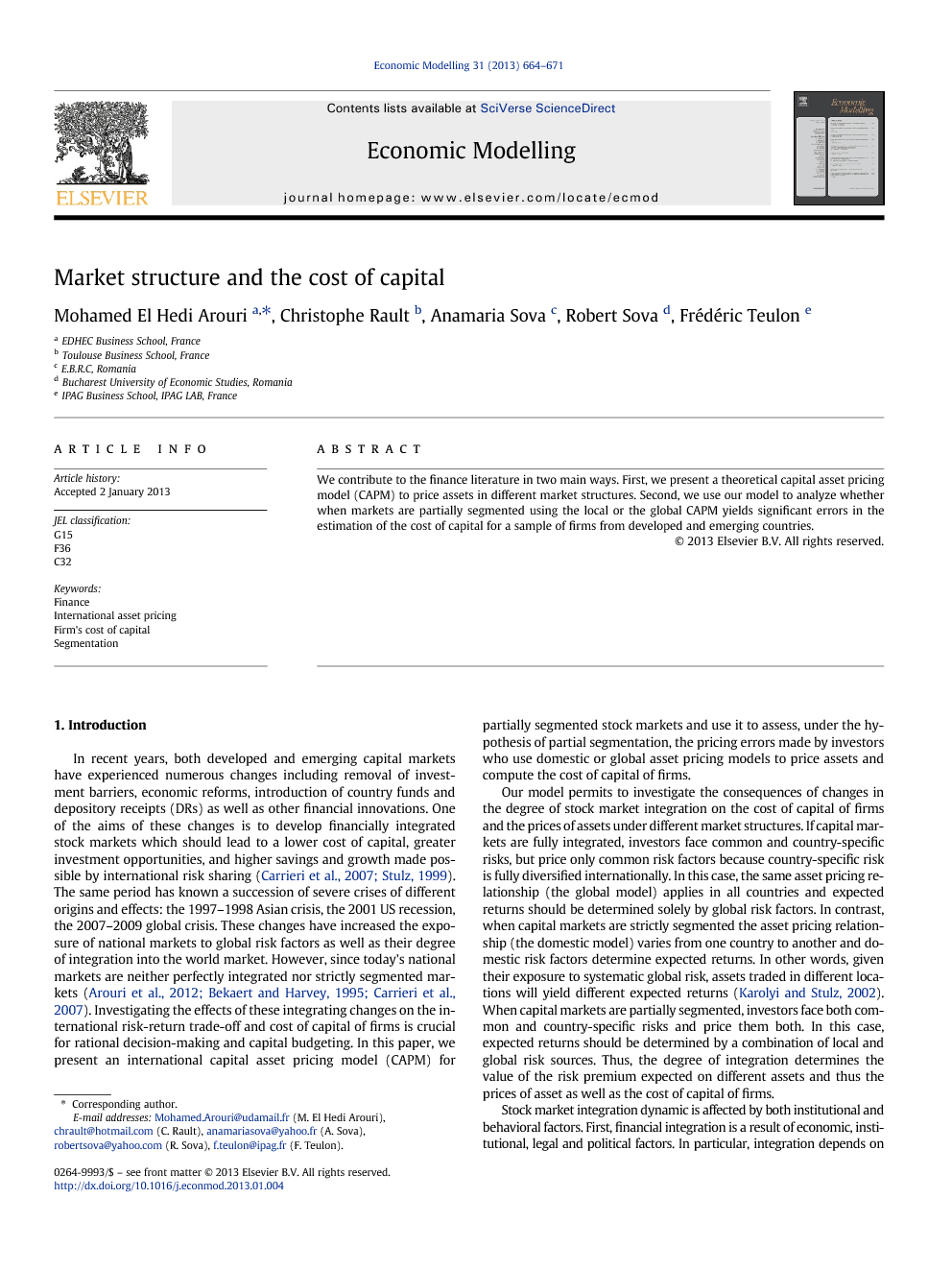 We contribute to the finance literature in two main ways. First, we present a theoretical capital asset pricing model (CAPM) to price assets in different market structures. Second, we use our model to analyze whether when markets are partially segmented using the local or the global CAPM yields significant errors in the estimation of the cost of capital for a sample of firms from developed and emerging countries.

Previous works on cost of capital in intermediate market structures often rely on ad-hoc econometric combinations of global and local risk factors. The findings of these works are rather heterogeneous and mostly inconclusive. In this paper, we first introduce a model to compute equilibrium expected asset returns in partially integrated markets. In contrast to previous works on international asset pricing, our approach is not to look into investors portfolio holdings directly but we simply consider that there are different types of investors' behavior and investigate the consequences of this assumption on international asset pricing and market structure. Specifically, we assume that because of institutional and/or behavioral factors not every investor is willing or able to hold assets from around the world in proportion to market capitalizations and thus to hold the market portfolio. We show that if some investors do not want and/or are unable to hold international assets, the remaining investors will be unable to hold the world market portfolio. After all, the first investors' holdings and the second investors' holdings together make up the entire world market. As the relative per capita supply of the stocks that the first investors hold in limited quantities or simply do not hold is high, the prices of these stocks will be relatively low. Thus, a local risk premium can be rationalized to compensate investors for the excess supply of some stocks. In that context, the traditional global CAPM continues to hold with regard to an altered supply/world market portfolio but it does not hold with regard to the actual world market portfolio. The traditional global CAPM must be augmented by a new risk factor that reflects the part of the country-specific risk undiversifiable internationally because of markets segmentation. The more the markets became integrated, the more the premium required on this additional risk factor decreases and the lower the international cost of capital. Second, we employ our model to assess, under the hypothesis of partial segmentation, the pricing errors made by investors who use the domestic or the global asset pricing model to price assets and compute the cost of capital of firms. We show that the three models (our model, the traditional global CAPM and the domestic CAPM) yield significantly different cost of equity estimates in most cases and that differences between the estimated costs of equity are higher for firms from emerging markets characterized by high level of segmentation. For highly integrated countries, local and global risk factors are often highly correlated and the three models generally lead to close estimations of the cost of capital. There are several avenues to extend our work for future research. First, our model can be extended to include deviations from PPP and investigate how exchange rate risk may affect the cost of capital of firms from emerging and developed countries. Second, the model and empirical approach introduced in this article could be used to assess the effects of regional integration on the cost of capital. Finally, further research could examine the asymmetries in the reactions of firms from emerging and developed countries to recent financial crises as well as the evolution of their cost of capital during periods of instability.