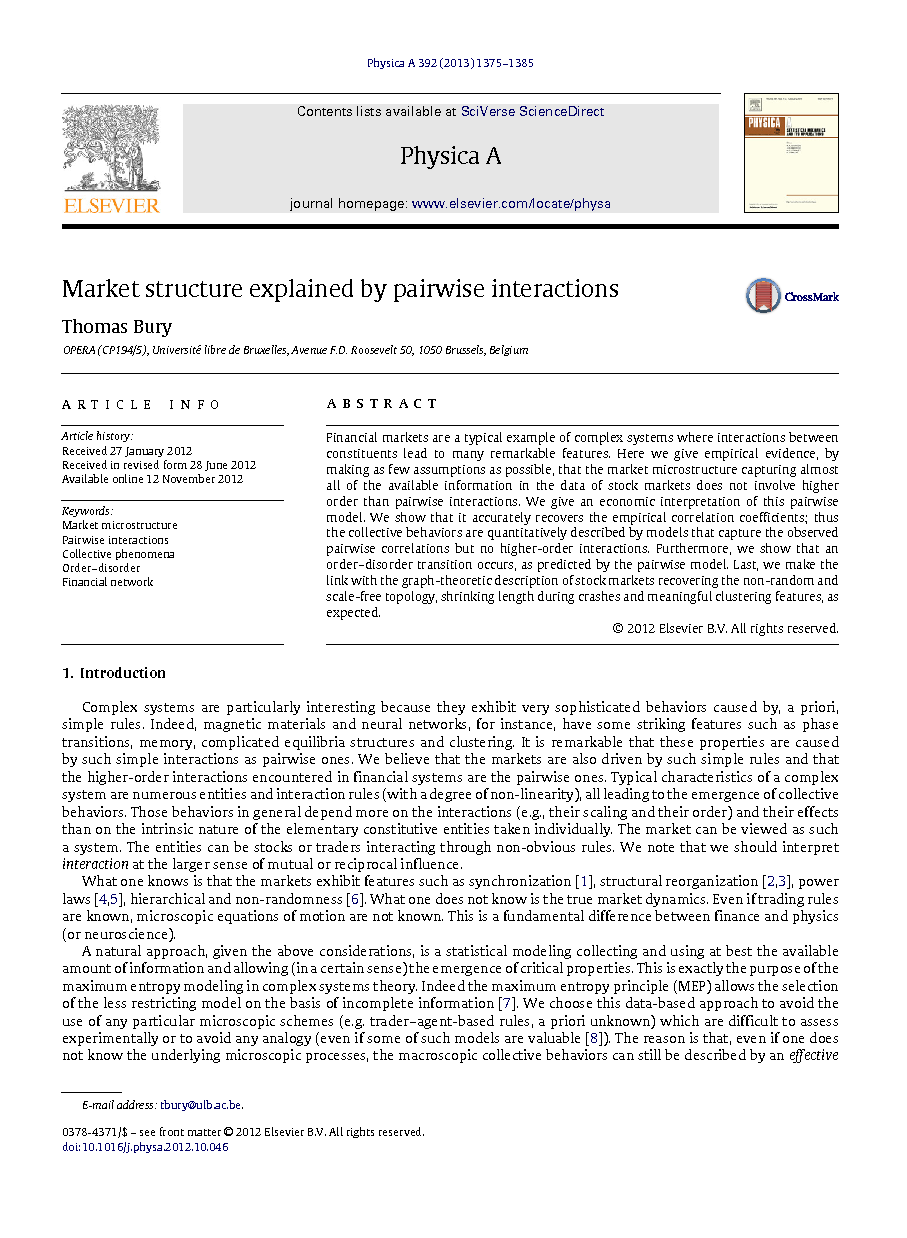 Financial markets are a typical example of complex systems where interactions between constituents lead to many remarkable features. Here we give empirical evidence, by making as few assumptions as possible, that the market microstructure capturing almost all of the available information in the data of stock markets does not involve higher order than pairwise interactions. We give an economic interpretation of this pairwise model. We show that it accurately recovers the empirical correlation coefficients; thus the collective behaviors are quantitatively described by models that capture the observed pairwise correlations but no higher-order interactions. Furthermore, we show that an order–disorder transition occurs, as predicted by the pairwise model. Last, we make the link with the graph-theoretic description of stock markets recovering the non-random and scale-free topology, shrinking length during crashes and meaningful clustering features, as expected.

Complex systems are particularly interesting because they exhibit very sophisticated behaviors caused by, a priori, simple rules. Indeed, magnetic materials and neural networks, for instance, have some striking features such as phase transitions, memory, complicated equilibria structures and clustering. It is remarkable that these properties are caused by such simple interactions as pairwise ones. We believe that the markets are also driven by such simple rules and that the higher-order interactions encountered in financial systems are the pairwise ones. Typical characteristics of a complex system are numerous entities and interaction rules (with a degree of non-linearity), all leading to the emergence of collective behaviors. Those behaviors in general depend more on the interactions (e.g., their scaling and their order) and their effects than on the intrinsic nature of the elementary constitutive entities taken individually. The market can be viewed as such a system. The entities can be stocks or traders interacting through non-obvious rules. We note that we should interpret interaction at the larger sense of mutual or reciprocal influence. What one knows is that the markets exhibit features such as synchronization [1], structural reorganization [2] and [3], power laws [4] and [5], hierarchical and non-randomness [6]. What one does not know is the true market dynamics. Even if trading rules are known, microscopic equations of motion are not known. This is a fundamental difference between finance and physics (or neuroscience). A natural approach, given the above considerations, is a statistical modeling collecting and using at best the available amount of information and allowing (in a certain sense) the emergence of critical properties. This is exactly the purpose of the maximum entropy modeling in complex systems theory. Indeed the maximum entropy principle (MEP) allows the selection of the less restricting model on the basis of incomplete information [7]. We choose this data-based approach to avoid the use of any particular microscopic schemes (e.g. trader–agent-based rules, a priori unknown) which are difficult to assess experimentally or to avoid any analogy (even if some of such models are valuable [8]). The reason is that, even if one does not know the underlying microscopic processes, the macroscopic collective behaviors can still be described by an effective model. One has long experience of this powerful approach in the description of phase transitions and magnetic materials [9]. More recently, it has led to valuable results about the description of real neural networks [10]. Moreover, this approach also has counterparts in economics. Indeed, in addition of the statistical meaning of entropy, one can interpret it as a measure of economic activity [11] and it is linked to the central concept of utility of many interacting economic entities [12] and [13]. An important outcome of such a modeling is a convenient simplified version of the real interaction structure that is still consistent with the data. In the following, we derive the model in this point of view and we study the structural properties of the resulting complex network. The critical properties will be investigated in another work. The paper is organized as follow. In Section 2, we present the model, its economic interpretation and the link between the interaction matrix and the moments. In Section 3, we give evidence that the information embedded in the data is mostly explained by the pairwise but no higher-order interactions. In Section 4, we show an order–disorder transition through actual data. In Section 5, we highlight the properties of the interaction matrix and its link to the crises. Finally, in Section 6, we explain the link with the graph-theoretic approach and the topological evolution of the market network.

We have seen that, without making assumptions on the market dynamics, the maximum entropy principle provides a rigorous pairwise model which is able to describe the data and the observed collective behaviors quantitatively. We showed that including higher-order interactions does not explain more than using the pairwise model, and thus that the collective phenomena emerge from simple pairwise interactions. To confirm this result, we showed that this statistical model is able to recover the empirical moments computed from the data, especially the mean orientations and the correlations. The success of the pairwise model implies that markets exhibit some properties observed in magnetic materials and in neural networks. Indeed, we showed that an order–disorder transition occurs in such a system, as described by a pairwise model equivalent to the Ising model. Furthermore, we showed that the interaction strengths are time dependent, meaning that an adaptive process occurs and that they are the starting point of the graph-theoretic approach of the market. In this view the system is more than the sum of its parts, is ruled by its entities pairs, exhibits collective behaviors and is quantitatively described by a pairwise model. It is surprising that such sophisticated collective behaviors, emergent structures and underlying complex trading rules are captured by a simple (a priori) scheme of interdependence involving only pairwise but no higher-order interactions.