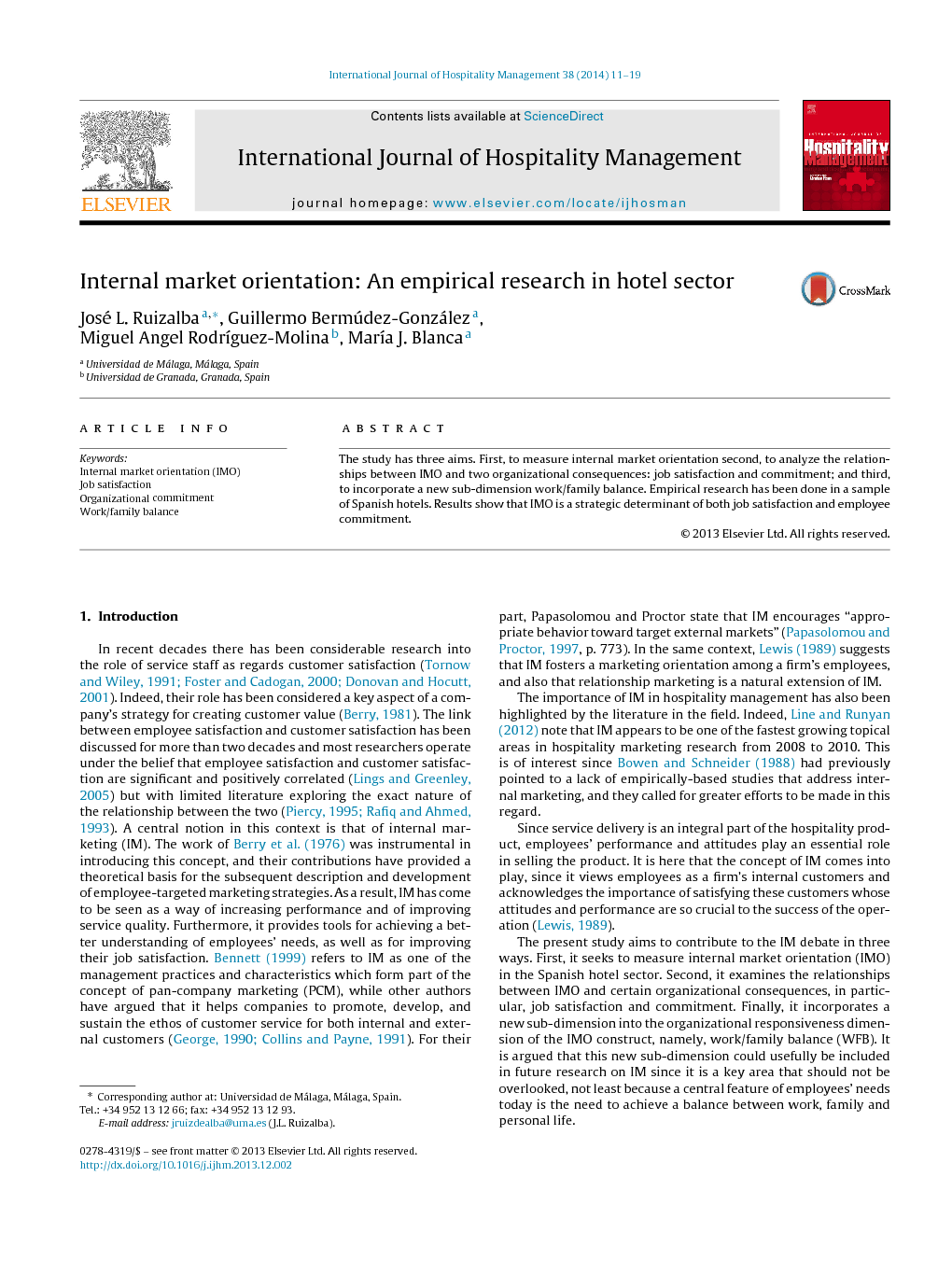 The study has three aims. First, to measure internal market orientation second, to analyze the relationships between IMO and two organizational consequences: job satisfaction and commitment; and third, to incorporate a new sub-dimension work/family balance. Empirical research has been done in a sample of Spanish hotels. Results show that IMO is a strategic determinant of both job satisfaction and employee commitment.

In recent decades there has been considerable research into the role of service staff as regards customer satisfaction (Tornow and Wiley, 1991, Foster and Cadogan, 2000 and Donovan and Hocutt, 2001). Indeed, their role has been considered a key aspect of a company's strategy for creating customer value (Berry, 1981). The link between employee satisfaction and customer satisfaction has been discussed for more than two decades and most researchers operate under the belief that employee satisfaction and customer satisfaction are significant and positively correlated (Lings and Greenley, 2005) but with limited literature exploring the exact nature of the relationship between the two (Piercy, 1995 and Rafiq and Ahmed, 1993). A central notion in this context is that of internal marketing (IM). The work of Berry et al. (1976) was instrumental in introducing this concept, and their contributions have provided a theoretical basis for the subsequent description and development of employee-targeted marketing strategies. As a result, IM has come to be seen as a way of increasing performance and of improving service quality. Furthermore, it provides tools for achieving a better understanding of employees’ needs, as well as for improving their job satisfaction. Bennett (1999) refers to IM as one of the management practices and characteristics which form part of the concept of pan-company marketing (PCM), while other authors have argued that it helps companies to promote, develop, and sustain the ethos of customer service for both internal and external customers (George, 1990 and Collins and Payne, 1991). For their part, Papasolomou and Proctor state that IM encourages “appropriate behavior toward target external markets” (Papasolomou and Proctor, 1997, p. 773). In the same context, Lewis (1989) suggests that IM fosters a marketing orientation among a firm's employees, and also that relationship marketing is a natural extension of IM. The importance of IM in hospitality management has also been highlighted by the literature in the field. Indeed, Line and Runyan (2012) note that IM appears to be one of the fastest growing topical areas in hospitality marketing research from 2008 to 2010. This is of interest since Bowen and Schneider (1988) had previously pointed to a lack of empirically-based studies that address internal marketing, and they called for greater efforts to be made in this regard. Since service delivery is an integral part of the hospitality product, employees’ performance and attitudes play an essential role in selling the product. It is here that the concept of IM comes into play, since it views employees as a firm's internal customers and acknowledges the importance of satisfying these customers whose attitudes and performance are so crucial to the success of the operation (Lewis, 1989). The present study aims to contribute to the IM debate in three ways. First, it seeks to measure internal market orientation (IMO) in the Spanish hotel sector. Second, it examines the relationships between IMO and certain organizational consequences, in particular, job satisfaction and commitment. Finally, it incorporates a new sub-dimension into the organizational responsiveness dimension of the IMO construct, namely, work/family balance (WFB). It is argued that this new sub-dimension could usefully be included in future research on IM since it is a key area that should not be overlooked, not least because a central feature of employees’ needs today is the need to achieve a balance between work, family and personal life.

The results of this study have both academic and practical implications. First, by demonstrating the validity and reliability of the measure of IMO in the hotel sector the study is consistent with the work of authors such as Piercy (1995) or Gounaris (2008) who argue that within the context of strategic marketing there should be an internal marketing orientation that matches the focus on external marketing. We agree with Gounaris (2006) that it ought to be noted that caution is needed before the instrument presented in this study can be safely adopted as an universal measure of the company's degree of IMO adoption. The results also show that within the hotel sector the IMO consists of three constructs: intelligence generation, internal communication, and response to intelligence. The first and last of these constructs are formed, in turn, by five first-order constructs: identification of value exchange and internal market segmentation in the case of intelligence generation; and management concern, training, and work/family balance in the case of the response to intelligence. A noteworthy finding of this study is the confirmation of the validity of including work/family balance as part of the response to intelligence construct. The very high standardized coefficient obtained for work/family balance (0.87) is not only higher than that corresponding to training (0.80), an aspect that has been widely studied for its influence on response to intelligence, but is also very close to the value corresponding to management concern (0.90). With respect to business practice, many authors (e.g., Rafiq and Ahmed, 2000) have noted that although there is a sound scientific basis for IM very few companies actually implement it. In this regard, an IMO can act as a stimulus for IM strategies, not only in relation to front office staff but for any employee in the hospitality sector. This stimulus role is supported by the present results, which confirm that the presence of an IMO improves job satisfaction among hotel employees. The study also shows that the presence of an IMO has an influence on employees’ commitment, and that it does so in two ways: both directly and through the positive effect which job satisfaction has on commitment. As such, the presence of an IMO improves the effectiveness of IM practices and, therefore, customer satisfaction as a result of two processes: improved performance and the increased search for service excellence which follows from greater job satisfaction. One line of research which is suggested by the present results concerns the relationship between IMO and performance. In relation to market orientation, and based on the concept of Siguaw et al. (1994), Piercy et al. (2009) argue strongly that a market-oriented company would influence salespeople's selling behaviors and their performance. In an analogous way one could study whether something similar occurs with employee performance as the degree of IMO increases. Other aspects that merit further investigation include testing the questionnaire in different cultural contexts, since employees’ interests and values may vary according to the setting in which they work (Hofstede, 1994). It would also be interesting to carry out comparative studies on the extent to which an IMO is adopted by hotels in different countries, as well as investigating sectors other than hotels within the hospitality industry. Drawing upon the findings of authors such as Kandasamy and Ancheri (2009), Line and Runyan (2012) argue that the growth of research in the field of IM “indicates an increased belief that internal issues of employee satisfaction and quality of work life […] have a direct impact on customer satisfaction and retention” (Line and Runyan, 2012: 483). In this regard, there is a need for further research on the relationship between IMO and the satisfaction and loyalty of external customers. Brown and Leigh (1996) examine the relationship between customer orientation and employee job satisfaction (Hoffman and Ingram, 1992 and Pettijohn et al., 2002), they concluded that customer satisfaction increases increments of job satisfaction levels. Likewise, one should consider the research on customer orientation of service employees (COSE) which has been conducted in order to reach a better understanding of customer-related outcome variables (Kelley, 1992, Henning-Thurau and Thurau, 2002 and Kim and Ok, 2010), and it is our view that IMO could be investigated as a possible precursor of COSE. Lings and Greenley (2005) analyzed IMO and customer satisfaction: the results of regression analysis indicated that IMO had a significant impact on customer satisfaction providing empirical support for the assertions of Grönroos (1990) and Reynoso and Moores (1995). Another line of research would be to carry out empirical studies of small enterprises within the hotel sector. In a recent study of rural tourism enterprises, Polo et al. (2012) suggested that market orientation models should be adapted so as to enable them to be applied to smaller enterprises. They concluded that smaller size has implications for how the enterprise adopts MO, differentiating it from the approach taken by larger businesses. In our view, this recommendation would also apply to the study of IMO in smaller enterprises. Finally, there is also a need to study further the relationship between IMO and work/family balance in companies. Research by Rafiq and Ahmed (2000) showed that few companies implement IM practices because they lack an IMO, and this suggests that companies would find it easier to apply IM strategies were they to adopt an IMO. Future research should therefore examine whether companies that introduce and/or strengthen their IMO subsequently obtain better financial results and develop sustainable competitive advantages. More importantly, by placing a greater emphasis on the needs of their employees these companies would be respecting more the dignity of each individual and, therefore, would be helping to improve society as whole.