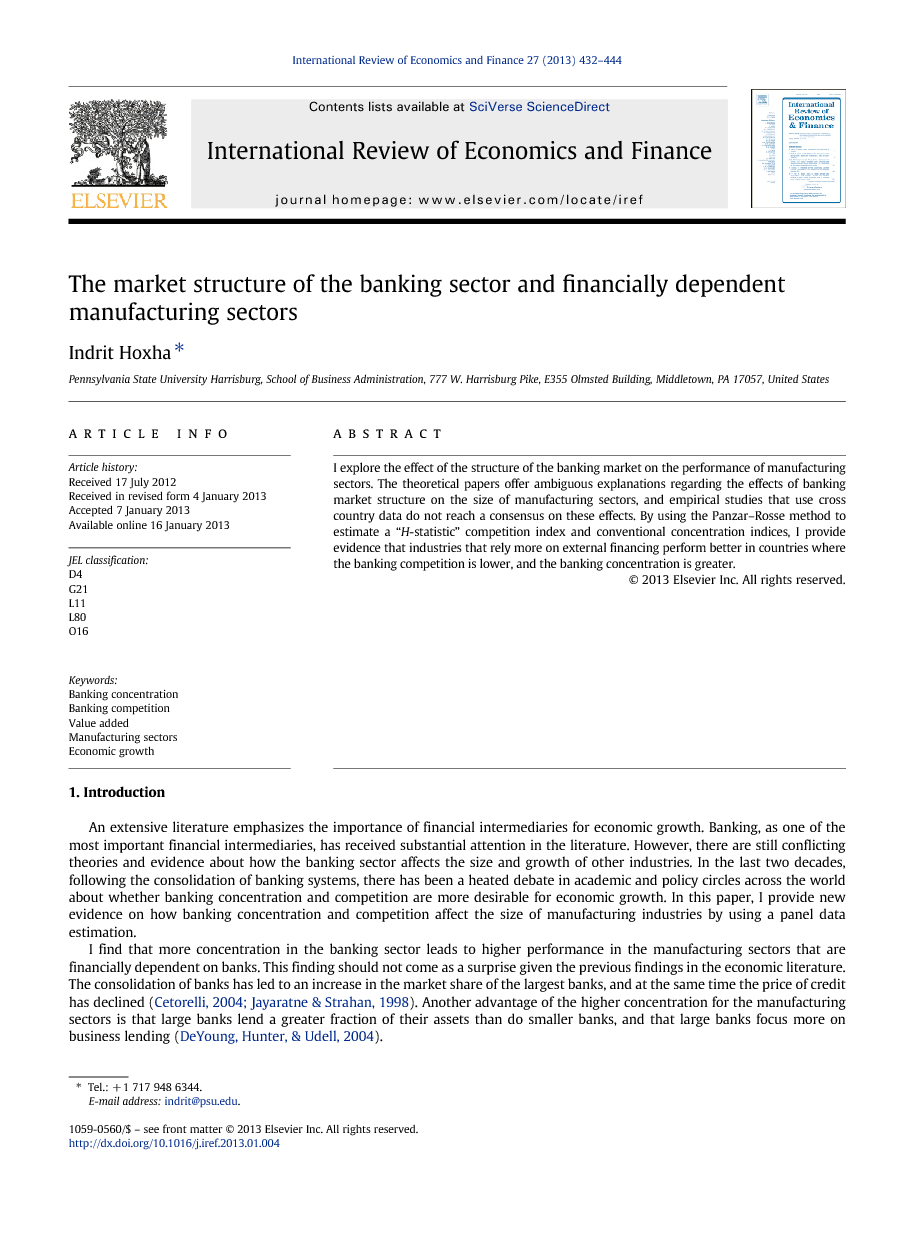 I explore the effect of the structure of the banking market on the performance of manufacturing sectors. The theoretical papers offer ambiguous explanations regarding the effects of banking market structure on the size of manufacturing sectors, and empirical studies that use cross country data do not reach a consensus on these effects. By using the Panzar–Rosse method to estimate a “H-statistic” competition index and conventional concentration indices, I provide evidence that industries that rely more on external financing perform better in countries where the banking competition is lower, and the banking concentration is greater.

This paper assesses the impact of the banking market structure on the size of the value added of manufacturing industries that are dependent on external financing. An important innovation of this paper is the utilization of panel data to control for the time variation of the market structure in the banking sector. Another advantage over the previous literature is the availability of contemporary data for the banking and manufacturing sectors. By using a bank concentration index as a measure of the share of the market pertaining to the largest banks, I measure whether large banks dominate the market. This paper provides evidence that, in markets where the banking concentration is higher, industries in need of external funds perform better. Furthermore, I use a competition index that is estimated as the sum of the elasticities of the total revenue of the banks to factor input prices by using a reduced form equation for bank revenues. The results suggest that bank competition is harmful to the performance of industries in need of external funds. These results provide some support to theories that monopolistic banks are better at providing credit to opaque firms (Petersen & Rajan, 1995) and that an increase in banking competition leads to a decreased amount of credit available to manufacturing sectors (Marquez, 2002). The results are robust to the control for various external dependence measurements, or other factors that might affect the relationship between bank concentration and bank competition with the performance of industries in need of external funds, such as: capital market development, ownership of the banks, legal creditor rights. In conclusion, this paper supports the view that market power is good for the access to financing and that banking competition is harmful to the output of the industries dependent on external financing. However, we need to study in more detail banking relationships and develop models to incorporate the critical role of external financial dependence.