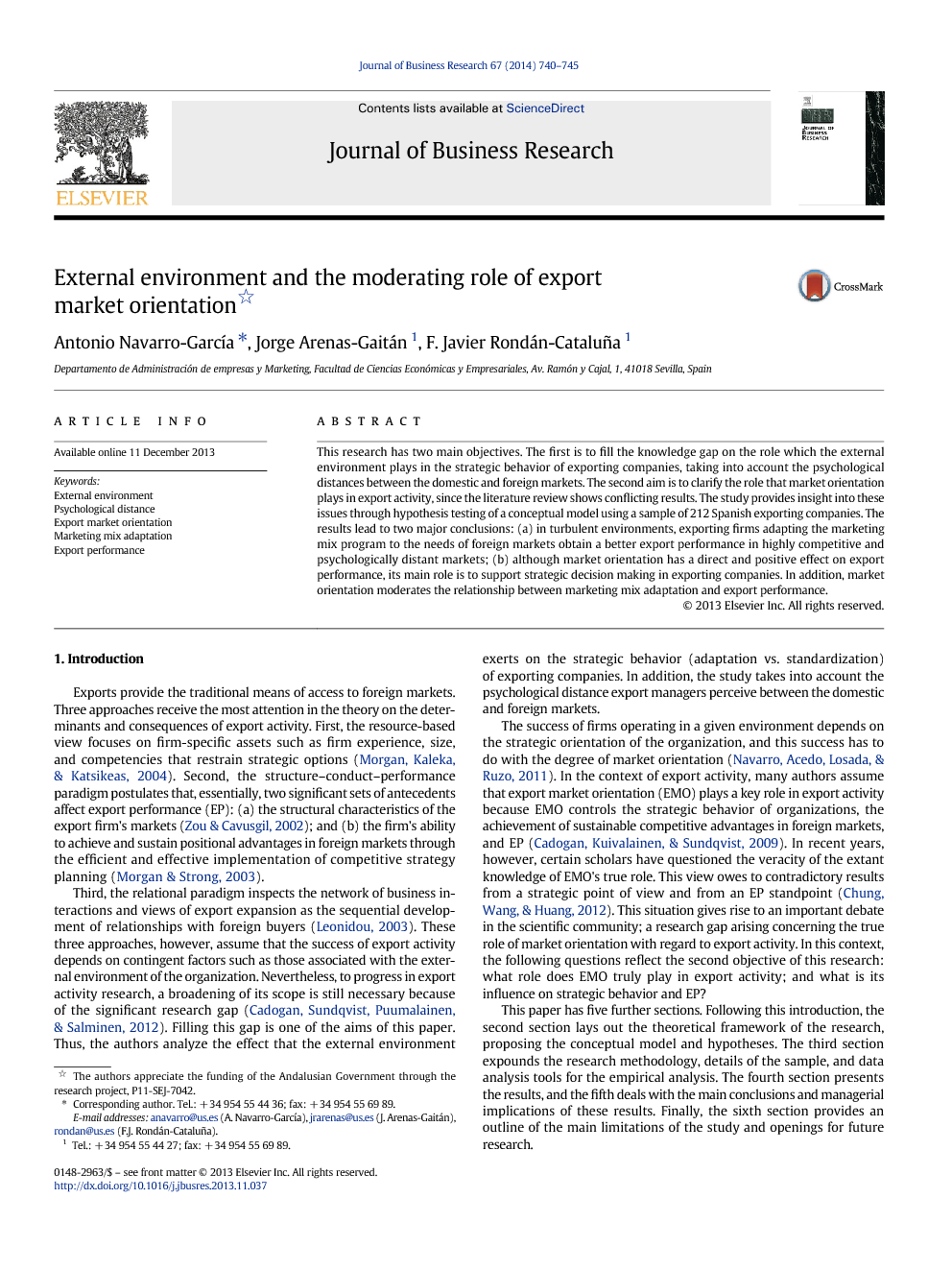 This research has two main objectives. The first is to fill the knowledge gap on the role which the external environment plays in the strategic behavior of exporting companies, taking into account the psychological distances between the domestic and foreign markets. The second aim is to clarify the role that market orientation plays in export activity, since the literature review shows conflicting results. The study provides insight into these issues through hypothesis testing of a conceptual model using a sample of 212 Spanish exporting companies. The results lead to two major conclusions: (a) in turbulent environments, exporting firms adapting the marketing mix program to the needs of foreign markets obtain a better export performance in highly competitive and psychologically distant markets; (b) although market orientation has a direct and positive effect on export performance, its main role is to support strategic decision making in exporting companies. In addition, market orientation moderates the relationship between marketing mix adaptation and export performance.

Exports provide the traditional means of access to foreign markets. Three approaches receive the most attention in the theory on the determinants and consequences of export activity. First, the resource-based view focuses on firm-specific assets such as firm experience, size, and competencies that restrain strategic options (Morgan, Kaleka, & Katsikeas, 2004). Second, the structure–conduct–performance paradigm postulates that, essentially, two significant sets of antecedents affect export performance (EP): (a) the structural characteristics of the export firm's markets (Zou & Cavusgil, 2002); and (b) the firm's ability to achieve and sustain positional advantages in foreign markets through the efficient and effective implementation of competitive strategy planning (Morgan & Strong, 2003). Third, the relational paradigm inspects the network of business interactions and views of export expansion as the sequential development of relationships with foreign buyers (Leonidou, 2003). These three approaches, however, assume that the success of export activity depends on contingent factors such as those associated with the external environment of the organization. Nevertheless, to progress in export activity research, a broadening of its scope is still necessary because of the significant research gap (Cadogan, Sundqvist, Puumalainen, & Salminen, 2012). Filling this gap is one of the aims of this paper. Thus, the authors analyze the effect that the external environment exerts on the strategic behavior (adaptation vs. standardization) of exporting companies. In addition, the study takes into account the psychological distance export managers perceive between the domestic and foreign markets. The success of firms operating in a given environment depends on the strategic orientation of the organization, and this success has to do with the degree of market orientation (Navarro, Acedo, Losada, & Ruzo, 2011). In the context of export activity, many authors assume that export market orientation (EMO) plays a key role in export activity because EMO controls the strategic behavior of organizations, the achievement of sustainable competitive advantages in foreign markets, and EP (Cadogan, Kuivalainen, & Sundqvist, 2009). In recent years, however, certain scholars have questioned the veracity of the extant knowledge of EMO's true role. This view owes to contradictory results from a strategic point of view and from an EP standpoint (Chung, Wang, & Huang, 2012). This situation gives rise to an important debate in the scientific community; a research gap arising concerning the true role of market orientation with regard to export activity. In this context, the following questions reflect the second objective of this research: what role does EMO truly play in export activity; and what is its influence on strategic behavior and EP? This paper has five further sections. Following this introduction, the second section lays out the theoretical framework of the research, proposing the conceptual model and hypotheses. The third section expounds the research methodology, details of the sample, and data analysis tools for the empirical analysis. The fourth section presents the results, and the fifth deals with the main conclusions and managerial implications of these results. Finally, the sixth section provides an outline of the main limitations of the study and openings for future research.