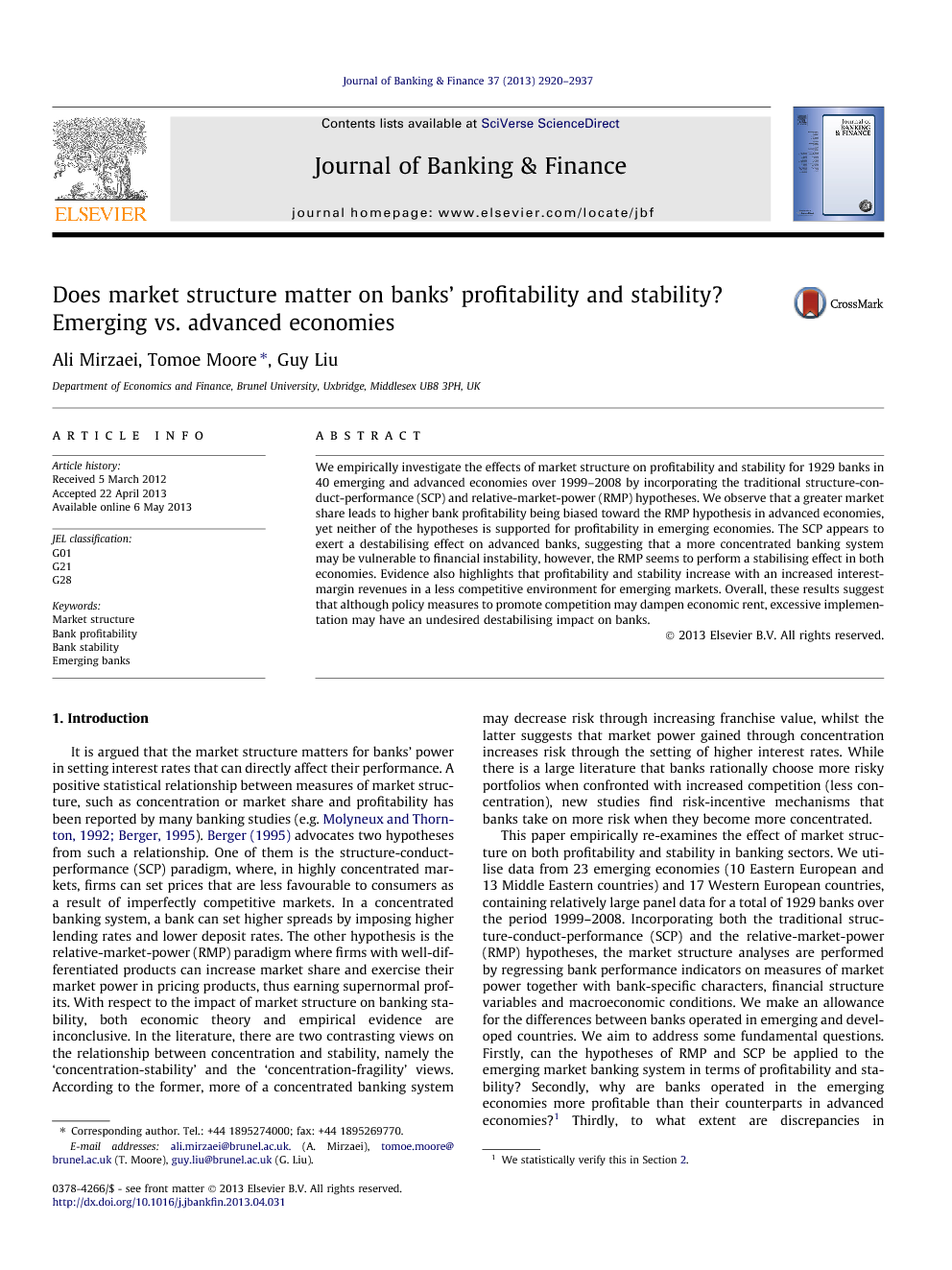 We empirically investigate the effects of market structure on profitability and stability for 1929 banks in 40 emerging and advanced economies over 1999–2008 by incorporating the traditional structure-conduct-performance (SCP) and relative-market-power (RMP) hypotheses. We observe that a greater market share leads to higher bank profitability being biased toward the RMP hypothesis in advanced economies, yet neither of the hypotheses is supported for profitability in emerging economies. The SCP appears to exert a destabilising effect on advanced banks, suggesting that a more concentrated banking system may be vulnerable to financial instability, however, the RMP seems to perform a stabilising effect in both economies. Evidence also highlights that profitability and stability increase with an increased interest-margin revenues in a less competitive environment for emerging markets. Overall, these results suggest that although policy measures to promote competition may dampen economic rent, excessive implementation may have an undesired destabilising impact on banks.

This paper empirically investigates the effects of market structure by controlling bank-specific characteristics, overall financial structure and macroeconomic environment on profitability and stability of banks in emerging and advanced economies during the period of 1999–2008. In particular, we assessed the extent to which the relatively high profitability in emerging banking systems can be attributed to less competitive market conditions. We have shown that there are large differences in profitability among the banks in our sample, and that a significant amount of this variation can be explained by the factors included in our analysis. Market share has no significant impact on bank profitability in emerging markets, providing little evidence in support of the RMP hypothesis, whereas we find evidence to support the hypothesis in advanced economy banking systems. The effect of market concentration on profitability is either insignificant on advanced banking market or the unexpected negative impact on Middle East. Regarding bank stability, concentration is negatively associated with bank soundness in advanced economies, suggesting that concentrated markets may encourage risk-taking behaviour in banks. This is contrasted with the stabilising role of market share found for both emerging and advanced banks. The empirical findings have several implications for policy makers. Firstly, given the overall robust impact of bank-specific variables that are specified as control variables, the conventional wisdom of bank prudential regulations continues to be implemented, e.g. bank managers should undertake the necessary measures to enhance the role of capitalisation, and to create efficient cost-control. Secondly, although during the period under study, there was a significant decrease in the market concentration of emerging market banks (recall Fig. 1c), there is scope for further reduction without jeopardising the level of profitability. This should also be encouraged for advanced economy banks, given the destabilising effect of concentration. A fall in banking concentration ratios could be promoted through a variety of ways. Antitrust enforcement or anti-collusion regulatory action may indeed be stressed, also policies that penalise or impair mergers and acquisitions may be considered. Thirdly, in emerging economies, profits seem to be derived at a cost to the remainder of the economy where higher prices are imposed on borrowers and lenders, yet, at the same time, a higher profit margin is found to be contributory to stability in emerging banks in a less competitive environment. Thus, when implementing measures to boost competition, such as the removal of unnecessary restrictions and entry-barriers in establishing new private or foreign banks, there is need for a careful approach, otherwise excessive anti-competitive measures may threaten bank stability. Another important implication drawn from our empirical results is that although the RMP hypothesis dominates in the advanced-market banking system, the power of market share has an effect of stability, which policy makers should bear in mind when they regulate their anti-monopolistic provisions. Overall, these results suggest that although measures to promote competition may dampen economic rent, excessive implementation may yield an undesired destabilising effect on banks.