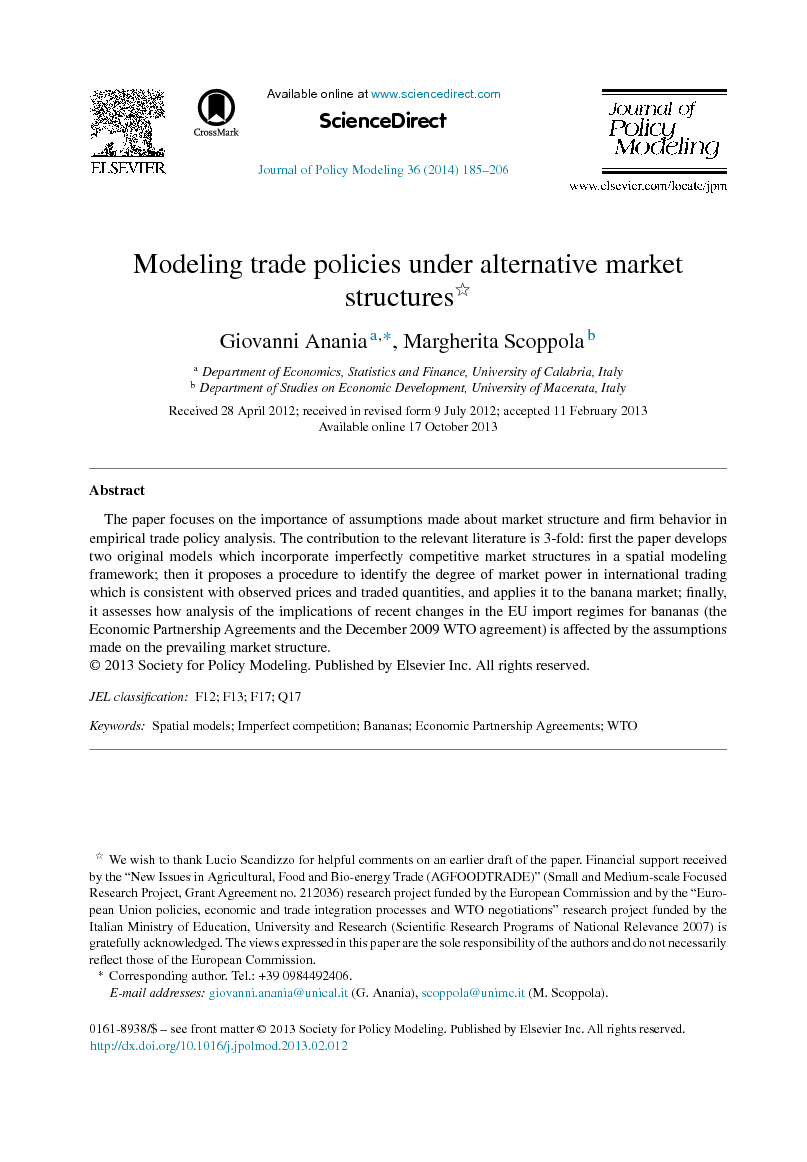 The paper focuses on the importance of assumptions made about market structure and firm behavior in empirical trade policy analysis. The contribution to the relevant literature is 3-fold: first the paper develops two original models which incorporate imperfectly competitive market structures in a spatial modeling framework; then it proposes a procedure to identify the degree of market power in international trading which is consistent with observed prices and traded quantities, and applies it to the banana market; finally, it assesses how analysis of the implications of recent changes in the EU import regimes for bananas (the Economic Partnership Agreements and the December 2009 WTO agreement) is affected by the assumptions made on the prevailing market structure.

The goal of this paper was to address the importance of the assumptions made about market structure and traders’ behavior in empirical trade policy analysis. We believe its contribution to unraveling this issue is 3-fold: it develops two original models which incorporate imperfectly competitive market structures in a spatial modeling framework; it proposes a procedure to assess the degree of market power in international markets which is applied to banana trade and, finally, it shows how the assessment of the effects of the most recent EU import regimes for bananas is affected by assumptions made on the prevailing market structure. The paper develops two modified versions of the Takayama and Judge (1971) spatial trade model. The first model includes a cartel of the firms handling international trade. The second model incorporates oligopolistic and oligopsonistic behaviors of trading firms through a mark-up; this modeling framework has the advantage of being flexible, easy to implement and does not require identification of conjectural variation parameters, which would imply making explicit assumptions about the number and symmetry of the firms exporting to each importing market. The percentage of mark-up provides a representation of the degree of market power without having to make restrictive assumptions about the nature of competition. The two step calibration procedure used to make the model replicate observed country net trade positions provides a useful tool to address an important issue for empirical policy analysis, that is: what is the range of degree of market power in the market under scrutiny? Reducing the space of the feasible market structures is relevant in assessing the effects of trade policy changes as these may crucially depend on assumptions made on the degree of market power exerted by relevant actors. Indeed, the result of the analysis presented in the paper for the banana market is that some of the market structures hypothesized turn out to be unfeasible, being largely inconsistent with observed traded quantities and border prices. This happens when a cartel maximizing firms’ joint profits is assumed, but also for imperfectly competitive world market structures where the mark-up is above 12%. In fact, the results show that observed data are only consistent with market behaviors which are far away from Cournot and, actually, are close to perfect competition under most values of demand elasticities and market shares. This result appears even more important given the high concentration of international trade of bananas. Regardless of the market structure considered, the implementation of the EPAs is expected to increase ACP exports to the EU significantly and generate overall consistent benefits for ACP countries; trade diversion occurs, with ACP exports previously directed to non-EU countries now redirected toward the latter. The 2009 WTO agreement significantly reduces the preferential margin for ACP countries, but does not offset the benefits from the EPAs; as a whole, with both the EPAs and the WTO agreement in place, ACP countries are better off in terms of both exports and export revenues. Analogously, despite the trade creation effect of the lower tariff they face on the EU market, the WTO agreement does not compensate MFN countries for the loss of competitiveness vis a vis ACP countries as a result of the EPAs. Because of the relatively low level of market power, simulation results are quite similar across the five market structures considered. However, the results show that as the feasible degree of market power increases, market structure matters not only in terms of the expected magnitude of the impact on the different agents involved, but in terms of its sign as well. The findings of this paper, and especially those concerning the degree of market power in the world market for bananas, depend upon a number of assumptions, common to most empirical studies on agricultural commodities, the most important of which are that: products are homogeneous; upstream and downstream firms have no market power; the policy changes considered have no effect on firm behavior or market structure. The removal of any of the above is likely to affect the results reached; however, this would imply the use of a completely different modeling framework and data needs which would be difficult to satisfy. Notwithstanding these simplifying assumptions, this paper proposes within a spatial framework an innovative and relatively simple procedure to assess the market power of intermediaries in empirical trade policy analysis; because of the importance of assumptions made regarding market structure in policy analysis, we believe that this approach could be useful to better evaluate the impact of trade policies.