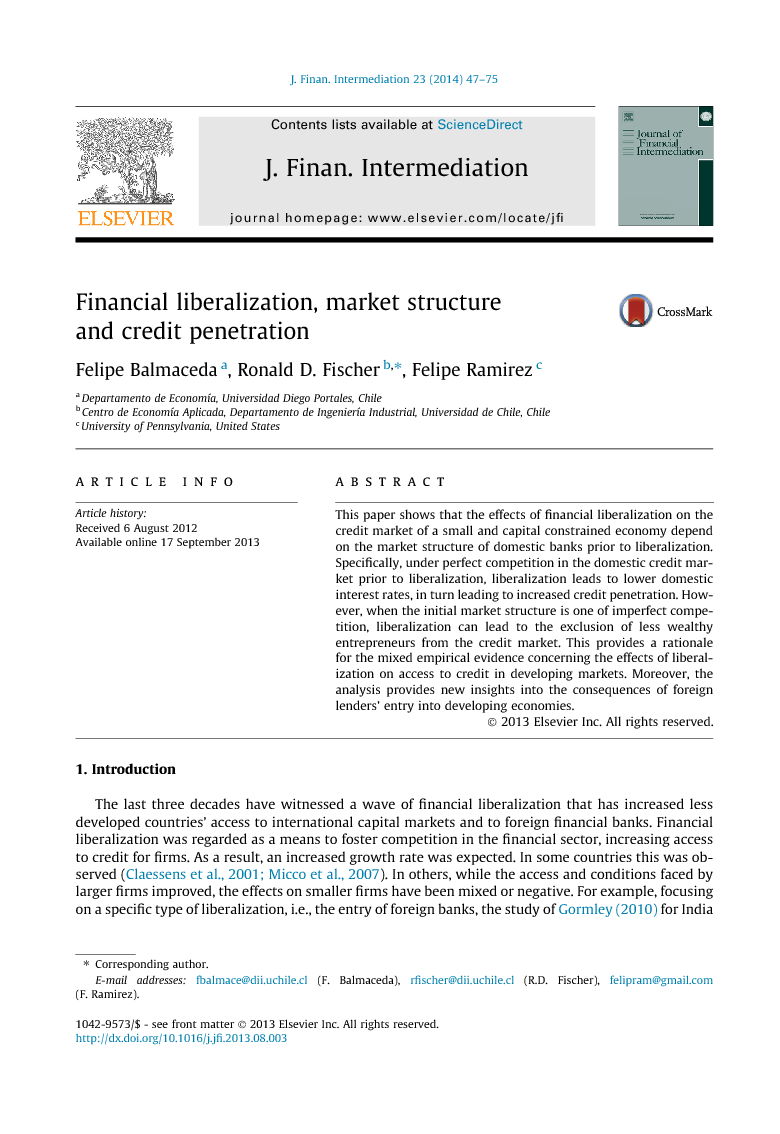 6. Conclusions One of the puzzles of the recent experience with financial liberalization in developing countries has been the observation that in some countries access to credit falls rather than increases, as would have been expected from the increased competition and better lending technologies of multinational banks. This paper presents an explanation for this observation based on the notion that the effects of liberalization depend on the ex ante financial market structure in the country. In particular, we show that when the country has an initially competitive banking structure, financial liberalization is unambiguously beneficial, in terms of access to lower international rates, increased availability of capital, lower loan costs for some firms and increased access to credit. In the case of initially imperfect competition, access among weaker firms may decrease, because the cost of funds for domestic banks rises, as a result of increased competition for funds by foreign banks (or because some savers now have access to international markets). The increased cost of funds coupled to a reduction in lending to weaker firms are consistent with the observations of the effects of financial deregulation in the US (Berger et al., 1995), and there is recent evidence of these effects in other countries after financial liberalization (Rashid, 2011). Finally, observe that it is possible to test the model by including, in the models that examine the effects of financial liberalization on market access, a variable representing the competitiveness of the financial system previous to liberalization. The logic of our results is driven by the fact that under imperfect competition, the cost of funds for banks is lower than under competition. Therefore, once the financial system in liberalized, there is a rise in the cost of funds for banks, and increased competition for wealthier entrepreneurs, because of the entry of more efficient foreign banks. The end result is a possible reduction in lending to weaker entrepreneurs and lower credit penetration. The reader may question the relevance of our results, since it is unusual for the banking industry in a country to be controlled by a single firm. However, it is straightforward to show that the results extend without any changes to the case of a banking cartel, which is not uncommon in developing countries with closed financial markets. Moreover, the main results should continue to hold in more general models of imperfect competition, but it would make the algebra much more complicated without further gain in intuition beyond that obtained in the monopoly case. Nonetheless, it is possible to speculate on possible models of imperfect competition to tackle the issues studied here. One possibility would be to extend our model to the double Bertrand Competition model; i.e., having competition on both loans and deposits, in the absence of an infinitely elastic supply of funds as in Freixas and Rochet (1997, p. 63–67). In these models, there is an equilibrium in which banks make zero profits, there is one active bank and the profit margin (net of fixed costs) is positive. A second approach is to have a differentiated products Salop-type model with n banks equidistantly distributed on the unit circle and where, at each location there is a mass 1 of entrepreneurs and the wealth distribution is the same at each location. Again, this model would predict that the profit margin is positive and falls as the number of banks increases, suggesting that our results would continue to hold when there are a small number of banks prior to liberalization.