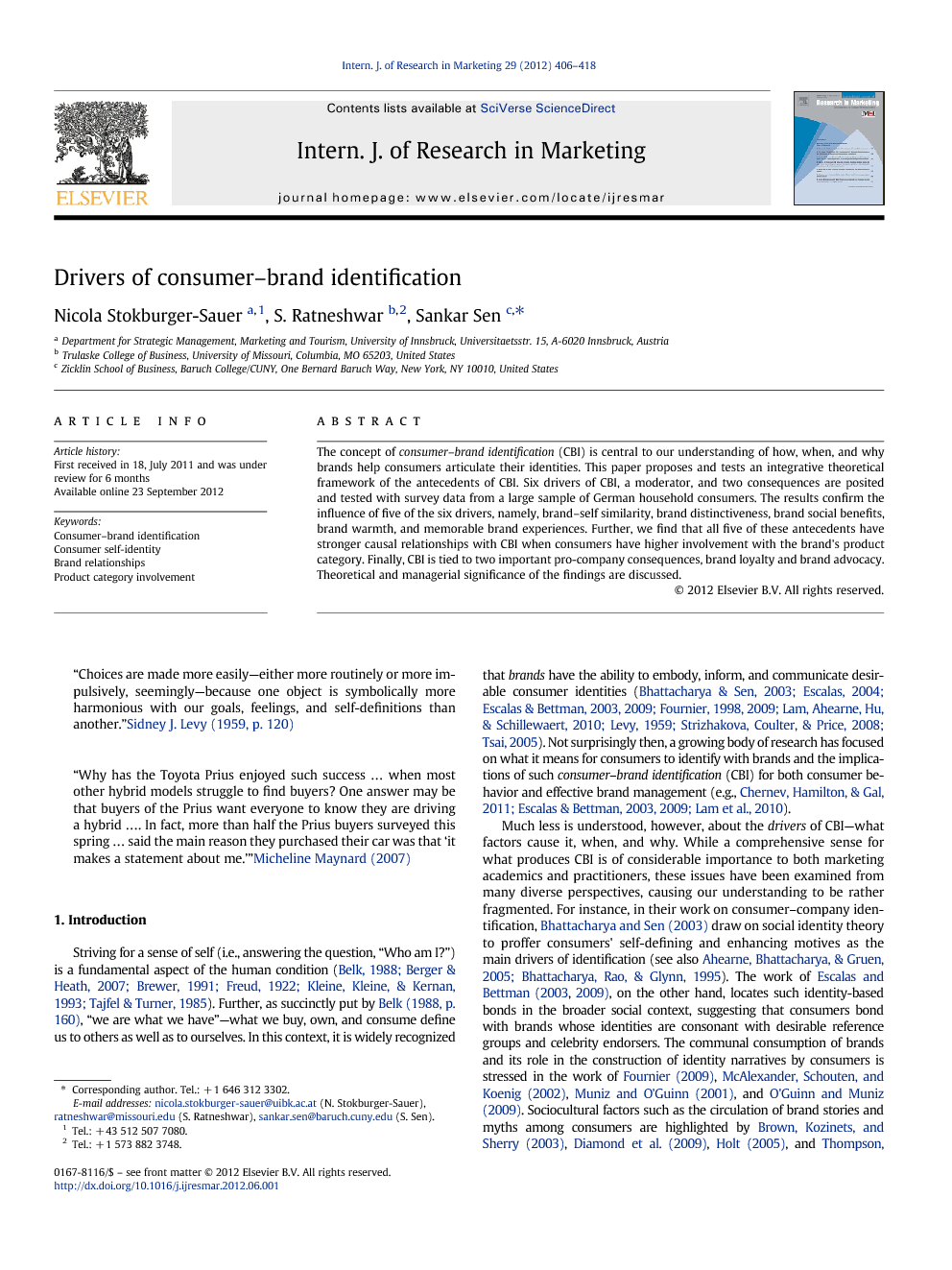 The concept of consumer–brand identification (CBI) is central to our understanding of how, when, and why brands help consumers articulate their identities. This paper proposes and tests an integrative theoretical framework of the antecedents of CBI. Six drivers of CBI, a moderator, and two consequences are posited and tested with survey data from a large sample of German household consumers. The results confirm the influence of five of the six drivers, namely, brand–self similarity, brand distinctiveness, brand social benefits, brand warmth, and memorable brand experiences. Further, we find that all five of these antecedents have stronger causal relationships with CBI when consumers have higher involvement with the brand's product category. Finally, CBI is tied to two important pro-company consequences, brand loyalty and brand advocacy. Theoretical and managerial significance of the findings are discussed.

Striving for a sense of self (i.e., answering the question, “Who am I?”) is a fundamental aspect of the human condition (Belk, 1988, Berger and Heath, 2007, Brewer, 1991, Freud, 1922, Kleine et al., 1993 and Tajfel and Turner, 1985). Further, as succinctly put by Belk (1988, p. 160), “we are what we have”—what we buy, own, and consume define us to others as well as to ourselves. In this context, it is widely recognized that brands have the ability to embody, inform, and communicate desirable consumer identities ( Bhattacharya and Sen, 2003, Escalas, 2004, Escalas and Bettman, 2003, Escalas and Bettman, 2009, Fournier, 1998, Fournier, 2009, Lam et al., 2010, Levy, 1959, Strizhakova et al., 2008 and Tsai, 2005). Not surprisingly then, a growing body of research has focused on what it means for consumers to identify with brands and the implications of such consumer–brand identification (CBI) for both consumer behavior and effective brand management (e.g., Chernev et al., 2011, Escalas and Bettman, 2003, Escalas and Bettman, 2009 and Lam et al., 2010). Much less is understood, however, about the drivers of CBI—what factors cause it, when, and why. While a comprehensive sense for what produces CBI is of considerable importance to both marketing academics and practitioners, these issues have been examined from many diverse perspectives, causing our understanding to be rather fragmented. For instance, in their work on consumer–company identification, Bhattacharya and Sen (2003) draw on social identity theory to proffer consumers' self-defining and enhancing motives as the main drivers of identification (see also Ahearne et al., 2005 and Bhattacharya et al., 1995). The work of Escalas and Bettman (2003, 2009), on the other hand, locates such identity-based bonds in the broader social context, suggesting that consumers bond with brands whose identities are consonant with desirable reference groups and celebrity endorsers. The communal consumption of brands and its role in the construction of identity narratives by consumers is stressed in the work of Fournier (2009), McAlexander, Schouten, and Koenig (2002), Muniz and O'Guinn (2001), and O'Guinn and Muniz (2009). Sociocultural factors such as the circulation of brand stories and myths among consumers are highlighted by Brown, Kozinets, and Sherry (2003), Diamond et al. (2009), Holt (2005), and Thompson, Rindfleisch, and Arsel (2006). Thomson, MacInnis, and Whan Park (2005) and Park, MacInnis, Priester, Eisingerich, and Iacobucci (2010), on the other hand, emphasize the role of emotional reactions to the brand in the formation of consumer–brand connections. It is also worth noting that while it is assumed that CBI can occur in a wide range of categories, empirical research in this domain has usually been restricted to single category studies (e.g., Lam et al., 2010), thereby precluding a deeper understanding of the category-specific determinants, if any, of CBI. Given this backdrop of fragmented insights into the drivers of CBI, the present paper makes three key contributions. First, it synthesizes a wide range of ideas pertaining to identity construction, identification, and brand relationships to provide a comprehensive conceptual framework for the determinants of CBI. The outcome of our conceptual synthesis is a set of six antecedents of CBI that includes three primarily cognitive variables (brand–self similarity, brand distinctiveness, and brand prestige) as well as three affectively rich brand-related factors (brand social benefits, brand warmth, and memorable brand experiences). Second, to strengthen the validity of our conceptual framework and to go beyond extant single-category examinations of CBI (e.g., Lam et al., 2010), we implicate an important category-level variable—product category involvement—as a moderator of the relationships between CBI and its various drivers. Additionally, we relate CBI to two key consequences: brand loyalty and brand advocacy. Finally, in the process of establishing this nomological network for CBI, we develop a valid, parsimonious measure of this focal construct that attempts to assess the state of CBI more independently of its antecedents and consequences (e.g., social rewards, negative affective states produced by discontinued brand usage) than extant measures (e.g., Lam et al., 2010). Next, we develop our conceptual framework culminating in a set of predictions pertaining to the antecedents and consequences of CBI. We then test our hypotheses with survey data from a large sample of German household consumers. The paper ends with a discussion of the theoretical and managerial significance of our findings.