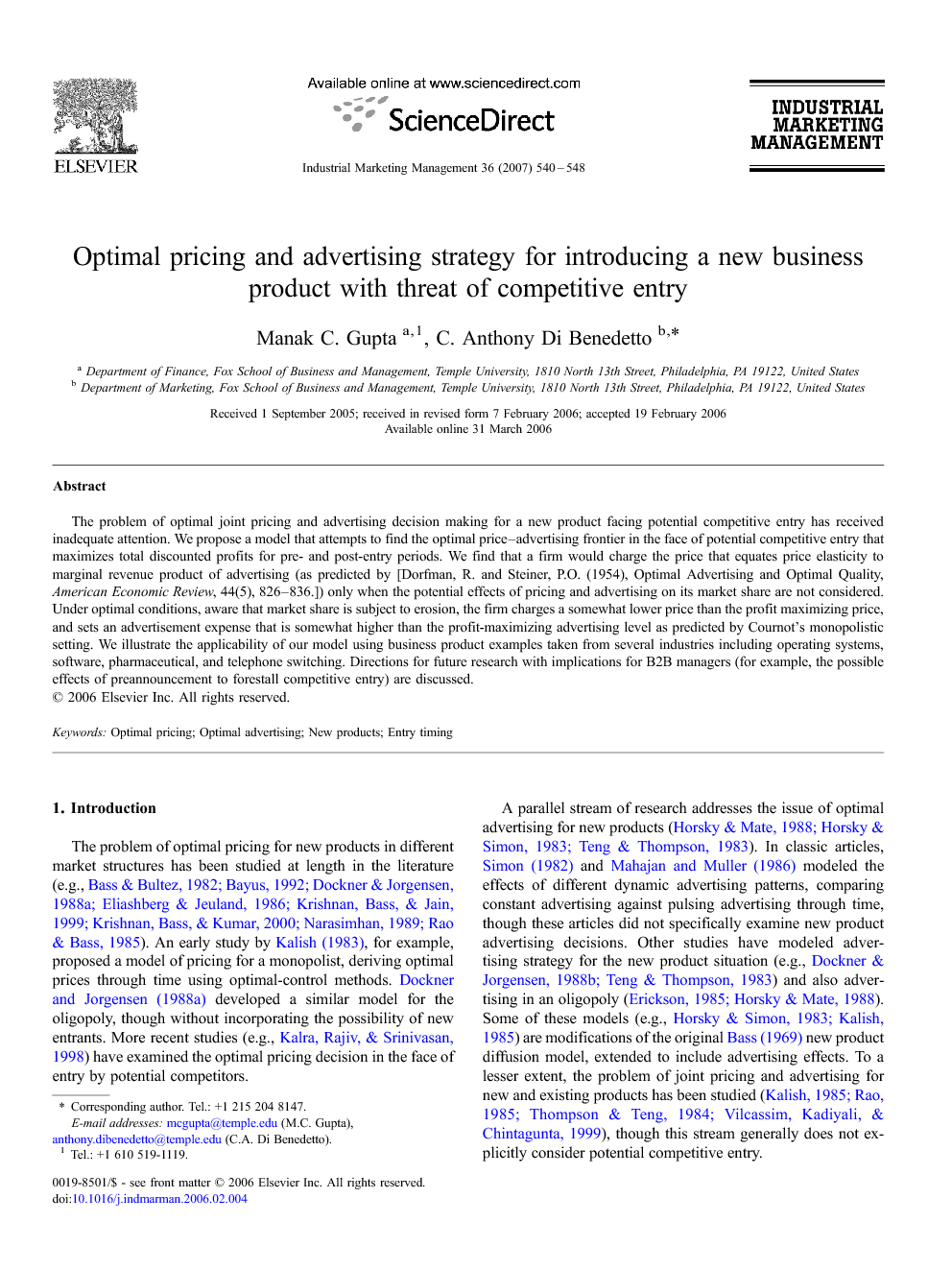 The problem of optimal joint pricing and advertising decision making for a new product facing potential competitive entry has received inadequate attention. We propose a model that attempts to find the optimal price–advertising frontier in the face of potential competitive entry that maximizes total discounted profits for pre- and post-entry periods. We find that a firm would charge the price that equates price elasticity to marginal revenue product of advertising (as predicted by [Dorfman, R. and Steiner, P.O. (1954), Optimal Advertising and Optimal Quality, American Economic Review, 44(5), 826–836.]) only when the potential effects of pricing and advertising on its market share are not considered. Under optimal conditions, aware that market share is subject to erosion, the firm charges a somewhat lower price than the profit maximizing price, and sets an advertisement expense that is somewhat higher than the profit-maximizing advertising level as predicted by Cournot's monopolistic setting. We illustrate the applicability of our model using business product examples taken from several industries including operating systems, software, pharmaceutical, and telephone switching. Directions for future research with implications for B2B managers (for example, the possible effects of preannouncement to forestall competitive entry) are discussed.

The problem of optimal pricing for new products in different market structures has been studied at length in the literature (e.g., Bass and Bultez, 1982, Bayus, 1992, Dockner and Jorgensen, 1988a, Eliashberg and Jeuland, 1986, Krishnan et al., 1999, Krishnan et al., 2000, Narasimhan, 1989 and Rao and Bass, 1985). An early study by Kalish (1983), for example, proposed a model of pricing for a monopolist, deriving optimal prices through time using optimal-control methods. Dockner and Jorgensen (1988a) developed a similar model for the oligopoly, though without incorporating the possibility of new entrants. More recent studies (e.g., Kalra, Rajiv, & Srinivasan, 1998) have examined the optimal pricing decision in the face of entry by potential competitors. A parallel stream of research addresses the issue of optimal advertising for new products (Horsky and Mate, 1988, Horsky and Simon, 1983 and Teng and Thompson, 1983). In classic articles, Simon (1982) and Mahajan and Muller (1986) modeled the effects of different dynamic advertising patterns, comparing constant advertising against pulsing advertising through time, though these articles did not specifically examine new product advertising decisions. Other studies have modeled advertising strategy for the new product situation (e.g., Dockner and Jorgensen, 1988b and Teng and Thompson, 1983) and also advertising in an oligopoly (Erickson, 1985 and Horsky and Mate, 1988). Some of these models (e.g., Horsky and Simon, 1983 and Kalish, 1985) are modifications of the original Bass (1969) new product diffusion model, extended to include advertising effects. To a lesser extent, the problem of joint pricing and advertising for new and existing products has been studied (Kalish, 1985, Rao, 1985, Thompson and Teng, 1984 and Vilcassim et al., 1999), though this stream generally does not explicitly consider potential competitive entry.

We note that the extant literature on optimal advertising and pricing decisions for new products is lengthy, but has given inadequate attention to the joint pricing–advertising policy decision, in particular in the realistic case of introducing a new product into a market where potential competitors threaten to enter the market. In the model described in this study, we have considered the market for a new product in which the seller is aware of the potential effects of his pricing and advertising policies on his market share. The optimal price–advertisement frontier was developed so as to maximize the total discounted profits over the entire period, under the assumption that the firm's market share is a non-decreasing function of advertisement expense and a non-increasing function of product price. The nature of dependence, under optimal policy, between pricing and advertising has been investigated and the exact conditions for optimal price–advertising mix under varying shades of competitive–monopolistic situations have been identified. It has been shown that a firm would behave in the manner suggested by Dorfman and Steiner (1954) and charge the price that equates price elasticity to marginal revenue product of advertising only when the potential effects of pricing and advertising on its market share are excluded from consideration. Under optimal conditions, cognizant of the possible erosion of its market share, the firm charges the price that is somewhat lower, and sets the advertisement expense that is somewhat higher than the profit maximizing price and advertisement in the Cournot's monopolistic setting. Also, it is shown that while a small firm determining its optimal price–advertising mix is likely to focus more on the effects on its market share, a large firm cannot be oblivious of the effects of its pricing and advertising on the total demand. The latter effect loses its significance, however, as the industry approaches a static state with only negligible possible effect of price and advertisement on the total industry demand. We have used examples in the computer software, operating system, pharmaceutical, and telephone switching equipment industries to illustrate how our model applies in typical B2B situations.