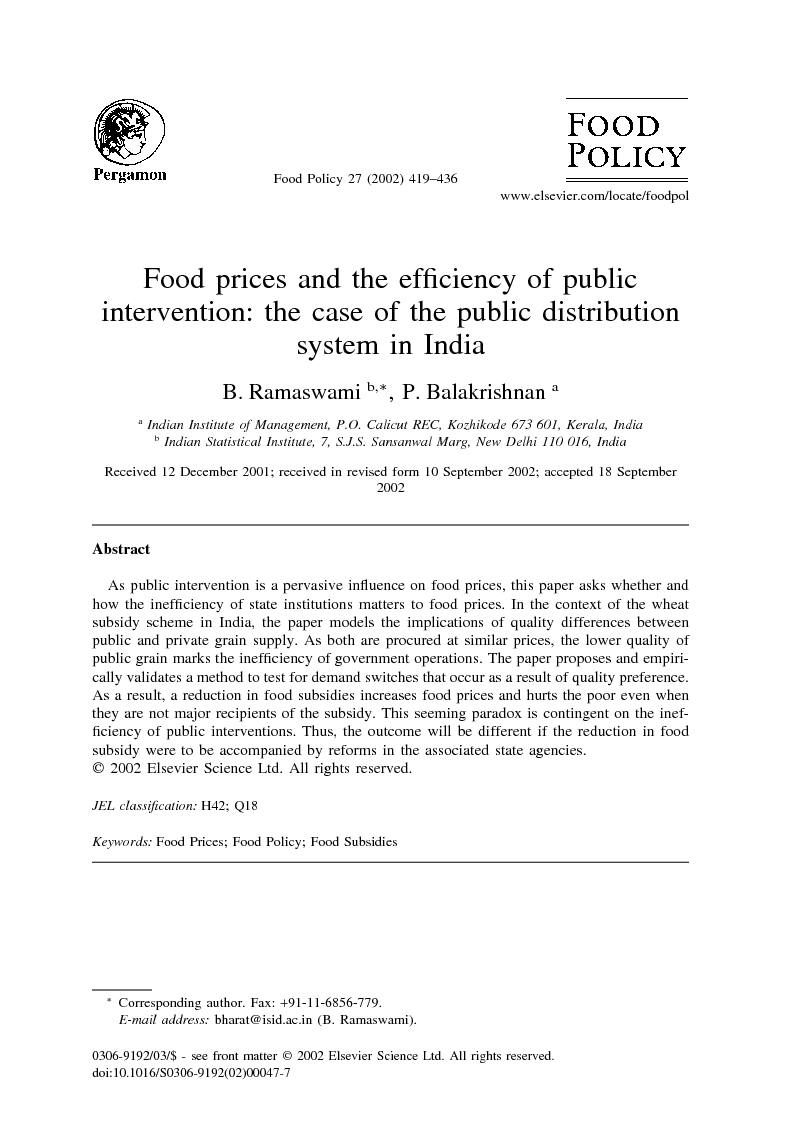 As public intervention is a pervasive influence on food prices, this paper asks whether and how the inefficiency of state institutions matters to food prices. In the context of the wheat subsidy scheme in India, the paper models the implications of quality differences between public and private grain supply. As both are procured at similar prices, the lower quality of public grain marks the inefficiency of government operations. The paper proposes and empirically validates a method to test for demand switches that occur as a result of quality preference. As a result, a reduction in food subsidies increases food prices and hurts the poor even when they are not major recipients of the subsidy. This seeming paradox is contingent on the inefficiency of public interventions. Thus, the outcome will be different if the reduction in food subsidy were to be accompanied by reforms in the associated state agencies.

Public intervention is a pervasive influence on food prices in many countries. A large literature has built around the study of these interventions. In developing countries, these interventions are implemented by various state agencies and parastatals buying and selling food. Although it is known that the state marketing institutions perform their duties with varying efficiency, the literature has not paid as much attention to this issue as it does to the intervention itself. Does the inefficiency of state institutions matter to food prices and to the outcome of food policies? The point of this paper is to answer this question in the context of the wheat subsidy scheme in India. It is usual for food subsidy schemes to operate along with private food markets. Comprehensive rationing schemes, where the state is the single intermediary between consumers and producers and has the monopoly over all domestic and foreign trade, were prevalent in the erstwhile socialist states. In most countries, however, food subsidy schemes are partial (Ahmed, 1988 and Yitzhaki, 1990). Not all consumers receive the subsidy (such as, for instance, when the scheme is restricted to urban consumers) and neither is the government the sole buyer from the producers. It is then the case that many consumers depend, partially or wholly, on purchases from the market. It is apparent that, in partial subsidy schemes, the welfare of agents (both producers and consumers) depends not only on the price at which the government buys and sells food but also on the market price of food. The impact of a food subsidy scheme therefore depends on how the market price of food varies with the subsidy. Modeling this relationship is the object of our study. The income transfers to households that receive subsidies may be expected to increase the demand for all market goods including market food (Sicular, 1988). This suggests that the market price of food should increase with subsidies. The reasoning is as follows. As long as the subsidy is positive, and if the market food is an exact substitute of subsidised supplies, consumers purchase food from the market only after exhausting their ration entitlement of subsidised food. The market demand of these consumers depends on the income received as price subsidy. A small increase in subsidy produces an income effect, which raises the demand for market food and thus its price.1 While the literature contains theoretical analyses of partial food subsidy schemes, there has been, to the best of our knowledge, no empirical estimate of the impact of food subsidies on the market prices of food. We investigate this relationship in the context of the wheat subsidy scheme in India, and discover that the market price varies inversely with the subsidy. This is contrary to the prediction noted in the earlier paragraph. The failure to match prediction cannot be ascribed to negligible income effects as that would, at best, lead market prices to be invariant to subsidy.2 The explanation must therefore lie in the possibility that consumers regard grain (wheat) from different sources (the government and the market) as imperfect substitutes. We propose and empirically validate a model in which consumers perceive subsidised grain as inferior in quality to market grain. In this model, income effects are not the only consequence of food subsidies. Consumers switch demand between government and market supplies depending on the level of subsidy. Such demand switches can overwhelm income effects and explain the empirical relationship in the Indian wheat market. In our interpretation, we argue that the functioning of state institutions is responsible for producing this outcome. Since the government and private trade procure wheat at similar prices, the lower quality of government wheat at the retail level marks the inefficiency of government operations. While this is also the finding of case studies and consumer surveys, the literature has neglected to analyse the implications of quality difference for food prices and subsidy interventions (Nair and Sivanandan, 1995 and Indrakant, 2000). These findings are relevant for analyzing the consequences of reducing food subsidies. For fiscal reasons, governments in poor countries are often under pressure, from international creditors, to trim subsidies. Such measures, however, encounter political resistance especially when organized interests capture subsidies. When food subsidies are badly targeted, the poor are not beneficiaries of food subsidies and a subsidy reduction might seem desirable from efficiency and equity points of view. Such reasoning is incomplete as the effect of subsidy reduction on market price must be taken into account. If the income effect dominates, reducing subsidies would allow food prices to fall and poor consumers, without access to food subsidies, would be better off. But if, as we find for wheat in India, subsidies vary inversely with food prices, then the poor are worse off because of the higher prices following subsidy reduction. This seeming paradox where the poor are worse off by subsidy reduction even when they do not receive them is contingent on the inefficiency of public interventions. Thus, the outcome will be different if the reduction in food subsidy is accompanied by reforms in the associated state agencies.

As in many countries, the food subsidy in India is poorly targeted. Many of the poor receive insignificant amounts of subsidy and depend on the market to access supplies. In spite of this, a reduction in the food subsidy is not in their interest as the reduction in subsidy increases the market price of food. This result, as discussed in the introduction, will not be the outcome if consumers regarded grain from government supplies to be identical to the grain from the market. For, if the two were perfect substitutes, a reduction in the subsidy would decrease the market price or leave it unchanged depending on the strength of the income effect. Demand switches will not occur because as long as the market price remains higher than the ration price, consumers will not switch demand from the subsidised grain to market grain. Econometrically, consumer behaviour in the Indian wheat market is better described by a model where consumers view the subsidised grain and market grain as imperfect substitutes and therefore switch demand between the market and the public distribution system according to the extent of subsidy in relation to the quality difference between the two sources. Methodologically, our contribution is a procedure which validates the demand-switching model using only aggregate data on public grain sales and prices. The method could therefore be applied to other countries as well. Our finding implies that if the reduction in the food subsidy in India were to be accompanied by other institutional reforms, the market price of food may not rise. Any serious reform would address consumer perceptions of quality. Why do they regard publicly supplied grain of lower quality? It is, after all, not a deliberate policy of the government to procure lower quality of grain.15 In the case of wheat, government purchases take place at market prices, which means that private traders acquire comparable quality grain at the same prices as the government. At the point of sale, evidently, consumers do not regard the grain from the two sources as identical. Clearly, relative to the grain in the market, consumers demand a discount on their purchases from the state marketing network, which represents their costs of transacting with the ration shops. The appearance of quality differences at the retail outlets is due to inefficiencies in the marketing chain, such as poor purchase decisions, lack of care in storage and handling, and indifferent and uncertain service at the ration shops. Therefore, unless the state institutions involved in the implementation of the food-subsidy regime are reformed, subsidy reductions will hurt even those among the poor who are not recipients of the subsidy. A fundamental implication of our finding is that for any given level of the subsidy, the market price of wheat is higher than what it would be if government grain were of the same quality as the market grain. The general point emerging then is that the inefficiency of the state institutions that implement food policy is central to market outcome and thus the welfare of the poor. A less obvious reform in the current scenario in India would be for the government to downsize the procurement of grain. If the government were to procure less, it can offer a lower procurement price and the market price would accordingly be lower as a result of larger supplies in the market. Thus, subsidy reduction coordinated with lower procurement, may not lead to an increase in food prices. Such broader reform might also be necessary if subsidy reduction is to make a sizeable dent on government expenditure. We have seen that a reduction in subsidy leads consumers to switch their demand to the market. As a result, while government expenditure declines because of the decrease in public grain sales and in the per unit subsidy, it increases on account of larger stocks of grain if procurement remains unchanged. This suggests that subsidy reduction attempted through a hike in the ration price might not achieve its intended objective. It should not be difficult in future work to extend our analysis to obtain quantitative estimates of the impact of such subsidy reduction on government expenditures.