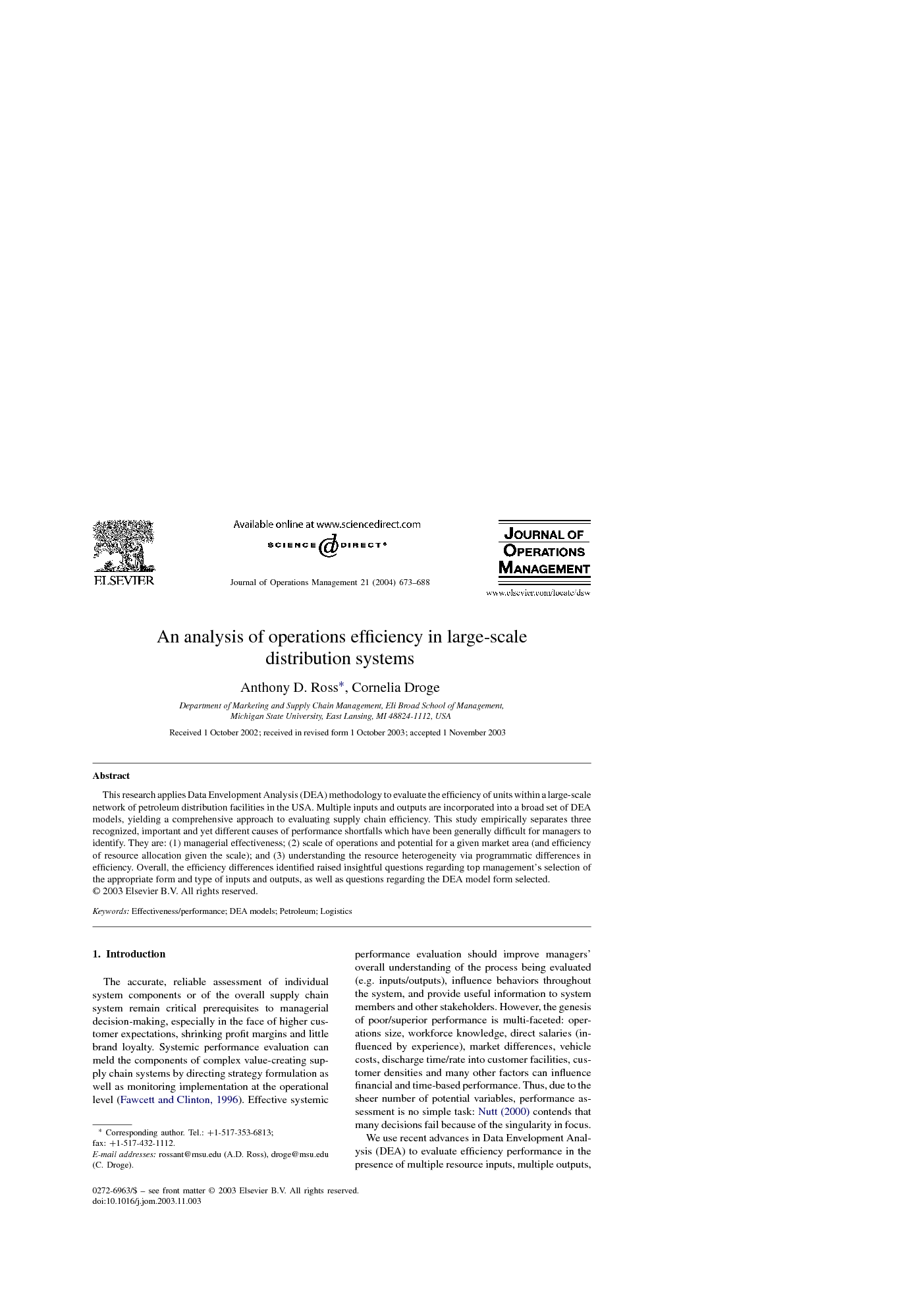 This research applies Data Envelopment Analysis (DEA) methodology to evaluate the efficiency of units within a large-scale network of petroleum distribution facilities in the USA. Multiple inputs and outputs are incorporated into a broad set of DEA models, yielding a comprehensive approach to evaluating supply chain efficiency. This study empirically separates three recognized, important and yet different causes of performance shortfalls which have been generally difficult for managers to identify. They are: (1) managerial effectiveness; (2) scale of operations and potential for a given market area (and efficiency of resource allocation given the scale); and (3) understanding the resource heterogeneity via programmatic differences in efficiency. Overall, the efficiency differences identified raised insightful questions regarding top management’s selection of the appropriate form and type of inputs and outputs, as well as questions regarding the DEA model form selected.

The accurate, reliable assessment of individual system components or of the overall supply chain system remain critical prerequisites to managerial decision-making, especially in the face of higher customer expectations, shrinking profit margins and little brand loyalty. Systemic performance evaluation can meld the components of complex value-creating supply chain systems by directing strategy formulation as well as monitoring implementation at the operational level (Fawcett and Clinton, 1996). Effective systemic performance evaluation should improve managers’ overall understanding of the process being evaluated (e.g. inputs/outputs), influence behaviors throughout the system, and provide useful information to system members and other stakeholders. However, the genesis of poor/superior performance is multi-faceted: operations size, workforce knowledge, direct salaries (influenced by experience), market differences, vehicle costs, discharge time/rate into customer facilities, customer densities and many other factors can influence financial and time-based performance. Thus, due to the sheer number of potential variables, performance assessment is no simple task: Nutt (2000) contends that many decisions fail because of the singularity in focus. We use recent advances in Data Envelopment Analysis (DEA) to evaluate efficiency performance in the presence of multiple resource inputs, multiple outputs, unequally endowed operational units, and multiple hierarchical decision-making units. Our context is the efficiency evaluation of a petroleum distribution system in which 207 distribution centers (DCs) are organized into three regions, which report to corporate headquarters. DC managers compete internally for allocation of resources from corporate managers and externally for market share. While performance of such a system can be defined in many ways, we focus on efficiency of resource input use in relative rather than absolute terms (as in the engineering disciplines). Some resource decisions are of a strategic nature, are determined by top management and inherited by local managers, and are classified as non-discretionary; in contrast, discretionary resource decisions are tactical and determined by DC managers (e.g. workforce profiles in the form of driver experience). As in our case, decision-making units are generally within a larger organizational hierarchy where multiple inputs are used to produce multiple outputs and thus both the managerial and inherent efficiencies of units need to be addressed. Corporate logistics managers wanted to know what fundamental change in distribution strategy was required (if any), while DC managers were concerned primarily with the tactical issues reflecting only on their individual performance. Past DEA studies (Seiford, 1996) have addressed many arenas such as schools and libraries; but few have considered supply chain contexts similar to ours which focuses on the heterogeneity of resources within the firm. This research draws on previous work to advance the construction and comprehensive testing of models of distribution efficiency, and we extend past research in a number of ways. First, Kleinsorge et al. (1989) used DEA efficiency scores in allocating transportation resources, and Ross et al. (1998) incorporated DEA targets for network redesign, thus rationalizing consolidation. The current study goes further by examining efficiency differences among units within a large operation, without focusing on the mechanics of system design. Second, Gillen and Lall (1997) and Sarkis (2000) have studied airport efficiency using several versions of DEA, but only the later study explored structural differences in efficiency. Our study also explores structural differences, but goes further by examining alternative pairings of input variables within different process views (following recent developments in Brockett and Golany (1996)). Third, Aida et al. (1998) applied DEA-RAM to Japanese water distribution systems, but did not address the impact of their ‘uncontrollable’ variable. Although similar in many ways to the current study, we go further by addressing (1) inherent efficiency versus efficiency attributable to effective management and (2) the impact of non-discretionary variables. Fourth, Seiford and Zhu (1998) analyzed the sensitivity of input/output levels for efficient units. However, their approach cannot completely explore differences between units or between groups of units, unlike the approach we advocate in the current research. Interesting managerial implications emerged from this study: for example (1) several models can appropriately assess performance of all DCs simultaneously, which allows comparison of overall performance from several strategic viewpoints; (2) inherently good operations can be distinguished from operations that are managed well, which may be useful in determining managerial incentives for sub-par performers; (3) scale diseconomies identify market opportunities for expansion/downsizing; and (4) non-discretionary variables can be important to an assessment, but their use appears contextual and inclusion is a decision of stakeholders. In summary, we first evaluate distribution performance from several strategic process views in order to understand the general nature of efficiency. Second, we identify and differentiate managerial efficiency, scale efficiency (SE), and programmatic efficiency. Third, we explore (using parametric tests) the efficiency impact of variables that may not be directly controlled. The paper is organized as follows: Section 2 summarizes the DEA methodology utilized in this paper; Section 3 discusses efficiency measurement in supply chains; Section 4 discusses our results and Section 5 concludes with interpretations of the study.

For supply chain managers in general and strategic managers in particular, this study demonstrates that DEA can be used to help empirically separate three recognized, important and different causes of performance which have been generally difficult for managers to identify. They are: (1) managerial effectiveness; (2) scale of operations and potential for a given market area; and (3) efficiency of resource allocation given the scale. We have illustrated that indeed, DEA still has unrealized potential in providing a better empirical and theoretical base for resource-based operations and their capabilities to perform. We presented and evaluated eight process views of a large-scale service operation, illustrating the managerial complexity of objectively accounting for program differences, scale differences, and discretionary differences while evaluating decision-making units. These process views corresponded to alternative paradigms for measuring operations performance. However, it was not the aim of this research to be prescriptive based on the analysis of this specific problem; rather, our aim was to present a real-world problem and develop a framework for testing several efficiency models. Several key operational insights into the problem environment were discovered, based on the empirical data provided. These insights were developed from the separation of managerial and programmatic efficiencies, the investigation of scale efficiency, and from developing performance improvement alternatives through input mix changes. Consider, for example, the case of inefficient DCs. The models we tested generally suggested a reduction in inputs such as fleet size. Realistically, reduction in fleet size may be very difficult, and the question remains as to what exactly should be done with excess vehicles. Also, how would managers reduce the experience level? This suggests the layoffs of more experienced personnel and/or the hiring of less experienced personnel. Even when downsizing, this is a difficult decision. There is a tradeoff between removing excess inputs and increasing output levels. In the general case, deeper market penetration goals or complete redesign of the supply network requires consideration by top managers. This research used the downstream petroleum industry as the backdrop for measuring supply chain efficiency. The particular sample firm is actually a cooperative in which the customers are also the stakeholders of the firm. Customers are the beneficiaries of superior performance of decision makers in manufacturing or service environments. Resource performance is a driver of competitive results, and this study shows how posterior analyses of program and scale differences in the entire supply network are of strategic benefit. As a contribution to the advancement of theory in the logistics literature, our development has balanced the need for model formulation and testing with an external validation while controlling for non-discretionary variables. The results from this study raise some important further questions about the congestion of inputs; the nature of temporal efficiency using malmquist indices to investigate policy implications for operations scale changes was recently proposed in Sueyoshi and Aoki (2001). Comparative advantage among supply chain components and competitors is another important dimension. Investigation and explanation of these questions lies beyond the scope of this paper, but they are clearly extensions to this stream of research.